Greetings Otherworld travelers.  Welcome to a new week full of promise and possibilities.  We’re starting the week off with a stunning fantasy from an author we’ve had the great privilege of working with before.

M.K. Theodoratus is building a persistent fantasy world here in the Far Isles.  In The Pig Wars: A Tale of the Half-Elven, Theodoratus further explores what it means to be a half-elf, diving deeper into cultural interactions, forbidden magic, and the wars that may be on the horizon.  Just as in her previous tales, the author includes a lot of strong emotion here, and not all of it is healthy emotion.  While the care between the main character and her prized pig are adorable, the villain’s lust for both power and the half-elf maiden he covets is frightening, and leads to terrible consequences. 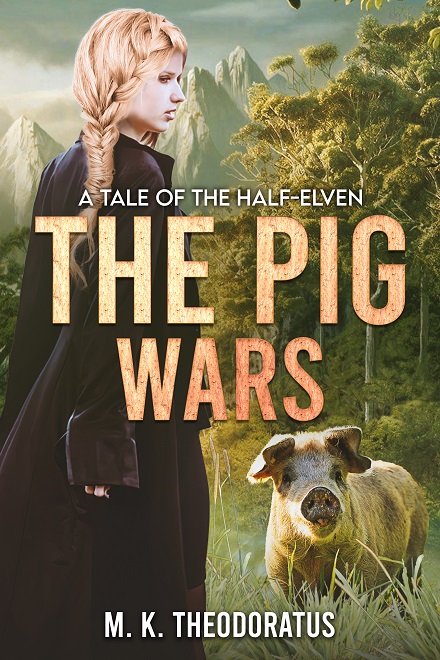 The Half-Elven are fighting over who will rule the Marches.

After inadvertently causing her father’s death with her magic in battle, Lady Renna avoids the political in-fighting among the Half-Elven of the Marches. She spends her days weaving and managing her lands, trying to heal from the trauma. But this fragile peace frays…

Renna’s neighbor, Lord Gorsfeld, has plans for the retiring young woman. As the richest man in the Marches, but one without magic, he decides to woo Renna to gain control of her magic and her lands, by setting himself up as a strong protector, who can save her from the marauders who harass her border villages. However, his campaign goes awry when Black Tail, Renna’s pet pig, dumps him in the mud and injures his self-importance.

Gorsfeld intensifies his vandalism, hoping to scare Renna into his arms. Renna must fight to protect her people without angering the Lord High Commander of the Marches who expects his childhood friend to help him keep the peace. But she is caught off guard and is forced to use forbidden elf-fire to protect her people.

Renna discovers she must fight for her life.

For those looking for a magical world to be explored, Theodoratus has plenty in store for her new fans.  All along the way, the author works wonders with her prose, making this an addictive and entertaining read indeed.  There are hints at more to come from the Far Isles, and if the author’s previous passion for her work are any indication, we’ll have another book on the way soon enough.  With that in mind, there’s no better time to dive into this massive new foray into the Far Isles.  Check out The Pig Wars: A Tale of the Half-Elven on Amazon today, and don’t forget that you can read it for free if you have Kindle Unlimited!

Feel free to copy the link, https://www.amazon.com/dp/B09HR9PJFT, and post about it on social media!