Phew!  It’s been over a month since I’ve had the opportunity to feature an Otherworld promo on the site (though Kev was gracious enough to help out while I was gone).  I’d nearly forgotten how to do it!

Luckily, I have a decent story to share with you today which has pushed me right back into that zone.  I’m a huge dog lover, and I feel like they aren’t used enough in fantasy.  Then I met Lola.

Elbot Carman has put together a wonderful little book that is intended for young adults between grades four and nine, but Lola the Buhund and the Empty Sky can be appropriate for all ages.  It’s been inspired by a lot of different things, including Pacific Northwest Native American tales for the basis of the story’s plot; with Shinto mythology and elements of Ireland’s countryside, Central Alaska’s wilderness, and Indian culture.  I love that there is a lot of interpretative folklore as a basis here, and I was won over easily by the canine protagonist. 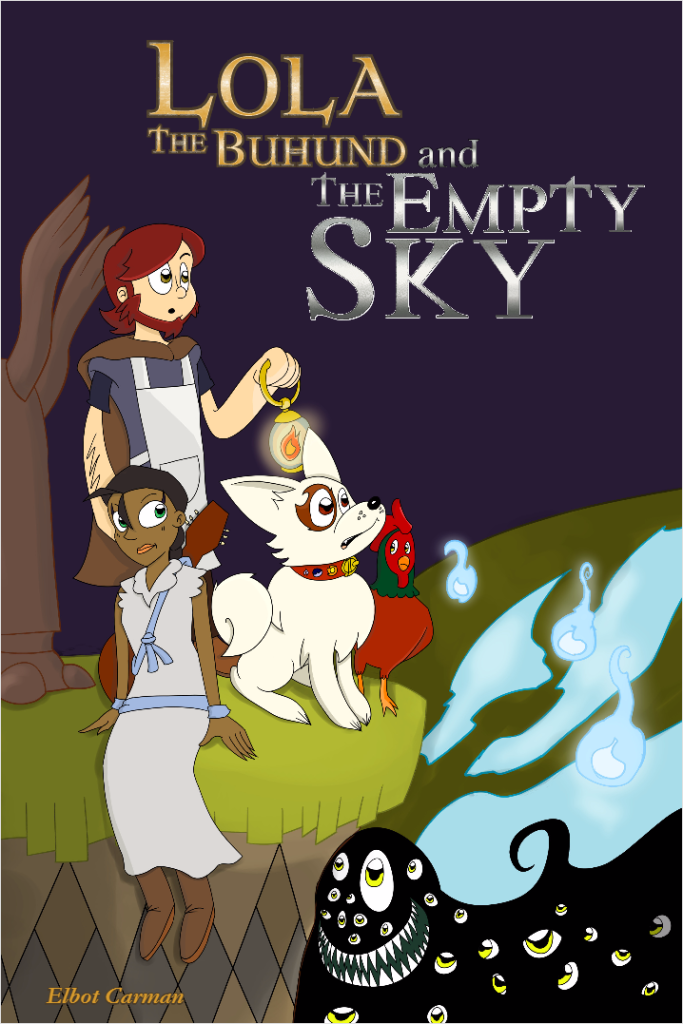 Rejected by her mother as a pup, Lola is raised by a reclusive carpenter a decade and a half into one of her world’s most trying times. The world of Lumea went dark thirteen years before her birth – the sun, moon, and stars vanishing from the sky without a trace. In a harsh and inhospitable environment, it seems only the country of Prithvi has managed to survive.

Never knowing what the world was before, Lola and her human are thrust into a journey to uncover where the world’s light has gone. Gifted the ability to speak by a spell gone awry and joined by a party of colorful characters; the road ahead of her is filled with monsters, evil spirits, and the soldiers of a cruel and selfish monarch.

Lola the Buhund and the Empty Sky is a charming tale made all the more appealing by it’s illustrations.  Inspired by the works of Naoto Ōshima (the early designer for Sonic the Hedgehog), Carman’s world of Prithvi comes to life in a gorgeous way.

If you’re interested in Lola and her quest, take a look at her story, which is currently funding on Inkshares.