Greetings Otherworld travelers, and welcome to our third promotion of the week!  Today, we’re diving into a world that’s been decades in the making, and it shows in its richness and forethought.  Read on to learn more about AZLATAN: The End of Time.

Author Susan L. Henderson Alandar might have you believe that she’s a brand new author, wet behind the ears, but she’s been honing her considerable skills for many years now.  Her debut, AZLATAN: The End of Time, has therefore had plenty of time to find refinement and improvement over that time.  It is an enthralling, rich world, featuring a culture that feels very elaborate and deliberate.  Its strong, vivid prose immerses readers in the world, and witty dialog has them interested in the characters in a snap.  Alandar also does a great job of capturing her action sequences, which has fans eager to dive into one chapter after the next. 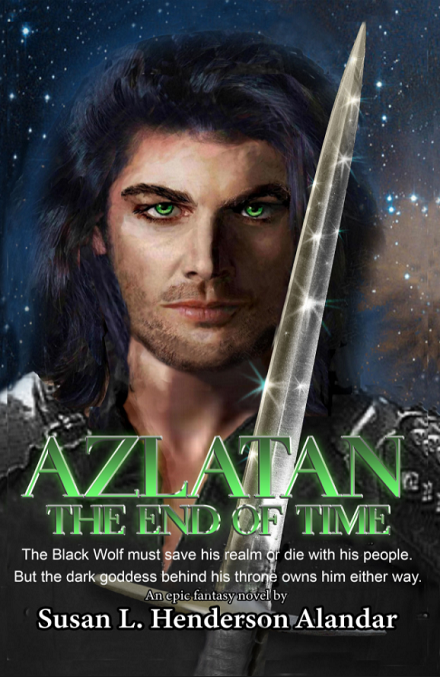 THE HIGH KING. The Black Wolf must save his realm or die with his people. But the dark goddess behind his throne owns him either way. He has been warned never to call on her while living, but his purpose is to save Azlatan…AT ANY PRICE.

SHAHALI…One magic god, three magic goddesses. They closed Azlatan’s borders with magic and promised a thousand years of peace. TIME IS UP.

PROPHECY. The ruling race is Doanhe; the serving race is Namor. Love is forbidden between them because a child of their union will bring the End of Time. THE ENDBRINGER IS HERE.

MARRE was promised to the High King at birth. SHE WANTS HER FREEDOM.

THE CHAINE leads a nation of warriors sworn to protect the King and his country. Immune to magic, they can travel outside Azlatan and know THERE IS ANOTHER WORLD CLOSING IN.

This epic fantasy whispers of Athurian legend, full of action, adventure, magic, and mystery…and a cast of characters you will never forget!

AZLATAN is  filled with twists and turns, mysteries and revelations, and some brewing will-they, won’t-they romantic possibilities.  Everything falls in its place, and the epic story feels as though it has gone through the paces, finally coming out just when it should have.  You can tell that AZLATAN is the culmination of a life’s worth of passion, planning and determination.  The author took all of her experiences and distilled it into this heartfelt and immersive world, and it’s because of those traits that it feels so rich and real.  It’s really deserving of a sequel, so show Alandar’s explosive new debut some love.  Check out AZLATAN: The End of Time on Amazon today!