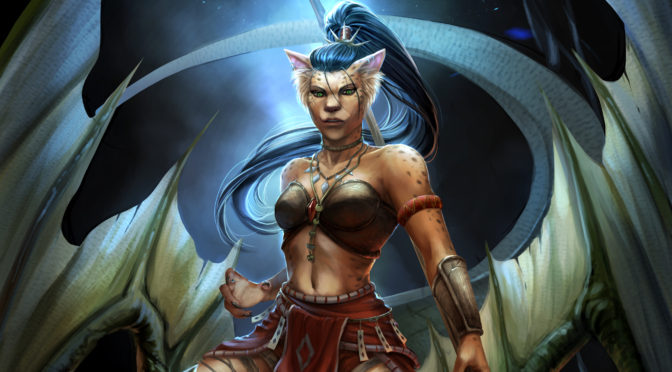 Dragonspeaker
A Tale by Michael DeAngelo
Chapter One: Cat of the Kehara

Crystalline granules of sand whipped about in a frenzy, scattering this way and that.  Even without the oppressive wind casting the dunes her way, she would have still had to deal with the sun.  Its radiance reflected off of the golden mounds, bright enough to blind anyone.  She was prepared though, several light layers of burgundy cloth wrapped around her face so that only a small portion of her eyes were visible, amber jewels that scanned the sands.

Kaiyonani let fly a deep breath that was caught by her headwear.  Saveon summers were difficult to endure, and that one was said to be one of the worst.  Still, she had a task to perform – one of the first in her life that she was trusted to partake of on her own accord – and she meant to perform it well.

She began another ascent up one of the steep dunes.  Her padded feet were perfect for scaling the rolling sand, and her outfit, scarce as it was, allowed for mobility.  The staff at her side was used more for balance than prodding the ground.  Indeed, she often held it just above the surface.  Her youthful body had become toned and strong from such endeavors.

As Kaiyonani reached the peak of that tall mound, she finally allowed herself some respite.  With a firm tap, she rooted the staff in the sand, and braced against it.  A slow, deep breath filtered in through the sash, and she relished in the cooler, clear air that blew atop the dune.  Free of the harsh sand, she reached up and tugged on her makeshift mask.  As the sash lowered, it revealed her feline features.

Kaiyonani parted her lips and breathed in the cool zephyr that traveled atop the dunes.  Blinking away her fatigue, she ventured a glance over her shoulder.  The oasis she had left behind was so far away then.  She could barely see the palm trees casting down their shadows on the wide pool, nor the encampment that called the place home.  The zephyr intensified, and she could see those distant trees bend to the wind, and she watched as sand rolled over the dunes that surrounded the oasis.

Taking in one last breath of clean, unfiltered air, she labored at putting her mask back in place.  Staring out among the Kehara, through that thin band of her protective headwear, she could only reflect on what had transpired to lead her down her present path.

Haemado sat on bent knees, his hand gently stroking the uneven scales of the creature before him.  Those scales, once a lustrous shade of ochre, had faded into a dusky ecru.  With every labored breath, her body was losing its color.

The kaja elder didn’t dare to remove his hand, even as tears welled up beneath his eyes.  Every inhalation drew further than the one before, and her eyes barely opened.  He knew that she wouldn’t see him, but he couldn’t bear to sit on the other side of her, where the damage was most prevalent.

He wanted to remember her more fondly.

Iraneth grew far too weak to speak, but she made attempts anyway.  Haemado whispered to her to hush, that he knew everything that was important.  By then, the words she communicated between bouts of agony were in draconic anyway.  Even if the kaja had studied all of his life, he would not have been able to manage the mysterious inflections and harsh sounds that the mighty tyrant and all of her kind had mastered naturally.  No, dragonspeaker was more of a symbolic title, a promise that a bond had been made—an oath that two races had come together with the intention of always protecting the other.

Haemado bowed his head at that failure.  He understood that he was not to blame for the attack on Iraneth—he wasn’t even present when her injury had been incurred.  But that did nothing to alleviate the guilt that swelled inside.  When she arrived, there was not much time before her energy had been sapped.  Haemado could only understand a few words of her labored speech.  One word rang true, however: brood.

The kaja shook his head at his selfishness.  Of course she had offspring.  They had talked about it at length over the course of weeks, perhaps even months.  Haemado had yet to see them though.  Iraneth had told him then what he already knew.  A whelp was too young to introduce to a mortal.  They would imprint, and the dichotomy of the two races would be lost to the majestic creature.  They would, in essence, never understand what it meant to be a dragon.

Haemado was lost so deep in his thoughts that he didn’t realize at first that the dragon had not drawn breath in some time.  Hissing at himself, he cursed his selfishness once more.  He had not been present for the death of his truest friend—not fully anyway.  He looked into the closer of her large eyes, the iris clouded over and pupil impossibly small.  The dragonspeaker leaned forward and shut that eye with the palm of his hand.

It took some time for him to finally rise.  The oasis that he called home was not large, but a section of it had always been specified for Iraneth upon her visits.  The other kaja didn’t understand the relationship a dragonspeaker had with one of those creatures, but they revered them nonetheless.

When Haemado stepped away from his fallen companion, he looked to the far side of the oasis.  There, all his people stood in solidarity, burning candles in hand.

It was unbelievable to think that the inside of the hut could be hotter than the scorching desert sands.  When Kaiyonani entered, she nearly flung herself out again.  But Haemado, her grandfather, sat just before the fire, his eyes closed and his arms stretched wide.

“Grandfather, we must leave,” she protested.  “You’re bound to pass out from all this heat.”

Though he kept his eyes closed, Haemado let a one-sided grin show one of his fangs.  “You think Iraneth breathed fire that was cooler than this?  I will manage, and so will you.”

“I don’t understand,” she said.

He pointed one of his outstretched hands to the floor of the hut.  “Since we have lived here, the kaja have survived because of two things: cleverness and favorable alliances.  One of those was with Iraneth.  A dragonspeaker is a kaja tribe’s best hope to endure the hardships that the Kehara and indeed all of Saveon put forth upon us.  It is a title that is an honor to hold, and it is usually one that is held throughout a kaja’s life.

“I always believed that I would have more time to seek out my successor.  My bones are not yet brittle, and though my muscles ache more now than in my youth, they still have some years in them.  But my time as a dragonspeaker?  That is over.”

“What do you mean, Grandfather?” Kaiyonani asked.  “You’ll always be a dragonspeaker.”

“In title alone,” he said.  The kaja elder opened his eyes then, peering at his granddaughter.  “A bond like that can only be made once in a mortal’s lifetime.  It’s unheard of, but if a dragon should perish, their mortal is without a conduit forevermore.”

“What does that mean for our tribe? Without a dragon to protect us, the other kaja of the desert could overwhelm us.”

“Without a doubt,” he said.  “Though it will be some time before they hear news of Iraneth’s fall, when they do, our days on these sands would surely be limited.  Without a true dragonspeaker, we are at great risk.  This is why another dragonspeaker must be chosen.”

“Another?” Kaiyonani asked.  “There has only ever been one.  No tribe has ever had more than that.”

“These events are unprecedented.  There has never been such an occasion as this.  But I have closed my eyes and let the heat wash over me.  A vision has come to me, and a successor has been chosen.”

The flames flickered in Kaiyonani’s eyes as she realized why she had been summoned.  “Grandfather, you can’t mean—”

“It is true.  Surely you must have known that you were destined for this.  I may have some life in me yet, but I won’t be around forever.”

“I suspected Barrus would be the next dragonspeaker.”

Haemado grinned but shook his head.  “Barrus will make a fine leader for the tribe.  He is strong and fearless, but I can see in his eyes that he will always lack wisdom.  A dragonspeaker must be just as brave, and willing to endure, but they must also be cunning.  No, Kaiyonani, it was always you.”

She exhaled, uncertainty causing her breath to shudder.  “But I have no dragon.  We’ve seen none that aren’t accounted for in the skies.”

“A dragonspeaker must also know when to lie—or at least, when to omit the truth.  Another dragon waits in the sands.  Five, in fact.”  When he saw Kaiyonani’s brow furrow, he nodded.  “Iraneth had a brood.  They are without their mother now, and will need aid to survive the days ahead.  One of them will be the one you bond with.”

“You will learn, as we wall did,” Haemado returned.  “Consider this: when it was my turn to take up the mantle, the previous dragonspeaker had already passed on.  I will guide you as best I can.  I have no doubt that you will be the greatest dragonspeaker that ever lived.”

The elder kaja stood, and gathered a large wooden bowl from the side of his hut.  Without hesitation, he dumped its contents on the fire.  The water and the flame met, sending a sizzling protest into the air.  Steam fled to the room and the open chimney, and only a few embers remained behind.  Haemado traded his bowl for one of the pieces of tinder, charred black from the heat.

“We will spend several days preparing you for your journey, my child.  Even though that moment is on the horizon, we must treat it with the utmost urgency.”  He pressed the stick into the ground, rubbing the black into the dirt.  “First, you must know where you are going.”

Kaiyonani looked at the long stretch of the Kehara desert before her.  Sparkling sands were disappearing into the horizon, as far as the kaja could see.  It was the farthest she had ever been from home.  A glance over her shoulder proved that thought, for the oasis was no longer in sight.  Tall dunes obscured her view of it, though the setting sun assured her she would not be able to consider that homesickness for long.

There were still many miles to go, and long shadows would creep across the desert before long.  The dragonspeaker ascendant would have to consider the journey ahead in order to protect the paradise she had left behind.