Howdy everyone! We have a pretty cool item to show off today, courtesy of Azot’s awesome work.  In this set of concept art, we’ve already shown you a cursed goblet and a lantern that lets a user illuminate dark spaces without giving away their position.  Now, let’s see what other crazy things exist within the world of Tellest. 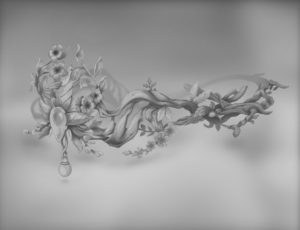 The Crown of Elven Kings is more than just a decorative headpiece.  If you’ve followed Tellest for a while, you know that the various tribes of elves share their powers between each of their members.  This was due to the events of The Fall, which separated elves from their magic.  The only way an elf restores their power is to have fewer elves in their tribe.  Well, that’s almost the only way…

With the Crown of Elven Kings atop an elf’s head, all of their people lose their powers.  Instead, that magical propensity is given in totality to the wearer of the crown.  Throughout history, there have been many elves who have donned the crown, and all for different reasons.  Some tribes gave their powers willingly to a chosen champion.  Others were left weakened and surprised when their powers were taken from them without warning.  No one knows where the crown is now, but it seems sure that it won’t be lost forever.