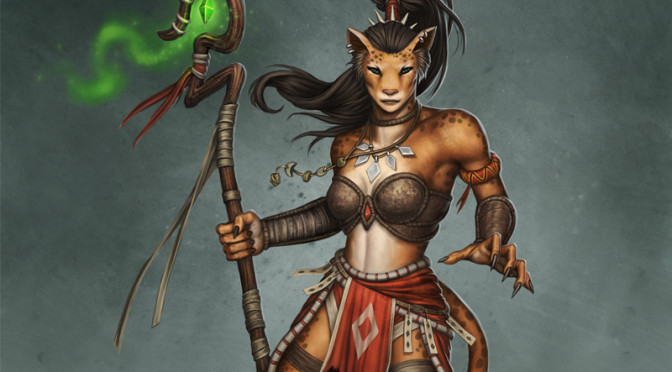 I’m bringing you one of my favorite pieces of art ever today.  When Paul and I began working on the races of Tellest, one of the ones that I was most looking forward to was the kaja.  Sure, there have been plenty of works of fantasy that have their own variations of feline races, but I’m very happy with mine, and Paul managed to take what I had in my head and put it to a digital piece of art that I will treasure forever. 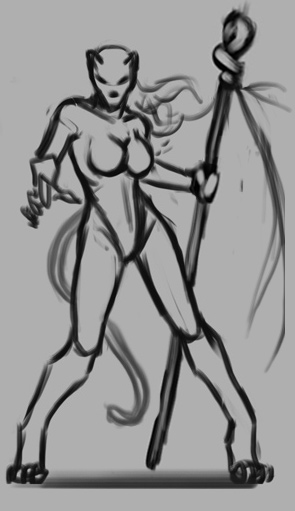 We really wanted to dial back from the very dynamic shots that had from some of our other characters, but we didn’t want her standing there waiting to enter combat after her male cohorts did all the ground work.  This pose gave her a little bit more of a flirting-with-danger, come hither look.

After that, Paul worked his magic, and we came up with a very good sketch of our final piece.  This kitty has claws, and she looked so expressive even at this stage of her creation. 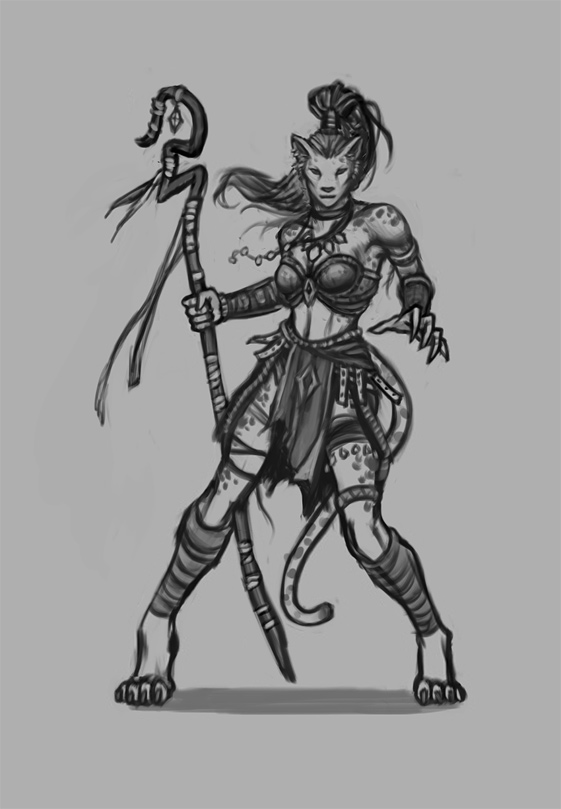 I have a lot of respect for Paul, and what he does.  When he creates these characters, he develops a backstory for them in his head.  He’s already come up with ideas for the goblin and the orc that he did, but with this character, I think I beat him to the punch.  This kaja is a dragonspeaker, a leader of her community that can actually commune with the great tyrants, and keeps a harmony between them.

Next up, Paul put together a nice color scheme for our savage dragonspeaker. 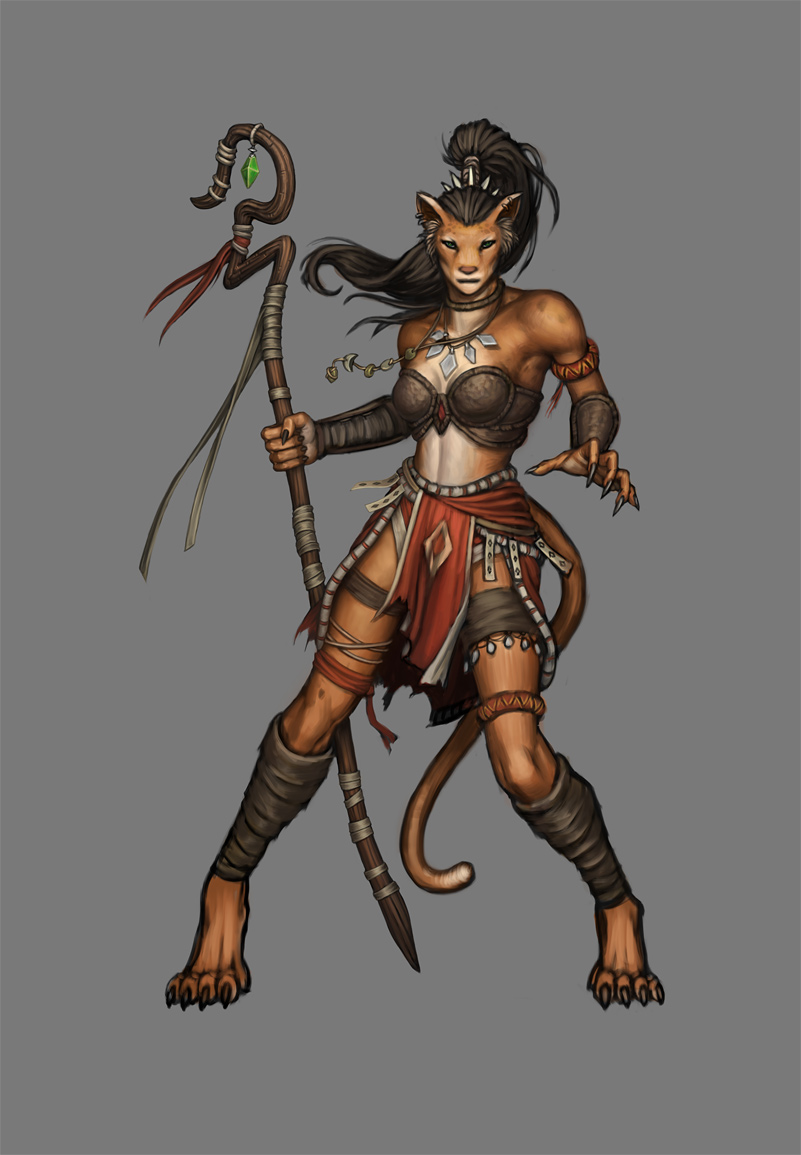 At this point, you can see just how well she’s coming along.  Her attire has more personality.  The minutiae of her physical features is expressive – Paul did a great freaking job with this.

I would have even considered this piece finished at this point, but he went and touched up our kaja even more. 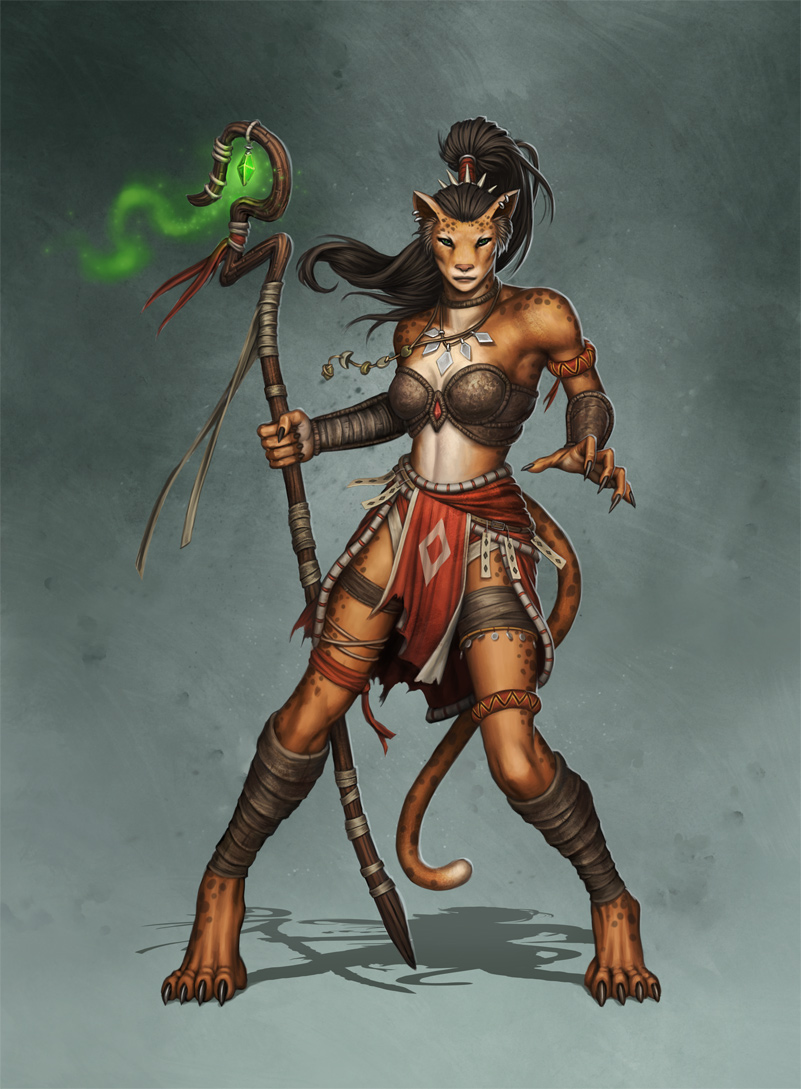 The dragonspeaker had more patterns to her fur and skin at this point.  Individual flecks and circles dotted her caramel colored body, and the gem in her staff is throwing off wisps of magic.

Rhianna and I even came up with a name for this champion, and that’s how we ended up with our very first story-less hero.

Kaiyonani was an awesome way for us to wrap up our art projects from 2014.  I’m so looking forward to working with Paul again throughout this year!

This incredible new champion has been inducted to the Tellest Art Gallery.  Check her out, along with the other finished pieces from Paul’s collection of commissions!