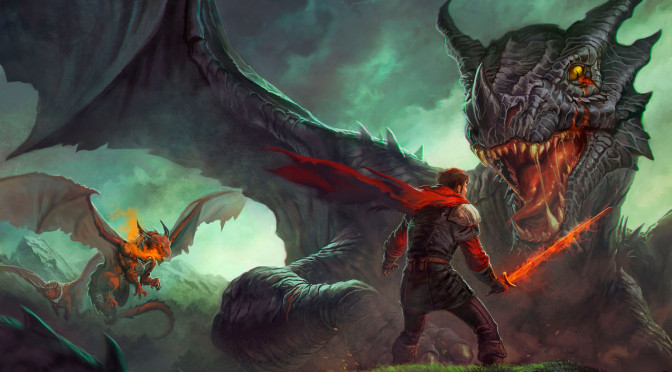 Good evening, fans of fantasy!  My schedule is all kinds of off as I prepare to pysch myself up for a lasik consultation tomorrow.

But fear not.  I’ve not forgotten about you.  Today’s art piece is a book cover.  Since we technically haven’t done a grand launch of it, it’s quietly slipped underneath the radar.  But As Darkness Falls was pretty impressive for Tellest when it first came out, and it would be foolish not to recognize it… for either its merits, or its badass new cover!

As we’re apt to do for our bigger books, we chose to do a double-wide with Leo at the helm.  It’s always so much more impressive, even though it is twice the cost.

The first thing we did was rule out the cover we “didn’t want.”

This was actually the cover I really wanted.  It was what I had always envisioned in my head when I considered the events of As Darkness Falls.  We had what we can assume is our evil dragon on the front, and then a dragon of ambiguous regard on the back.  It was exactly what I wanted!

That said, I was outvoted in this particular matter.  I really want to eventually get this piece finished, if for nothing more than my personal collection.  Instead, we moved toward an equally impressive piece of art that captured the mood a little better. 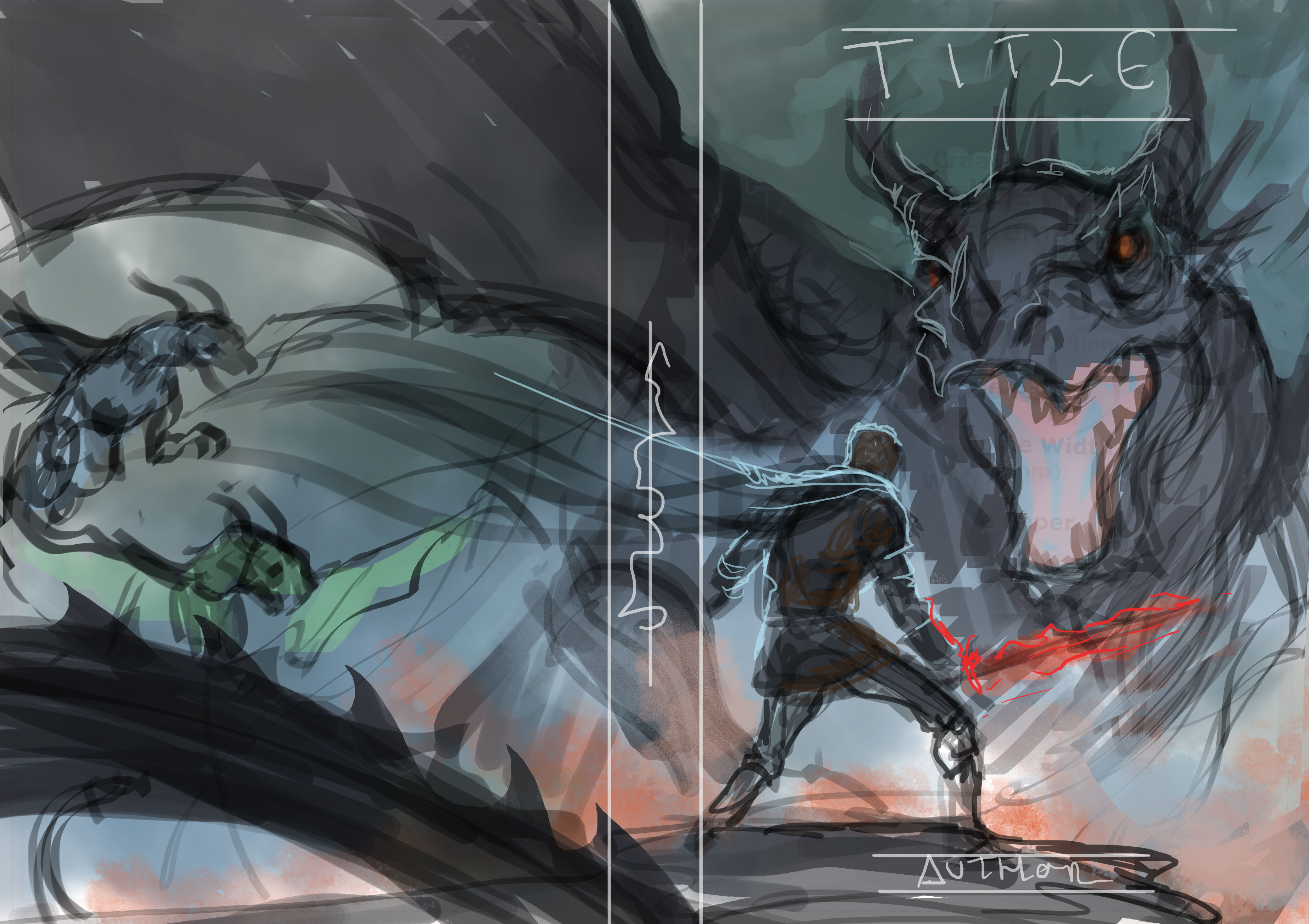 Now, what I really liked about this one is that it gave our antagonist some awesome cover real estate.  It also reminded me of one of my very favorite games, Shining Force.  Plus, we still get a good glimpse of Kaos in all his glory.  We also see two dragons on the back… so what does that all mean?  Well, you’ll not hear it from me unless you read the words I’ve written in the book!

The cover did experience some changes as we neared completion: 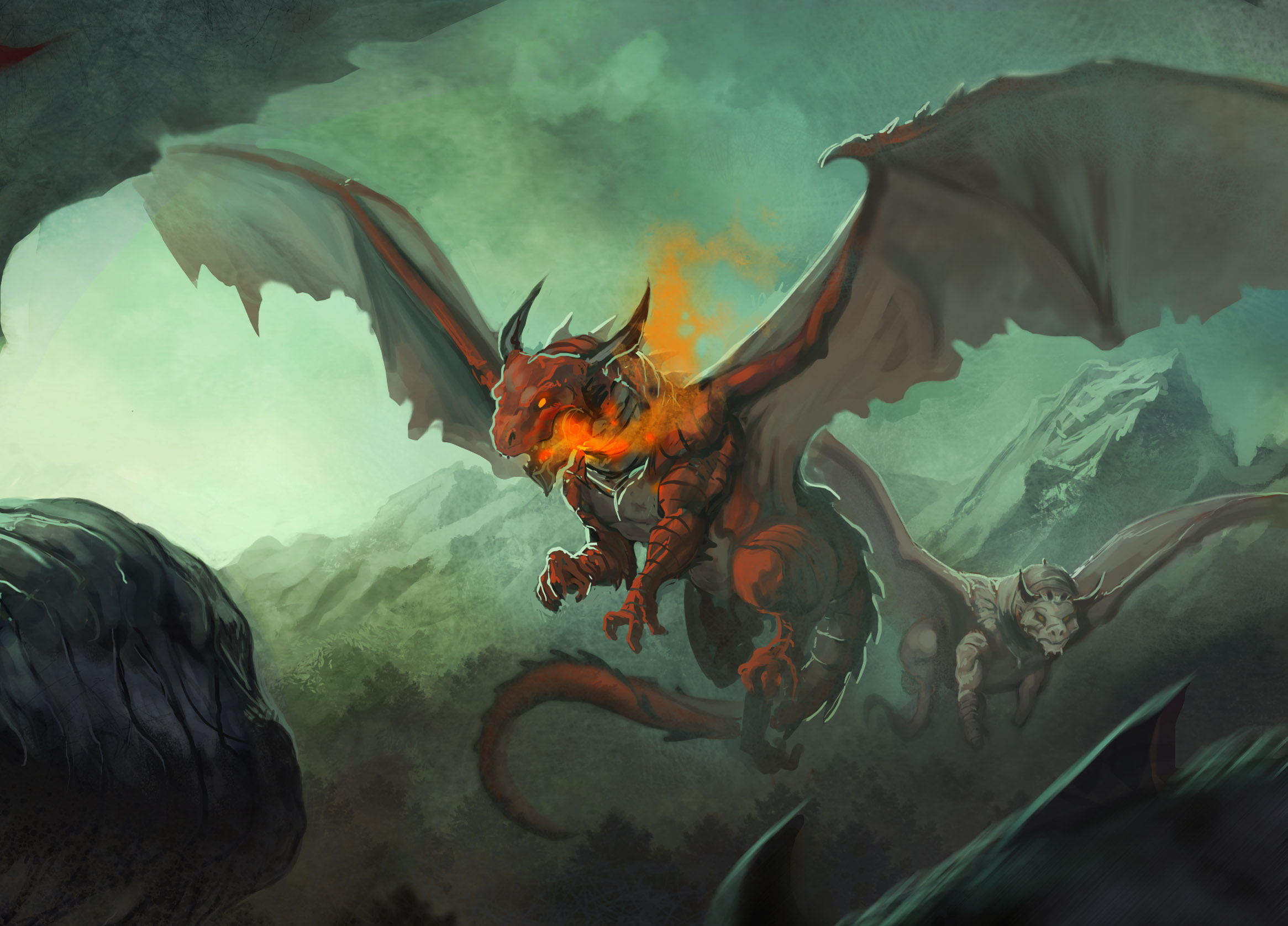 At one point, we experimented with the dragon in the background being a white dragon, but we decided to go against that because it blended into the background just a little too much. 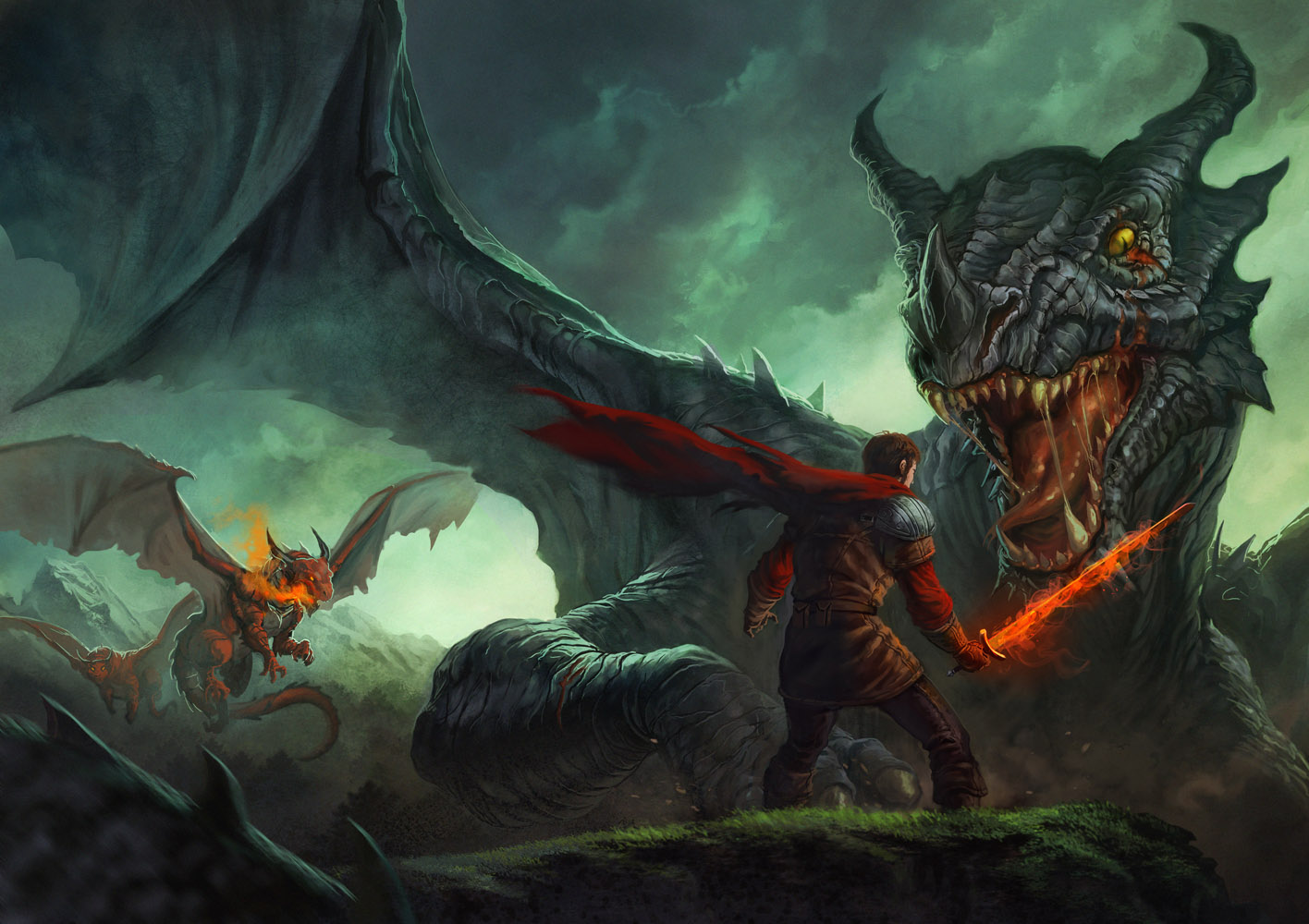 When Leo sent me this one, I was pretty sure that we were all set. But he did have some changes that he wanted to make… 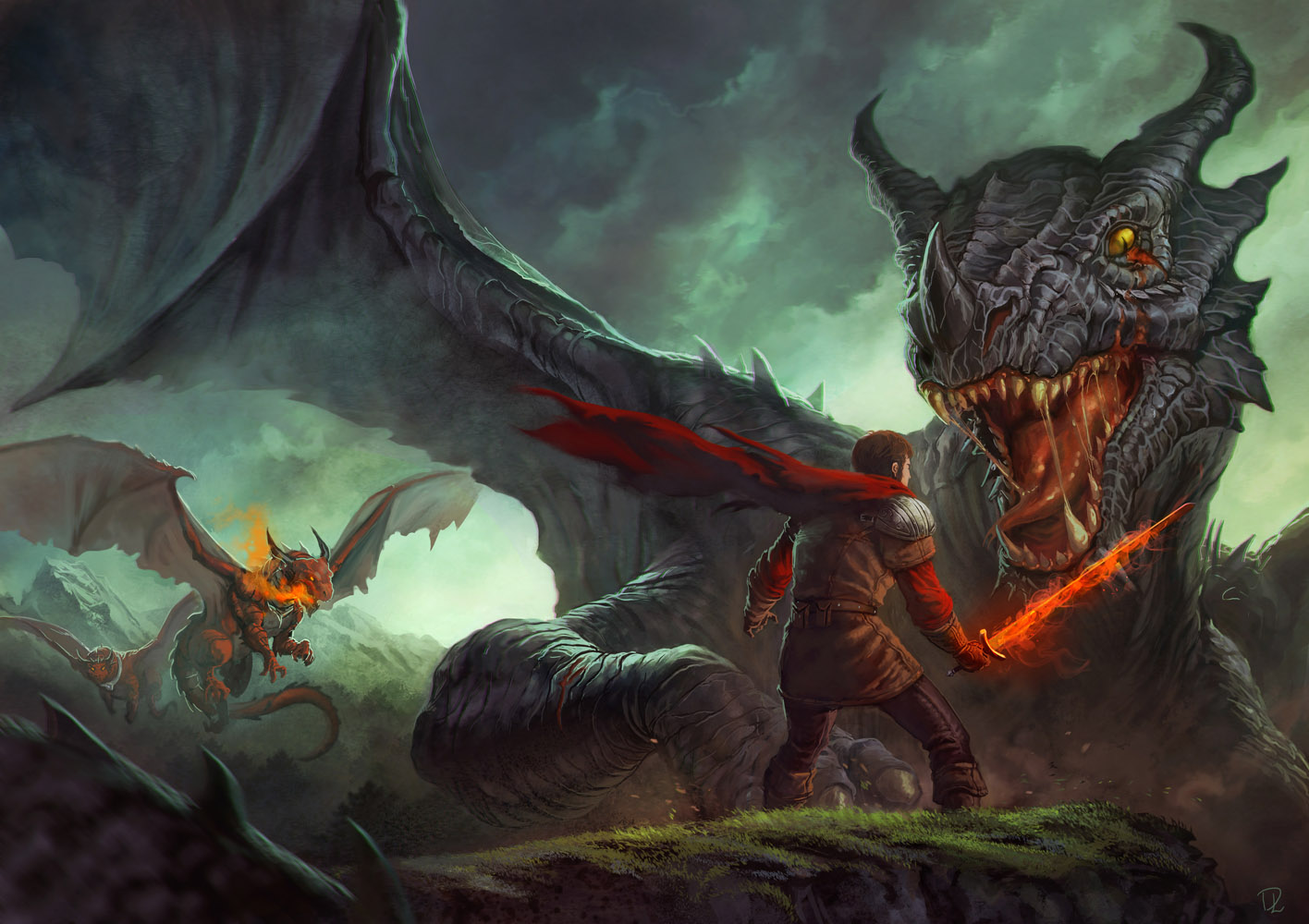 We altered a few things here, namely the lighting of the piece, which directly affected the ground and the dragon’s face and wing.  We also brought up Kaos’ head so that he was looking his foe more directly in his scary maw.  And in the background, you can see that a collar/necklace was added to one of the dragons. 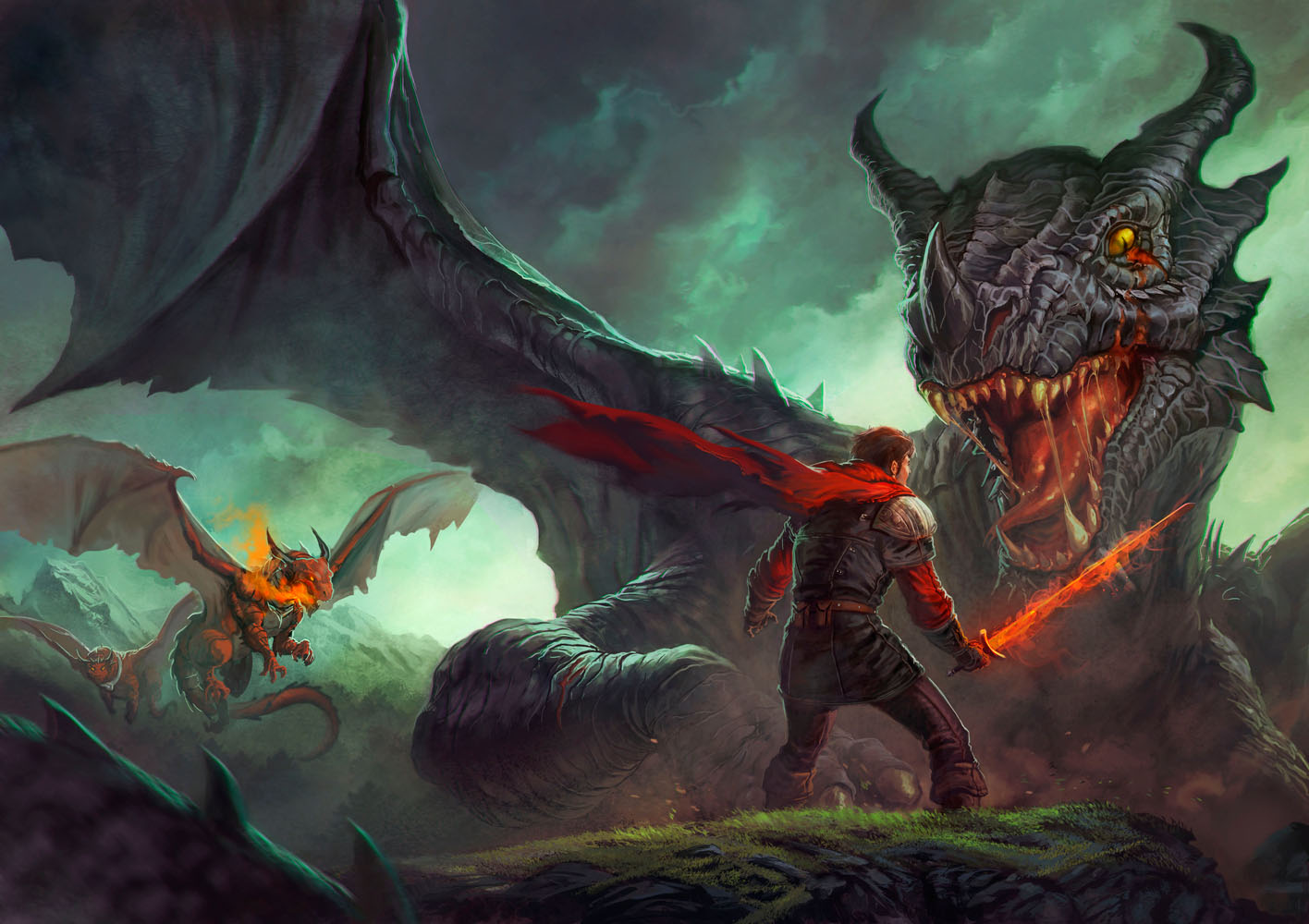 We finally had our completed piece.  This last bit required a few more changes.  We started by moving some of the smoke around so that the dragon’s wings weren’t as obscured, but the area just south of his face, where hot breaths would be, would be a little smokier. The ground changed as well, to blend in with the characters a bit more.  And last but not least, Kaos’ outfit and physical appearance changed somewhat.  It wasn’t too drastic, but it was enough to really appreciate.

And there you have it.  It was a lot of work, but Leo shined as always. Very impressed with his work, as I always am.  I hope you like this cover, and I hope you’re like me, and you’re ridiculously excited to see what he does with the final cover of the Child of the Stars Trilogy!