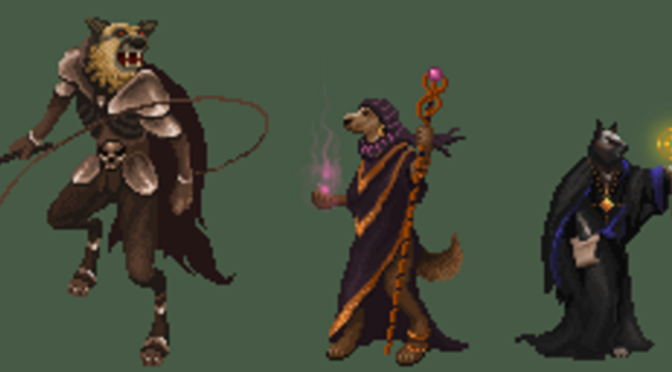 Hey there folks.  It’s been quite some time, but we return to you once again with a look at our upcoming, still somewhat mysterious card game.

We’ve already showed you the dwarves and the elves, both considered to be among the goodly races in not only Tellest but fantasy in general.  Today, we’re going to show you a dingier, less trusted race of the world.  Today, we’re showing you the gnolls.

How’s that for an assortment of different kinds of gnolls?  Just like the elves and dwarves, there’s not much that these five together besides their race.  It’s probably more apparent with them than with the others, because their attire and demeanor even seems different here and there.  So, what’s their deal? 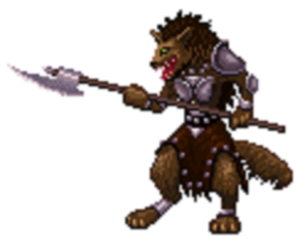 Our first gnoll—both in this list, and that we had designed—goes by the name of Wherricks.  Wherrics is kind of unique in that he’s been stuck in my mind palace for about two years now.  I’ve written a story that contains him, but it hasn’t seen anyone’s eyes but mine. What I can tell you about him is that, while he looks like the quintessential gnoll here, he’s done a fair share of working with other races as well. 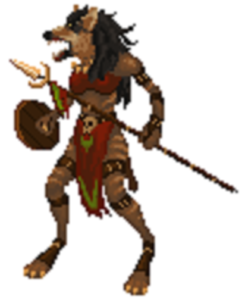 Rayas Vhirr is a gnoll with a more understandable look, I believe, than the rest of her comrades here.  She’s got a very tribal look, and that’s most likely because she comes from the deserts of Saveon. Hyenas inspired the gnolls, so why not? 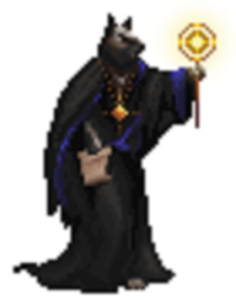 Perth, on the other hand, is a lot more of a reserved variation of her race.  A bit smaller and not exactly packing heat, she goes against what you’d think of when you think of a gnoll. She’s willing to sacrifice for her friends, even at the cost of her life. 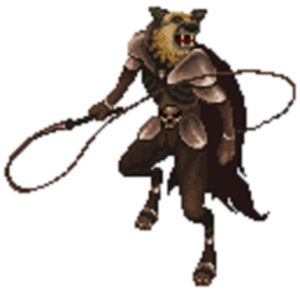 Here comes my favorite of the bunch.  Garreth Quarl is a bit of a treasure hunter—which already makes him jump up in my list.  Well… alright, maybe treasure hunter is too strong a word.  Perhaps crypt robber is more appropriate.  Either way, this is my guy.  You can also get a little bit of a Simon Belmont flavor from him, which I’m totally into. 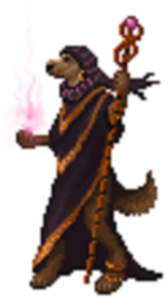 And here’s our last one for the gnolls.  Feneece Clawgaze, Poor thing looks emaciated, doesn’t she?  But you should know this.  Looks can be deceiving.  She is just about the opposite of the healer, Perth. Crossing her could be the worst thing you ever do.

And here you have the whole gang.  Just like with the others, you’d probably find some similarities with this group, but they aren’t exactly a tight-knit group.

Next time, we’ll bring you a friendly bunch… but we’re not telling you who just yet!