Greetings Otherworld travelers, and welcome to our second promotion of the week.  We’ve got a very cool look at a fantasy debut from an already strong author, and you’ll no doubt enjoy what is being delivered here.  Read on to learn more about Confrontation at Nuxvar.

Already an established science fiction writer, author Judith Moffitt turns her considerable skills toward fantasy, and her debut is no joke, even though it’s wildly entertaining.  Confrontation at Nuxvar, the first book in Moffitt’s Chronicles of Edrisia, knows exactly what it wants to be, and delivers just what fantasy lovers ought to love: dogs and dragons.  The author is clever with her writing, ensuring that across each chapter, there’s something enticing to bring you through to the next.  Moffitt also eschews some of the typical expectations of the fantasy genre, letting someone besides a teen just coming into their powers save the world.  It’s the author’s willingness to find new pathways that give Confrontation at Nuxvar a breath of fresh air that makes it so enjoyable. 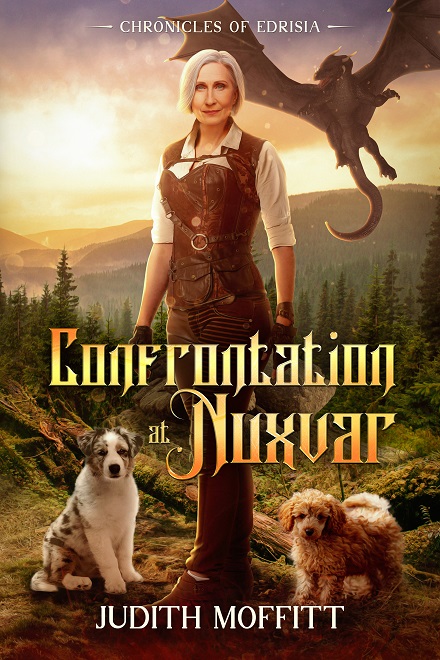 A war won, but at the cost of losing magic. Forty years later, the magic has returned, but the world has changed. A dark mage has risen who desires the subjugation of all. And there are no trained magic users left to fight him. Except one.

As a young woman, Janai was one of the few survivors of the mages who fought the last war. The others died within five years of the victory, unable to handle living in a world without magic. Now she’s old and tired, with all the aches and pains of age. The last thing she wants to do is save the world again. After all, it was a pretty miserable experience the last time.

But when the King calls for her help, she reluctantly responds because there is no one else. With the help of the King’s Guard and her three dogs, she sets off for Nuxvar and war. But the dogs are more than they seem and the King’s Guard has a traitor.

Come to Edrisia – a world of emerging magic, dragons bonded to riders, and a quest to save the world one more damn time.

Just like with her earlier sci-fi books, Moffitt’s latest doesn’t shy away from a lot of moving parts.  There is a vast and vibrant cast of characters that all work well together, and the events of the story bounce around at a nice pace, promising new surprises and sequences that will catch the attention of fantasy fans.  The story wraps things up nicely, but there’s still the potential of more from the world of Edrisia, and Moffitt has certainly shown that she can breathe powerful life into it.  For now though, it’s best to start at the beginning.  Check out Confrontation at Nuxvar on Amazon today!

One thought on “Fantasy Promo – Confrontation at Nuxvar”