Can you believe that we’re down to our penultimate set of sprite arts?  Mind you, that’s just for characters, but we’re getting ready to get moving with this card game.  It’s insane! We’ve been through humans, and dwarves and elves and gnolls and goblins…

We’re wrapping up with two more villainous races, and the first one up is the rhinotaur:

Now, it’s important to note that rhinotaurs are technically not so evil as some of the other races that they align with.  Among the so-called bad guys, only the gremlins and the lagano are more easy-going than the rhinotaurs.  It’s just that these poor saps are generally really dumb, and easy to manipulate.

Side note: did you know that we have a good and evil quotient that we use to determine whether or not a race in Tellest is predetermined to be willing to work with another race?  Now you know!

Lannis is as classic as you can get as far as the rhinotaurs go.  He comes from the more well-to do city of Theria, and is employed as a guard.  Typically, these fellows are very reserved and tend to stay by themselves in the wilderness.  If they dwell with others in a larger pack, it usually numbers in an area less than a dozen.  Lannis, meanwhile, hangs out in a city with thousands of other rhinotaurs. 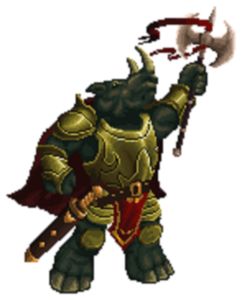 Noth happens to be one of those other rhinotaurs from the city of Theria.  He works in service to Cerox, the god of thunder among his people.  As a paladin in the order, he is meant to uphold the values of his people and the will of his deity.  So, when the whispers of Cerox told him to travel to the mysterious dungeon, he knew it was time to take up his axe and sword and go prove his faith. 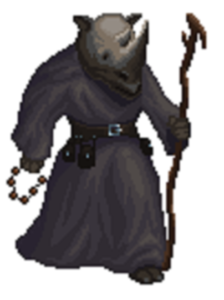 Raia is our first rhinotaur from another locale.  Whereas Theria is a bustling city, Jecraskia is a more reserved landmark, meant for pilgrims and faith militant.  Those who travel there don’t often stay long, but Raia, an aspiring mage, finds her way back there from time to time.  She is good-hearted, and filled with wisdom, despite the limitations of her people. 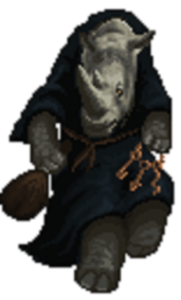 Our final rhinotaur adventurer is Wrexa.  You’ve heard of a bull in a china shop, right?  Can you imagine a rhino in one?  In all honesty, Wrexa is a fairly competent thief.  When the going gets tough, though, she finds herself causing more trouble than she solves.  She’s not from either of the aforementioned places as the other rhinotaurs.  She comes from the slummier city of Ceros.

That about wraps up our look at the rhinotaur of Tellest and our mystery card game.  We’ve got one last set of adventure sprites coming your way soon, so keep an eye out!