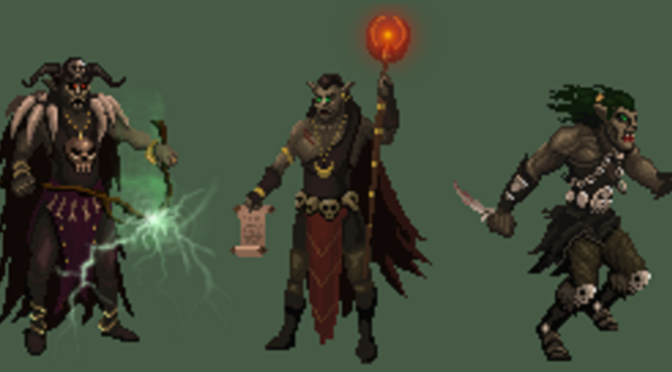 Hey there everyone!  We’re back once again to show off some of our upcoming game.  Drawing back the curtain bit by bit is hopefully getting you excited for a more expansive reveal later on.

We’ve shown you a wide assortment of characters already, and now we’re ready to show you another race of characters.  Elves and dwarves, gnomes and gnolls, it’s time to move aside.  Make way for the goblins!

You’ll notice right off the bat that we’ve only got three of these adventurers, similar to the dwarves, who were also underrepresented.  Such is life… it was all randomized—that’s the lot they drew!

So what are the stories for these three brave souls?

First up, we have Breggin Toll.  Handsome guy, right?  Well, Breggin is a fierce goblin cleric who has set out to cleanse the dungeon that’s appeared.  He knows that something is amiss, and he’s willing to stake all his worth on finding out what that is.  Here’s an interesting side note, for if you’re new to Tellest.  Our goblins aren’t like the little guys you’ll see in most fantasy.  They’re vicious and deadly.  If you’re a fan of the old look though, sit tight, the gremlins have taken up that spot and are going to be our next featured race!

Darris Urza is a loner if there ever was one.  Even with those of his kind, this goblin shaman believes that they only hold him back.  He believes he’s stronger by himself, and as such, he never depends on anyone else. 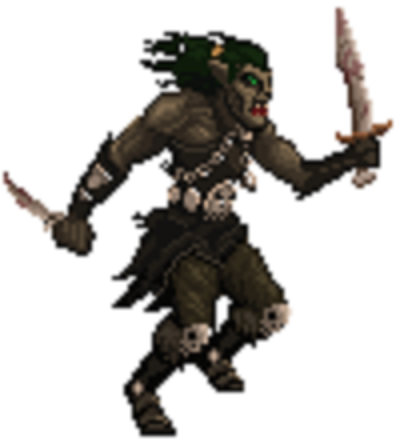 Finally, we have Jass Gore.  This warrior/thief hybrid was inspired by Paul Davies’ concept art of the goblins, and we are incredibly satisfied by the way this turned out.  Jass is the face of the goblins, so to speak, and he’s definitely a strong candidate for a memorable champion.  Fleet of foot and deadly with a blade, Jass is one fellow you wouldn’t want to meet in a dark alley or dungeon corridor.

And there you have it.  Here’s your first look at the vicious goblins, just one more race that’s going to feature in our game.  Stay tuned… in a couple of weeks, we’ll show off those gremlins!

One thought on “Sprite Arts – Goblins”