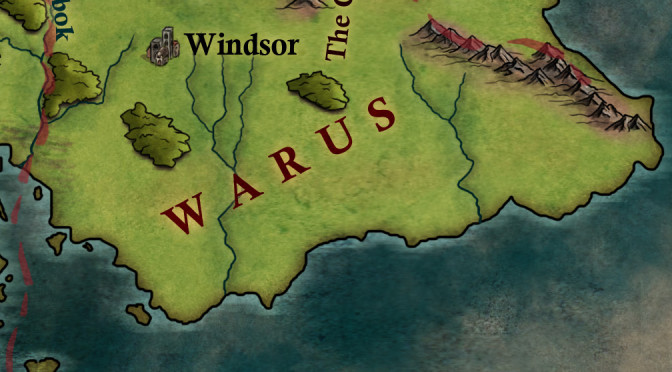 Warus is not bordered by natural landmarks on any side but its south, where the ocean lies.  It’s border is determined by the towns and the outposts of it and its adjoining neighbors, Raleigh and Daltain.

The country primarily consists of plains and forests, and some mountains.  In the southern portion of the country, adjacent to the ocean, there is a large swamp.  Some mountainous terrain borders the swamp on its southeast side, where a myriad of caves are located.

Warus is one of the countries on Draconis that is very absent of human life.  Instead, it is inhabited mostly by anthropomorphic races.  It is assumed that the Kobolds have been there the longest, followed by the Gnolls.  The Kaja are a primarily nomadic race, that can be found spread throughout the country.

It is rumored that the swamp in the south of Warus is populated by Lagano, but if they do live there, they have found a way to maintain a much hidden presence.  Villages haven’t been found, but some skeletons indicate that they are fond of the area. 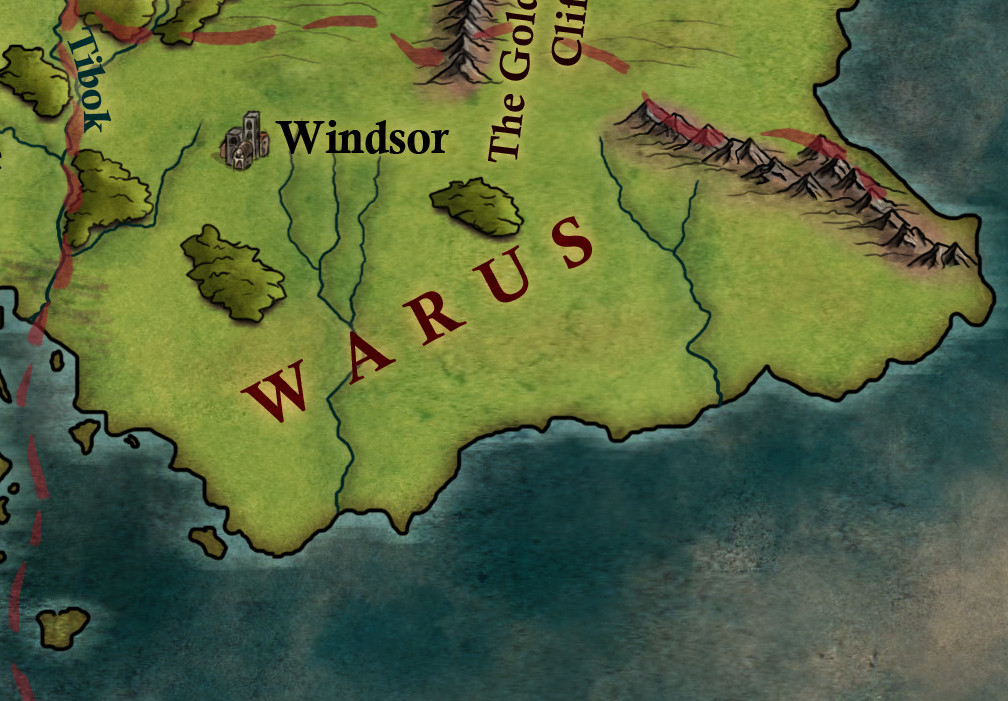 At the earliest times for Warus, the country was rather inhospitable.  The ecology didn’t allow for convenient farming, and hunting was equally difficult.  Humans were once a part of the racial structure, but because of some adversarial conflict with Gnolls and Trolls, which also used to be a part of the populace, they were driven out, to the north and west.

Once the humans were gone, the Kaja and the Kobolds had a freer reign of the terrain.  However, the trolls were still an issue.  The anthropomorphic races banded together, and cast the trolls into deep caves or into the sea.

There was a brief time when the three anthropomorphic races lived in a stable harmony.  The Gnolls typically stayed in the wastelands that bordered the swamp, while the Kobolds began to inhabit the northlands.  The Kaja, meanwhile, continued their nomadic lifestyle, cycling around the country in multiple packs.

Eventually, the greed and tenacity of the Gnolls led them to attack the Kaja.  Their typically passive nature led to their violent displacement from the lower plains of the country.  The Gnolls continue to advance north.

Because of the constant battling between the Gnolls and the Kaja, the Kobolds were left alone.  They were initially able to develop sprawling cities, outposts and castles along the northern and western borders.  Their lifestyle is an emulation of the major cities of the neighboring countries.

The Kobolds live in a fairly feudal society.  A good deal of respect is given to class, religion and breed.  They are also more technologically sound because of their absence in the earlier conflicts of the other races.

While the Gnolls and Kobolds established strong footholds in the country, the Kaja were forced to scrounge for their livelihood.  Because of this weakness, the Gnolls begin hunting the Kaja for sport.

Unfortunately, because of the skittish nature that is instilled in the Kaja, the Kobolds become a target in the wild if they are alone.  To a Kaja, the Gnolls and Kobolds are one in the same.