Howdy folks.  It’s a new week, and a new set of stops in the Otherworld is nearly upon us.  Today is our first stop, and we take a peek at our own world in all its darkness and its shadows.  It’s here that we see the world that’s been created for No Peace in Death, Book of the Immortals: Volume I.

JD Penley set out to make a book about vampires that eschews the typical constructs of their stories.  There is less identifying as a monster, or whining about what they are, and more chasing of mysteries and using the powers given to them in interesting ways.  Penley manages to make No Peace in Death, the first volume in his Book of the Immortals series, a thrilling escape into a version of our world that we don’t often see.  Penley also succeeds in crafting a vampire with incredible depth, and he brings his readers on an intriguing journey with him. 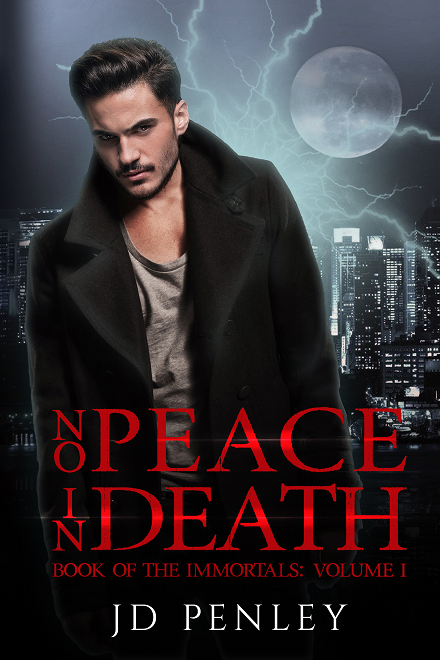 It can be both a blessing and a curse.

Lucas was born into a life most could only dream of only to have everything ripped away. Broken and in despair, unable to cope with spending eternity alone, he does the unthinkable—he takes his life. Only instead of the death he craves, he is transformed into a creature of myth and legend.

In his new reality, Lucas begins to travel the world in search of peace only to find none awaits him. Until another kindred soul crosses his path—a child alone in the world just like him.

Confronted with the impossibility before him, Lucas ponders the journey he chose and sets out into the unknown, hoping to quiet the whispers in his mind and give the child the one thing he has been denied for centuries: love.

But Lucas soon finds himself confronting a past he thought was lost, and quickly learns that not all secrets stay buried. Now, he must face demons that could destroy him and the child he wants so desperately to protect.

If readers are looking for a vampire-starring urban fantasy that delivers on both the origins of their vampirism, and the odyssey that has brought them to the present day, they need look no further than Penley’s story.  The author has crafted a catching new vampire legend which won’t soon be forgotten by its fans.  And with two follow-ups in the wings, there’s no better time than now to dive in.  Check out No Peace in Death, Book of the Immortal: Volume I on Amazon today!