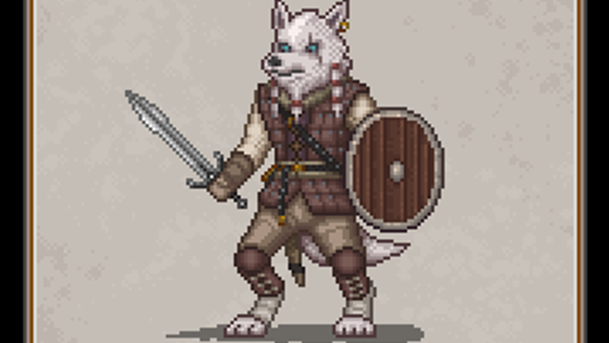 Howdy!  So, not as long a wait between this awesome sprite and our last one.  Serathus routinely delivers awesome work, and this time we get to show off something really cool.  It’s been a while since we had Dirk art to show off, and I would have never thought we would have had the sprite art for him done before a proper revamp of his character, but here we are!  Now you know the third member of the nine who is part of this project.  It’ll be Luca, David and Dirk traveling together, though I can assure they’ll meet up with other allies along the way.  Before we step to far from that though, let’s focus a bit more on our current character. 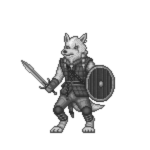 Dirk now fully embraces his lycanthropy, doing less to hide it this far into the timeline, as the people of Atalatha, with whom he is closely aligned, have become more tolerable and respectful of other races and magical beings.  Heck, at this point in the timeline, gnolls are walking around the city in broad daylight!  Dirk is still very close with Luca, and it’s not unheard of for the werewolf to follow his ward wherever he goes. 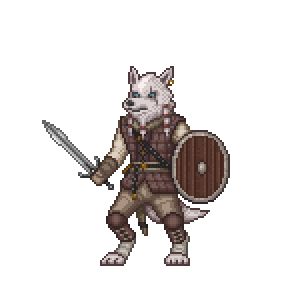 Dirk is the eldest of the three main characters, and he has years of training and wisdom behind him.  While Luca has treasures and David has his immense size, Dirk is agile and knows his strategies, so he rounds out the group nicely.  Of course, I’m still playing with the cards close to my chest regarding the story.  Speaking of cards… 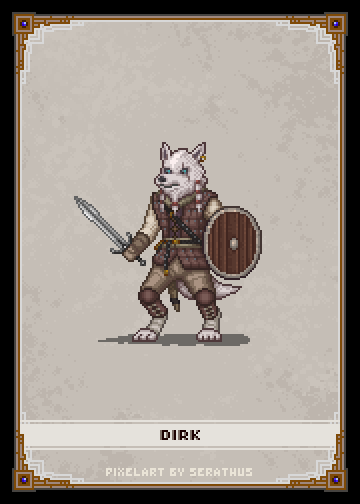 Here we have the card version of Dirk.  Still not sure what they do, I’ve got to tell ya.  But I’m sure I could think of a way to incorporate them into the project in some interesting ways.

In keeping up with the normal timeline, I’ve got the next pixel art character—yes there’s more—coming down the pipeline in just three weeks.  There’s still more to show off about this little project, so remember to check back here from time to time!