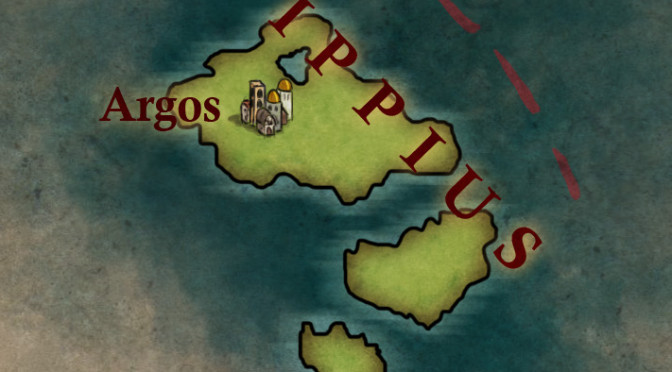 Ippius was named after a courageous warrior in a fairytale told by the inhabitants of the country.  His name was Arthur Ipparius.  The three main islands in the Ippius archipelago are all named after characters in the fairytale.

The largest island of the Ippius archipelago is called Arthica, named after the hero of the Ipparius fairytale.  The largest human establishment of the island, Argos, is also named after Arthur, and is considered the country’s capital.

The second largest island is named after Princess Iona from the fairytale, who is portrayed as Arthur’s love interest.

The smallest of the main islands is called Norkoth, after an evil warrior who tried to slay Arthur and all those he loved.  Norkoth banded together a primitive group of lagano, and led them into battle against Arthur and his soldiers.

All of the lands within Ippius are islands, but many of the islands seem to have personalities of their own, due to the wide variety of geographic differences.  Arthica is generally a mild island, with many forests, mountains and plains.  Norkoth is a jungle infested land mass, with only a few beaches, mountains, and a large volcano offering some diversity.  Iona is a mix of the other two islands.  A large jungle sits in the middle of the island, but plains and forests encroach upon it.

Humans are the predominant race within Ippius, and many of them are cold to other races.  However, many of the smaller islands are inhabited by other races.  Even the third largest island is overrun with lagano.

Besides the humans and lizardmen of the country, the kaja have found homes among several islands in the archipelago.

A tribe of orcs also shares Iona with a civilization of jungle dwelling humans.  These two races coexist rather peacefully, however orcs are only very rarely permitted to visit Arthica.

Groups of murkgill also have villages within the waters surrounding the islands of Ippius.  They typically leave the other races alone, but sailors have been mentioning that they believe the numbers of the underwater dwellers are growing at a rapid race, and will soon overwhelm even the humans. 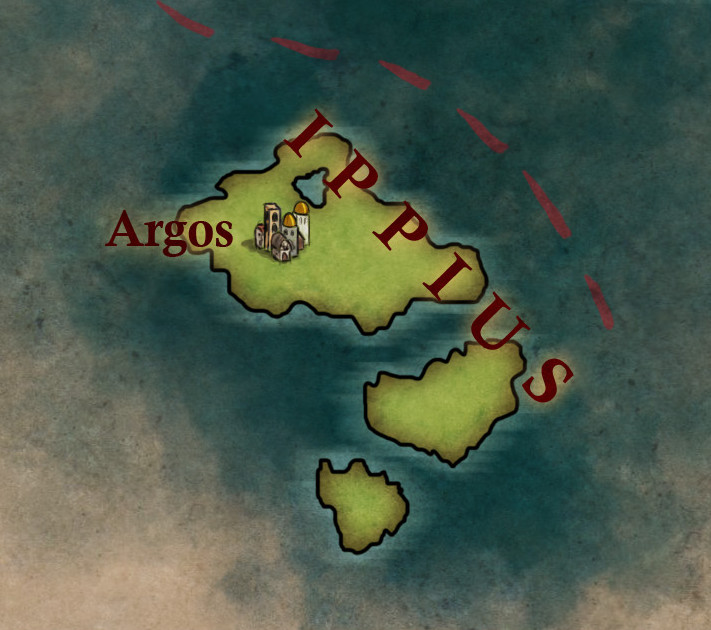 Ippius began as an uninhabited set of islands, but as time progressed, several races found their way to the isles.

Murkgills and mermen were the first to inhabit the area around the islands, and some of the murkgills had even taken to land.  As lizardmen found their way to Ippius, however, the murkgills withdrew to the lakes, and mermen withdrew to the ocean, preferring to dwell beneath the water instead of sharing the lands with the air breathers.  Kaja were the next to settle among the islands, stalking quietly out of sight of the lizardmen.  Humans arrived soon after, in larger numbers than any of the other races.  Finally, after the loss of their homeland Minoa, minotaurs began to settle within Ippius as well.

After the refugees from Minoa arrived in Ippius, the humans began to grow tired of sharing their lands with the other races.  They began driving out the lizardmen, kaja and minotaurs.

The lizardmen hardly inhabited present-day Arthica, and went without much pressure toward the island now known as Norkoth.  The kaja, too, disbanded easily, electing to avoid unwanted attention from the humans.

The minotaurs were not so easily pushed from Arthica.  A series of violent, bloody battles unfolded throughout Arthica, and even when the minotaurs fled to Iona, the humans followed, driving them out of Ippius altogether.

At the same time the humans were claiming dominance over the land of Ippius, the murkgills had decided that the ocean surrounding Ippius belonged to them and them alone.  They began hunting the mermen around the islands, and drove them out, becoming the supreme underwater race of Ippius.

After the culling of races, both the humans and lizardmen grew in tremendous numbers.  Arthica became greatly colonized, and Norkoth was teeming with lizardmen, almost to the point where they were overpopulated.

It was during this period that the Ipparius fairytale began, and was rooted in actual fact.  The lizardmen from Norkoth attacked Arthica, in an effort to punish the humans who had violently drove them out of the country.

Though the lizardmen were unsuccessful in their attempts to regain all of Ippius, the human settlements were badly damaged, and even Argos suffered because of Norkoth’s raid.

Ippius is once again free of racial oppression, the lizardmen and humans staying on their own islands.  However, Arthica once again fell into darkness over the past several years, when the entire royal family line, the Dactyls, was wrought from existence.

Some say that there is a distant relative of the Dactyls still left breathing, but none can find him, and many have worked to discredit that rumor.

In the place of the Dactyls, a retainer for the throne was named.  Arik Purdell, a military advisor to the late King Jason Dactyls, is currently governing over Argos, and most of Arthica.