We have been raring to go, taking trips back and forth from the Otherworld this month, and today it seems will be no different. In the past couple of weeks, we’ve done some high fantasy, and some contemporary fantasy, but why not look at a dark future now?

The Night Skies Over Valhallow world is Dan Osarchuk’s take on dystopian fantasy.  He’s been at it for a long while, turning Earth into something darker that echoes the ages long past.  Red Noon at Helltowne is his latest fare, and you can see just from the first few pages how robust the world is.  A mix of fantasy, humor, action and political intrigue, the works of Osarchuk also serve an allegorical purpose.  More than once there’s a few stabs taken at the world we currently live in. 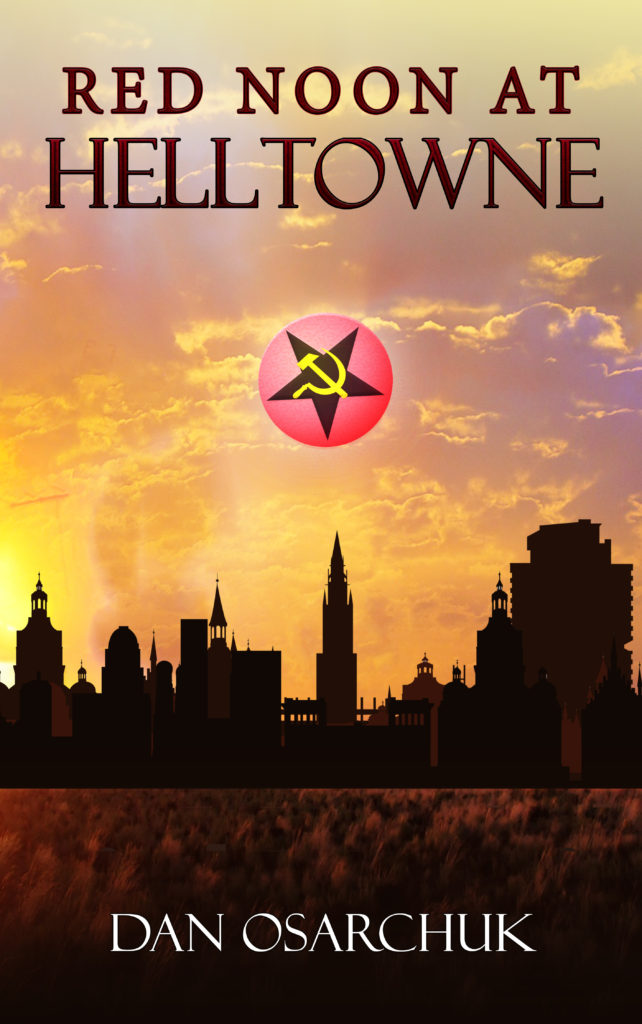 On the road to revenge, Oborren and his eccentric allies must face not only the terrifying supernatural threats of Helltowne, but also the insidious philosophy pushed by that accursed land’s red dwarf masters: Equalitarianism. Devils and darkness; red flags and tyranny abound, and it is up to the brave adventurers to stop Commissar General Noel and his machinations to ‘Abolish Humanness’, including his scheme to unleash a mighty weapon of the Ancients upon them all!

But the vile plans of the red dwarves are not contained to Helltowne. Elfriede, the savages of Fjord Vallee, and others must work to free the land of Dinglesfuhr from the bizarre Glowing Spectral Personhood cult. Thanks to such supporters of Underreign, including the former leader of that land, Mekla, goblins were even invited into Dinglesfuhr! Now they have devastated it and subjected its inhabitants to a life of oppression, terror, and death.

Set in the Night Skies Over Valhallow world of the fantasy future, Red Noon at Helltowne is the first book in the new Vale War trilogy. A map and comprehensive glossary are included for those new to this setting, so that they can immediately begin enjoying this amazing work.

Red Noon at Helltowne: a must-read for fans of dark fantasy, action, humor, as well as saving the world from the lies and calamities of Equalitarianism.

It’s never too late to jump on board and see what makes Osarchuk’s world so deep and rich.  While you can head over to the author’s website to see what he’s been up to,  now is the best time to pick up Red Noon at Helltowne from Amazon.  It’s on sale for just 99 cents! You’ll see right away why Osarchuk keeps plugging away at these books.