Greetings Otherworld travelers, and welcome to a new week.  We’re actually returning to the worlds of one of the authors we featured here earlier this year, although we’re scoping out a new world among the ones he’s built.  If you’re looking for a fun, explorative urban fantasy, read on to learn more about The Magical Train.

If there’s one thing to be said about author Aaron Alberto, it is that he writes at a frenetic pace.  When we last saw his work, we were looking at his latest, but since then he’s released another pair of books.  Today, we’re looking at the oldest of his tales, called The Magical Train.  It’s the one that’s the most beloved as well.  That might be because it’s Alberto’s first brush with the expansiveness of his imagination, or because of the idea behind it: the thrill of exploring a world.  And in that case, the hero of the story has an opportunity to do more than most, when he is introduced to a brand new one.  Throughout it all, Alberto writes with a poetic flair, painting words with abstract colors and feelings of the heart. 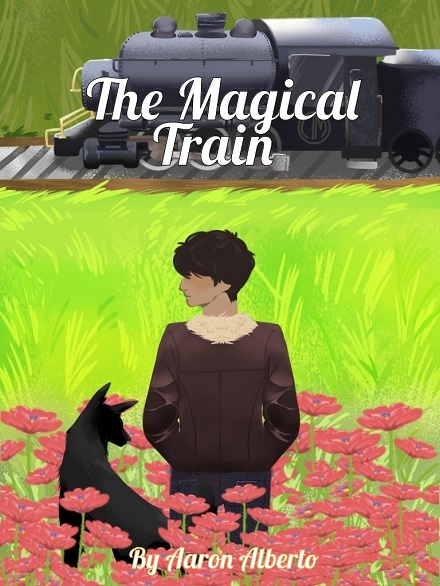 Join Lautaro Vacas, a pilot who ends up in a mysterious new world after being sucked in by The Bermuda Triangle while flying on his plane. There, he encounters a train conductor named, Emerson, who takes him on her life dealings. This leads to their paths being intertwined for the rest of the story when after going to a rock concert protest against the kingdom, they are ambushed into remaining together along with some other new-made friends. The pilot however needs to get back home and his plane is being held by the King’s knight army.

Apparently, the pilot is in a kingdom called “Alnidor” within a magical world that is unlike anything of ours. This world is eternal, and boundless but perilous and there appears to be a vague difference among its people between those who have developed high cognition and intuitive skills and those who have not. As the pilot goes on a train journey with his new friends to the kingdom’s castle to get his plane back, he learns about Alnidor’s culture, history and societal ways, all leading him to an encounter with an alluring, vile twist!

Between compelling characters and a lovely and expressive world that’s worth exploring, the author’s first book remains a highlight among his storytelling credentials.  There’s plenty to enjoy here, from the quirky way the characters interact, to the mysteries and twists building in the background.  It’s the kind of story that is great as an escape for an adult, or a children’s story.  Alberto is working on a deeper dive into the same world that The Magical Train takes place in, so it makes sense to dive into the story he’s already introduced.  Check out The Magical Train (Aarthscape Book 1) on Amazon today!