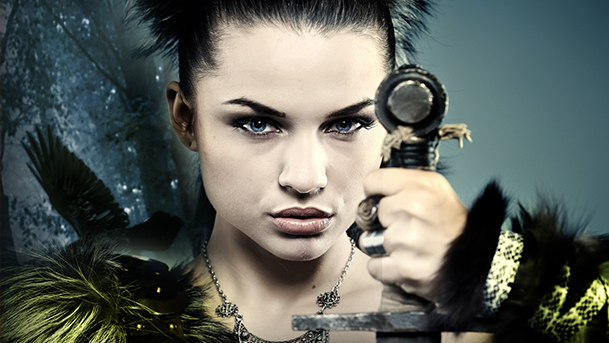 Howdy folks.  I told you it was going to be a busy week for fantasy, and I wasn’t kidding.  We had more urban/contemporary fare earlier in the week, but today we’re going to be looking at an awesome new debut from an up-and-coming author.  Read on to find out more about Make it Out Alive.

Emma Ellis writes stories that appeal to fans of romance who also want a bit of light fantasy added in for flavor.  Her new book, Make it Out Alive, delivers all that and more.  At its heart, the story tackles complicated elements of character development.  Survival, greed, redemption and love are all on display here, and Ellis does a fantastic job of tying it all together in a satisfying package.  The heroes are ones you love to root for as well.  Violet and Ryland will stick with you long after the final page.

Make It Out Alive tells the story of Violet, a young girl living in a fantasy world who has been forced through circumstances out of her control, to live by stealing essential food and goods just to ensure that she and her witch grandmother survive from day to day.

But living this way was always bound to catch up with her, and now, as refugees living in the forest on the outskirts of the kingdom, Violet’s enforced misdemeanors are about to bring her whole world crashing down around her.

The King has had enough of her lawless ways and sends Ryland, a skilled and fearless bounty hunter, to track Violet down and return her to the kingdom where she will face execution. But when Ryland and Violet become lost in the forest, their own survival becomes their only goal. As each realizes that they must rely on the other to get out of the forest alive, they begin to grow closer as an unexpected bond forms between them.

What perils will they face as they seek a way out? Is anywhere safe? Will they ever reach a place of safety? And what of the relationship they have formed? Will Violet still be led to her death for the sake of a bag of money?

Ellis excels at putting together material that shines a light on some of the harder times people can suffer through—but that same light overpowers as well, eventually winning out against the darkness.  She shows the flaws we all have, but the capacity to be greater.  If you like your stories to have a few touches of greys, with a message of hope and betterment, you’ll find a great one here.  There’s never been a better time to cuddle up to a good book, and Ellis’s is a great one to add to your list.  Check out Make it Out Alive on Amazon today!