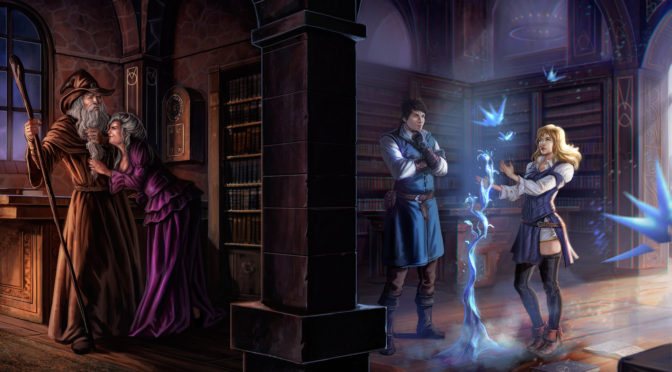 “I’ll try,” Adelia said.  After an uncomfortable elongated silence, the girl turned to her new tutor.  “How do I start?”

“Of course,” Lucinda said, placing her hand to her head.  “It isn’t second nature to you.  I should have been more aware.  Adelia, when you look at me, you can see the purple of my dress.  With magic, you can reach into an item like it is a river.  And in that river, you can feel the purple, the same way you’d feel its texture.  Before your hand leaves that river, you can move it about until the color changes.  Reach into the flower, Miss Kreegan.  Feel its properties.  Change them as you will.”

The pupil narrowed her eyes, and focused on the closest flower.  She stared at it for some time, as though she would see the river that Lucinda spoke of.  Just as she was about to concede, she felt a response from the flora, as though it knew it was being meddled with.  It was as if a door had opened, and Adelia was invited in.  Beside her, the plump sorceress watched as the apprentice scanned every aspect of the flower.  Adelia felt its texture from within: its moistures, its age, its scent.  And then, she felt its color.  It was warm and bold, and it sat with pride above the other properties.  Still, it quivered when the girl’s hand drew in around it.  Try as she did though, she couldn’t change that element.

“Well of course it doesn’t want to be changed.  It’s a red flower.  That’s what it’s always been, and that’s what it endeavors to be.  But you have to want it to change more.  Use some of that impressive will I felt earlier.  Tell it that it will change back, if you have to.”

Diving back into that open door, Adelia found the color once again, and placed her hand upon it.  When it was not so apprehensive, the girl invited her magic upon it.

Her eyes widened at the sight of the bright crimson turning into a muted blue.  But her brow furled as she felt it change from within.

“Excellent work,” Lucinda praised.  “Perhaps Gaston did right by taking you under his wing.”

Adelia felt gratified in that moment.  The sorceress had offered that encouragement without bemusement, and she seemed distant from her usual risqué train of thought.  But she did remain focused on the girl, which had Adelia cocking her head.  “What?”

The pupil felt her brow still furrowed then, and bowed her head.  “It didn’t want to change, and when I forced it so, I could feel its pain.”

Lucinda nodded.  “You changed it from its innermost being.  Without the skill or experience to know how to ease that transition, it will always sting a little.  In time, you’ll find you can erase that pain and discomfort the same way you can change its color.  And in any case, it will eventually return to form as good as new.”

“But that’s not always the case, is it?” Adelia asked.  “I mean, if you turned a man into a mouse and a cat ate him…”

“If he was whole, the mouse might survive, but the cat would certainly not.  Think of it this way.  You could change the color of a rose, and pluck it from the ground.  While the color may revert back, the flower will never again be one with its stem.

“Let’s do away with all of this dreadful talk of death and dismemberment, shall we?” she went on.  “After all, we’re here to show you how interesting and useful and entertaining this power is.  Now, you wouldn’t be able to turn this flower into gold right now, because you don’t understand the properties of gold.  Every item, every creature, every person has a unique composition, and you’ll need experiences with each of them before you can change something to reflect what you know.  Now, you have me here, so you’ve got the benefit of someone who has seen it all.  Use the flower as the canvas, and my experience as the brush.  Go on dear girl.  Think of anything you’d like.”

Adelia stared at that flower then, and thought about what her teacher said.  “Can you turn it into gold?”

“Starting simple, then, are we?”  Lucinda snapped her fingers, and between the pupil’s blinks, the blue and green had been encased in gold.  “Pick something a little more challenging.  Flex your imagination.”

Nodding, Adelia cast her gaze about the gardens.  She spotted a butterfly that flittered about the flowers then—perhaps the same one that Merlin intended to hunt that morning.  “That butterfly there,” she pointed.  “Can you change it so that it becomes a dragon, but it remains the same size?”

“Oh!” Lucinda exclaimed with pride.  “Delightful.  Now remember: what will be will always be.  It may look like a dragon, but it’s still a butterfly at heart.”

A little puff of smoke encompassed the butterfly, and when it cleared, a dragon was in its place.  Adelia couldn’t hide her smile, especially as the confused creature came close.  “So, I don’t expect it to breathe fire, but could it?”

“In theory,” Lucinda said.  “It has the necessary anatomy to do so, but being that it’s never had those organs before, it wouldn’t know how to use them.  Consider this: if I was to transform you so that you had wings, you couldn’t fly—at least, not right away.  You had to learn how your legs worked, and it would be the same for wings.”

“And your squirrel… when you turned him into a human, I’m guessing he couldn’t speak.”

“Well, that’s a bit trickier.  Speech is inferred knowledge.  That poor squirrel couldn’t speak any better than a backwoods yokel.  But a city mouse that heard humans talk every day?  He’d be able to reproduce dialog before he’d change back, I’m sure.  And you’ve already toyed with advanced properties.  Our little dragonfly here is the product of two different concepts, but we could give him the ability to speak if he were human.”

The sorceress groaned.  “He still keeps that thing around?  Gaston isn’t sure what he wants to be, I’m afraid.  A wizard?  A cleric?  A druid?  I wouldn’t be altogether surprised to hear that he’d dabbled in necromancy.  I admire his pursuit of knowledge, but he’s let his life pass him by.

Again, Adelia took account of the area around her.  She stepped away from Lucinda, and bent low to scoop something up.  “Alright, this one might seem a little strange, but when my mother gathered the first fall harvest, she always made a delicious blueberry pie.  Now, I know you won’t be able to make that pie, but I’m willing to bet you’ve had your fair share of delectable foods throughout your travels.”  She uncovered her hand, and displayed the rock she held there.  “What do you think?”