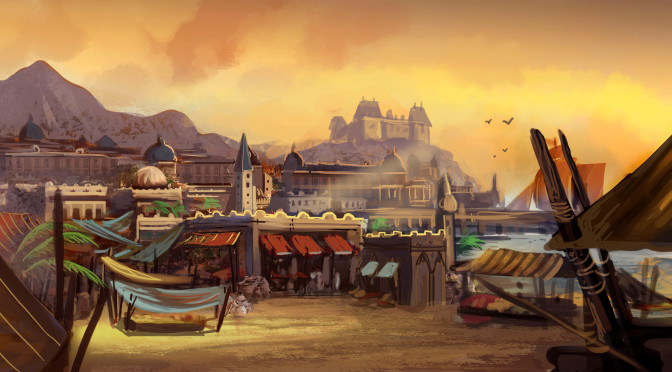 The crackle of the flames within the lantern was all he could hear beyond the wind that howled below.  High above him, the walls of the palace seemed like they stretched on toward the sky, but his focus drew to the view below.  The city’s many lights sparkled like a sea of stars, and he knew most everyone slumbered.

But there were some, he knew, that would still be awake at that hour.

Huffing and puffing, the young lad he had fetched earlier returned up the earthen ramp, a grin upon his face.  “I found him for you, mister,” he cried, holding out his hands.  “I found him!”

Far behind the boy, a burly man labored his way up the incline, hunched over from the journey.  From there, the only thing the visitor could see was the top of his head, but even in the darkness, he noticed the man’s hair was marred with sweat.

“Run along, child,” the man at the overlook said, flicking three coins into the air.  One by one, the boy caught them, and he wasted no time running off into the night.  The visitor offered no words to the new arrival, neither of encouragement nor condemnation.  He simply waited for the man to reach him and catch his breath.

Propping himself up as best he could, the man offered as sincere a smile as he could.  “You can call me James, if you like.  And you have my apologies.  It’s just… I waited here for hours.”

“And you were paid well to do so,” Faradorn said.

“It was an excessive delay.”

“And it was an excessive amount of coins.”

Gillette lifted his hands in concession, still wearing that mercantile smile.  “Right you are.  You paid handsomely, and I suppose I should have been here.  But I thought you would simply not show at all.  It was far later than I had ever expected to see someone here.”  For a fraction of a second, that smirk was replaced with an arching eyebrow.  “You do know what I do here, right?”

“You’re a guide,” Faradorn said.  “You show people the more important things there are to know about this city.”

“I may have done my research, but there’s a level of familiarity you have that would give me infinitely more insight to this place.  I’ve paid your fee.  If it’s not too late, I’d see you perform your duties and show me what this has to offer.”

Almost prying his pursed lips apart, Gillette nodded and endeavored to smile one last time.  “In that case, welcome to Versali-Virai.”

“…And if you’re ever in need of a hot pork sandwich, there’s no better place to get it than Dessam’s.”

Their trip had been meticulous, with Gillette stopping every so often to announce the history of a particular shop or whisper rumors about a tawdry affair.  Over-rehearsed as it was, Faradorn still found it amusing when his boisterous descriptions were met with angry shouts for silence.

“I’ll not be needing food during my stay here.  Just a place to rest my head where I don’t have to worry about catching bugs of any sort.”

The guide’s nostrils flared as he considered that statement, and he cocked his head to the side.  “Well, I suppose the King’s Charter is as fine a place as any to hang your hat, if you had one.  It’s a bit too pricy for my tastes—I’m naught but a humble guide, after all—but you’re more than likely equipped to handle the cost.  We’ll actually be passing it on the right here in a few moments.”

Street lamps lined that wide road, and just beyond, a quartet of them illuminated an intersection.  Faradorn looked at each one discriminately, until a new voice reached his ears.”

“Fancy seeing you this way this late at night, eh, James?”

“Garvey!” the guide cried, his voice cracking beneath his exuberance.  His friend arrived beside them, and the two men shared a handshake.  “You know me.  My job is never done.  This is Faradorn, a new arrival to the city.  I was just telling him the King’s Charter is a nice place to rent a room.”

“Yeah, if you’re the king,” Garvey said.  “Costs a pretty bit of gold the likes I never see in a week just to spend a night there.”  He stopped himself when he caught a look of Faradorn’s stern gaze.  He shook his head.  “I’m sorry, mister.  I didn’t mean to presume.”

“A man of your renown surely has his connections,” the visitor said to Gillette, ignoring the irksome fellow.  “Who would I inquire as to a bargain on one of those rooms?”

“Well I… I suppose Bernard would be a good place to start.  He minds the tavern, but I’m sure a few coins at the bar could help you work your way to a deal.”

“Excellent.  I shall make note of that for my return.  Shall we continue with the tour?”

Gillette turned his head so quick it looked like had been slapped.  He squared his jaw and nodded to his friend.  “I’ll see you some other time.”

Faradorn was already walking before his guide could show him the various sights in the southern side of the grand city.  The stranger seemed drawn to the lights, the cast metal lanterns just out of reach if the tall fellow lifted his arm up to them.

Gillette had to jog to catch up to his client, his heft swinging with every stride.  “If you needed me, you wouldn’t be walking off yourself,” he said, attempting a semblance of confidence.  “You paid me to show you about, and I will.  I’ll cut the idle chitchat, if that’s what you want.”

“It’s no bother.  I wanted to admire these designs.  These lights are all over the city.  You could see them from the overlook.”

“Yes, they’re almost everywhere.  But surely you’ve seen street lamps like these before.  Where did you say you were from again?”

“I didn’t,” Faradorn pressed.  At that, he began walking again, passing through the intersection to the southern street.

“I wouldn’t keep going that way,” Gillette said.  “There’s nothing out there but another path out of the city and of course the cemetery.  And this time at night… Well, who knows what lurks in the shadows?”

Sure enough, the visitor saw the edge of one pair of Versali-Virai’s gates.  They were closed at that point, with the only true entrance being the one just beneath the palace at the overlook.  Faradorn was pleased not to have travelled to that gate, though he did take some small satisfaction in the sight of the lamps that clung about that place too.