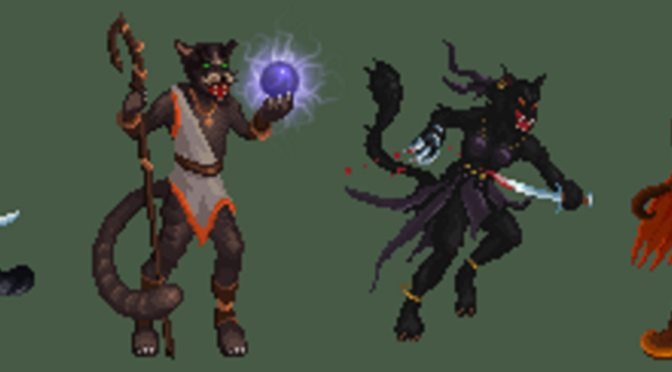 Hello there everybody!  We’ve got a new group of heroes to show off to you from our card game, which we’re getting increasingly further along with!  Testing is going well, and we’re excited to drop some major bombshells regarding what this game is all about very, very soon.

Fun fact: this group that we’re featuring today—the kaja—was almost prominently featured in the 2013 book, The Enemy Within. But because that book was bloated at over 800 pages, they were cut from the material.  Since then, they’ve appeared in short stories, and will feature in the future book, Dragonspeaker.

Let’s not spend too much time talking about the books just now.  You guys are here for the art!

They’re pretty much as different as they come, no?  As we’re prone to do, let’s get right down to business, and tell you what each of these adventurers do that makes them special. 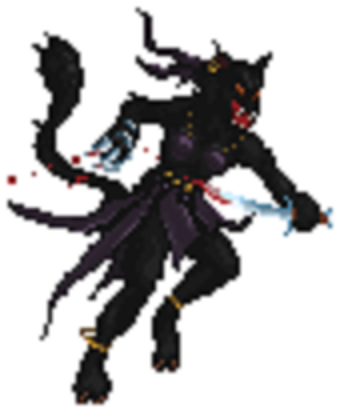 Cath Oona comes from a tribe called the Pan’thar (again… the naming isn’t all that impressive, but you can blame that on her tribe, not on me).  With all that black fur, Cath makes an excellent assassin. Even though she’s not one of the most well-armored people, she’s still got an insane amount of fortitude, and she’s a force to be reckoned with. 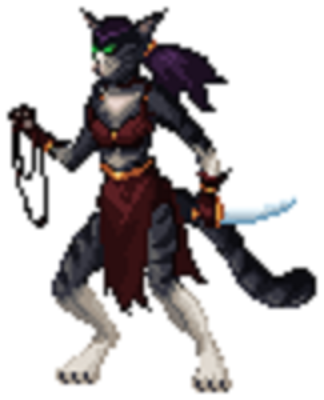 Fe’Pavi is perhaps our most famous kaja, short of Kaiyonani, who is getting her own novella soon enough.  While that other kaja relies more on the aid of a dragon, Fee prefers to put her trust in other mortal races.  Together with Benton, she accounts for the two characters we have in this game from the short story Return of Faith.

Jagsis Hauth hails from the desert sands of Saveon, where his tribe is in constant danger on account of rival kaja tribes, various beasts that live in the wilderness, and the recent arrival of humans from the north.  Of course, his tribe is wary of him, as well, especially since he found the magic orb that gives him magical prowess that he didn’t have before…

Olinna is a very peculiar creature.  More regal than the other kaja in this set, she also puts her faith where not many of her kind would. As a priestess of Animus, the god of life, Olinna has spent her time devoted to healing the sick, and easing the suffering of those that are committed to death.  When the dungeon appeared, however, she knew her journey would take her elsewhere.

And there you have it.  That’s our latest set of awesome adventurers, this time with a little more fur than we usually have.  These are some pretty cool cats, if I do say so myself, and we hope that one of them is your favorite when the game eventually comes out!

One thought on “Sprite Art – Kaja”