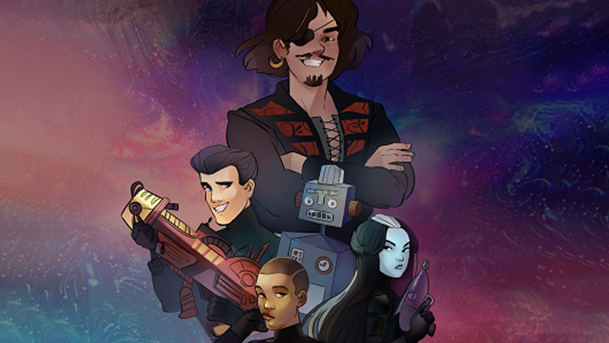 Greetings travelers.  We’re starting off the week with another trip to the Otherworld, and indeed another trip through space.  Today’s journey is a fabulous one, which puts forth a lot of beautiful messages, including appreciating everyone for their qualities, and loving yourself.  Prepare for departure.  You’re about to pull back the curtain and visit Omega Starlite.

C.J. Canady excels at writing characters that you will absolutely adore.  He also builds them into a universe that feels rich and lively.  Most importantly, his writing feels like it’s built out of the utmost passion and devotion.  Omega Starlite is an incredibly charming book (and character), and you’ll grow to love the cast.  There are laugh out moments and some emotional ones, and through it all, you’ll be glad to be along for the ride.

Reunion. Liberation. Truth.
The greatest opportunity involves the greatest risk.
———-
In a distant corner of space, amidst the lost souls on planet Hamblin, Omega Starlite is eager to start anew. Interviewing for a medical position aboard Ricardo Arnaz’s ship, Omega nonetheless struggles with the captain’s purported mission: one to find his parents on the Lost Planet, known by some as “Earth”—no more than a fairy tale backdrop. Overhearing the conversation, humanoid Elara Shaoqing can’t resist involvement. Unlike the majority of her compatriots, she has strong reason to believe that Ricardo’s terminus does exist. Not only that, Elara possesses a personal longing to make it as well. Omega is wary of the journey but resolves to leave Hamblin behind. Long trapped in a violent relationship, few other viable options remain . . . but running away proves dangerous, itself, when guided by a reckless party. Captain Arnaz fosters secrets prone to rouse the wicked. Bent upon capturing Starlite at whatever cost, he who hunts Omega won’t be stopped without a mortal fight. Should Omega hope to vanquish him, protecting the galactic legions, latent power—deep and dark—must firstly be awoken.

Canady’s work is heartfelt and entertaining.  This is the kind of story that you’ll race through in one or two sessions, visualizing the adventure and all the antics that brought it to life.  It’s a big, beautiful universe that is coming together for this series.  Canady is hard at work on the sequel, so now’s as good a time as any to get your head start.  Check out Omega Starlite on Amazon today!