Hey there folks.  It’s time to wrap up our base set of Quantum Quest chambers.  Now don’t you fret.  We still have a whole bunch of stuff to show off as we make our way toward our Kickstarter in November.  With that right around the corner, we’re going to be working harder than ever to bring you some amazing content.

For now though, let’s finish up looking at these chambers!

This set is going to be heavy on the Indiana Jones references, but both times we ended up pulling our Indy (or Indy lookalike) from the set.  I obviously love Indiana Jones, but we’re not sure we’re popular enough yet to start doing the crazy pop culture references.  But I mean, if we hit north of $400,000 at Kickstarter, you can be sure we’re going to start going all out 😉 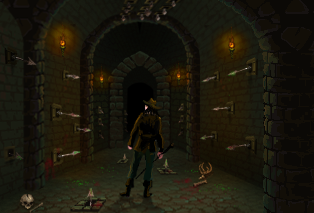 After we pulled Indy from the piece, you could see just how deadly this long corridor is.  It takes a special kind of adventurer to avoid these traps, so hopefully if you go traipsing through the dungeon, you have an expert! 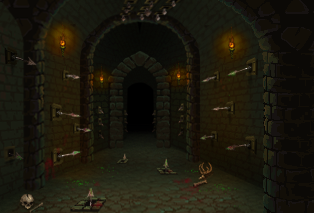 The Poison Dart Trap’s bigger, meaner, older brother, the Poison Mist Trap is one of our most powerful chambers.  It deals damage to everyone in the room, so you just need one dummy to make a mistake.  Luckily, if you have a necessary hero, they can mitigate some of that damage. 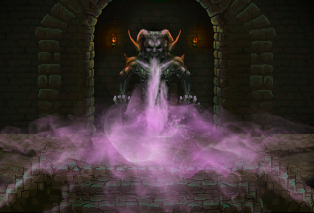 Here’s our other Indy reference.  I loved that sequence in Raiders, and I thought it would be a cool idea to integrate into Quantum Quest.  And it does spruce up the game in some pretty cool ways. 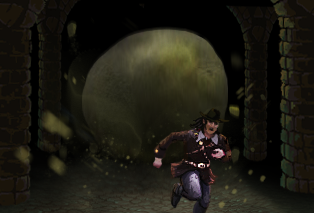 Here you can see we’ve moved on from our Indy cosplayer, and put one of our other characters in his place.  Rolling Boulder not only deals damage to the party, but also displaces them from their spot in the dungeon. 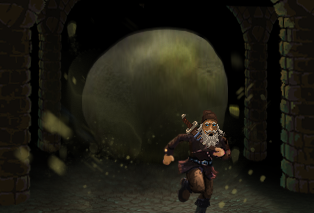 This is one of those cards that can either be a boon or a curse.  When you enter the room with this altar, your adventurers will be compelled to sacrifice one among them, but it isn’t without reward. Another adventurer will be delivered to the party in their stead. 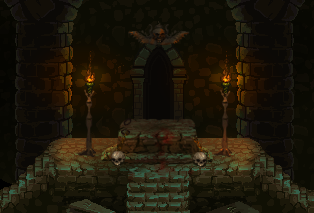 This is supposed to be kind of a nod to the Fable series with their demon doors.  These doors can be a huge pain in the butt, especially if you don’t have a wily rogue in the party who can spot their inherent danger.  The shadow door whisks the player ahead through the dungeon, where they encounter even more dangers! 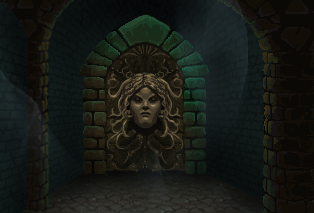 How’s this for an RPG staple? Slimes are the go-to enemy for a lot of old adventure games, and we couldn’t open up our base set without including one of these guys in it.  These ones aren’t exactly a pushover though.  Coming into contact with one of them is sure to slow your progress.

Oof.  This chamber hits you while you’re down.  It’s one of our most powerful rooms, because if another player owns it, they get rewarded for it.

The opposite of the Shadow Door, the Spectral Hand pulls you back through the dungeon.  Luckily, this ghostly hand doesn’t damage you further when it drops you off. 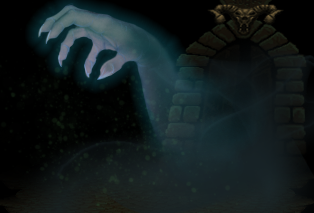 Arguably one of our most damaging chambers, this room dumps you into a mess of pain.  But if that wasn’t enough, it forces you further through the dungeon as well, where you’re prone to incur even more damage! 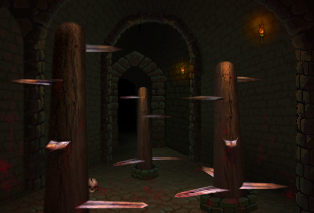 The first version of the card looked a little too much like a 3D dungeon crawler, so we ended up making a 2D variation that felt a little more “Quantum Quest.” 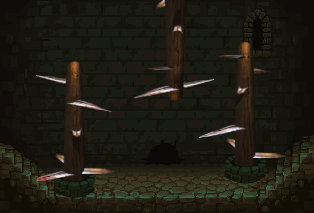 Here it is ladies and gentlemen, our final chamber.  A little bit like Whirling Blades, but not nearly as punishing, Whirlwind does a tiny bit of damage to a few characters before whisking them off, further into the dungeon. 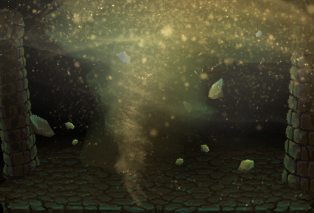 Well, that’ll about do it for our awesome chambers.  We’ll be back in a couple of weeks to show off some more pieces of the game, and then before you know it, the Kickstarter will be here!