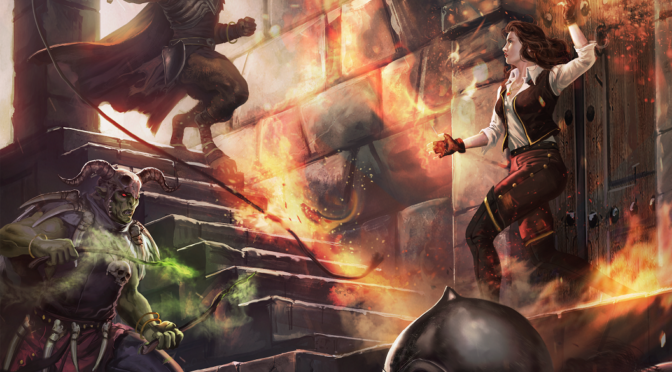 The ground trembled beneath him with every step, and he knew he couldn’t keep up that pace for long.  He could hear the roar of the fire all around him, even as the beast roared and charged across that battered landscape.

Rhys knew that his time was running out.

“Alright, Virgil,” he whispered as he pushed past the agony in his lungs.  “You told me to be here in these woods.  Now show me why.”

The traveler was wrenched from that thought when the beast slammed through the nearest copse of trees, knocking down branches and scattering the autumn leaves.  Before the creature opened its mouth, Rhys could feel the heat from its body.  As soon as he saw the beast’s teeth, those dried leaves burst into flames.

Only a moment later, a wave of fire came rushing from the creature’s mouth.  The villagers had named the beast appropriately, Rhys considered.  The Hellhound of Verna had earned its moniker.  Soon, he would see if it also lived up to its reputation.

That blast of heat barreled through the area, and when the fire evaporated into the air, Rhys was no longer in its path.  The beast looked to and fro before glancing upward.

The man had talents of his own, and he wasn’t shy about using them.  He walked up the side of the nearest tree, a healthy oak that hadn’t yet been consumed in those flames.  He ascended it as though it were a gentle uphill climb, though it sprouted straight up into the air.  In time, he reached its lowest bow, and swung up to it with ease.

Below, the hellhound charged at the tree, attempting its own ascent.  The sphere of magic that Rhys enacted was still in place there though.

Gravity ceased to exist in its truest form wherever Rhys willed it around him.  He had long ago learned to control it, manipulating it so that he could walk up walls or perch upside down on a ceiling.

The hellhound couldn’t comprehend why its huge paws wouldn’t stay on the trunk of that tree.

That frustration became apparent when the beast opened its mouth again.  From his vantage, Rhys saw as the inside of the hound’s mouth radiated shades of red and orange.

He didn’t waste another moment, leaping out into the air as another rush of heat and flame tore through the area.  Rhys floated down from the bough like a feather caught in a gentle zephyr.  It was then, when he was airborne, that he saw his companion.  Virgil’s silver body caught the reflection of the starlight, and that sparkle was not lost to the man who tussled with the fire-breathing hellbeast.

Though he knew that his friend was offering up what was sure to be a brilliant idea, the distraction nearly cost Rhys his life.  He couldn’t feel as the creature’s weight shifted, but he heard its angry growl, and looked over his shoulder just in time to see it leap into the air.

As easily as he was able to manipulate that field of gravity, he released his hold on it.  Rhys fell to the ground like a stone, landing on his knees and tumbling forward while the hellhound soared overhead.

The flames in the forest illuminated the unexpected battlefield then, and his terrifying foe.  The Hellhound of Verna towered over him, the man only coming up to the monster’s chest.  Its fur and markings reminded the man of an oversized wolf, shades of brown and grey accentuating its shape.  Crimson eyes stared at him for a moment as the wolf spun about, and though they had caught the man’s attention before, when he first encountered the beast, it was the glimmer of violet on the creature’s forehead that had earned his focus then.

The shard of the orb was taunting, Rhys, it seemed.

Its owner, that vicious, hungry hellhound, was not so keen on games.  Its claws raked into the ground like it was part ornery bull, and it snarled again, gobs of saliva separating and growing thin between those dagger-sized fangs.  Each of those was longer than the blade that Rhys had on his hip, he realized.

The monster hunched low, the fur along its spine standing up as it prepared to make a snack out of the man who dared to enter its woods.

A shrill whistle entered the air, and the beast’s ears drew back.  It turned to its side, trying to make sense of the noise, but just as quickly, its hunger drove its attention back to its quarry.

Rhys wasn’t there.  Already airborne once more, he soared out over the hellhound, until he landed on another branch, though it was considerably less sturdy than the last.  He kept his sphere of manipulated gravity moving with him as he went along across the treetops.

One other boon of his power, he was thankful for—his footfalls were nearly silent.  He was already well far away from the monster before it caught his scent on the wind and spun about.

“Rhys, hurry!” Virgil called out.  That metallic thrum in his companion’s voice carried across the forest, but it was lost beneath the sense of urgency.

Once more, the traveler dropped to the ground; that time he remained on his feet, kicking up leaves and dirt as he went.

Meanwhile, the hellhound charged through trees, ripping them from the ground at the root.

“You said to meet you east of the town!” Rhys called out to his companion as he ran.  He couldn’t see that shimmer of starlight then, but he was certain he was heading in the right direction.

“This is east, Mister Rhys,” Virgil called out.

The traveler grumbled as he shifted directions ever-so-slightly.  In only a few moments, he ascended a small hill, and saw his ally beside a forked tree up ahead.

His companion did as told, spinning about and climbing up the next hill.  “Right through, Rhys,” he bade.  “That thing will keep going long after you’ve collapsed from exhaustion.”

Rhys growled in contemplation.  “Don’t remind me,” he muttered.

He felt the hot breath of his pursuer, but he was certain he was running as fast as he could.  As he neared that strange tree, he leapt into the air—that time without the use of his power.  His feet landed in the divide where the trunk split off in two, resonating with a thrum.  He hopped down again, turning around just in time to see the beast make one final lunge at him.

That tree did not fall like so many of the others.  That tree endured.

With his lips parted in amazement, Rhys watched as the twin trunks closed in, tightening around the hellhound’s neck.  In a mere moment, the beast was rooted in place, as sure as the tree was.

“Get on with it!” Virgil called out from up above.

Sure enough, the hellhound was pawing at the tree, trying to wrench its head from the snare it was in.  Rhys took a deep breath, and hopped toward the monster, his eyes fixed on the purple glimmer in the tuft on its brow.  Out came the dagger, the beast snarling at the sight of it.

The tip of the blade slid in just at the bottom of that sliver of what looked like glass.  Those snarls gave way to a shocking yelp, and a violet flash burst forth in the area, like a huge bolt of lightning.

When the light faded, the hulking beast was no longer present.  Instead, in the crook of that artificial tree, a much smaller animal stood, very much confused and scared.

“This is what the villagers had seen before,” Rhys surmised.

“Big enough to bring down some livestock, it would seem,” Virgil stated as he walked back down the hill.

The closer of those travelers glared at the canine, noticing that those red eyes remained there.  The hellhound hunched low, bowing, it seemed.

Rhys clicked his tongue and lunged at the creature, scaring it out of the tree.  It leapt from that unforeseen perch, and took off into the forest, toward the burning, smoldering trees it had left behind moments before.

“Should we not have disposed of it?” Virgil asked when he drew close enough to hear a sigh escape his friend’s lips.

“It’s been through enough,” Rhys said.  “You know that it was the orb that caused the aggression and the power.  It was that piece of the Void that changed it.”

Virgil nodded, pulling his hood down a little further past his brow.

That was never enough to shield the truth from Rhys.  He knew what was there beneath the leather cowl.  Just enough violet light cast out from that darkness.

Of course, Virgil knew that it wasn’t quite a secret.  Rhys was the first one to find him—the first one to help him understand what life was, and how he had managed to be blessed with it.  As long as he traveled with Rhys, it seemed that blessing was set to continue.

It didn’t hurt that Virgil had earned his keep during their pilgrimage.

He drew nearer, merely out of habit at that point, and felt the fluctuation of the shard in his forehead.  A subtle hum attuned to another noise from his friend’s hand and another louder one from the pouch by Rhys’ side.

That odd song stopped all at once, and a much louder sound howled to life behind them.  The travelers turned to see the rippling vortex just before them.

Rhys stepped away from Virgil, and the portal shrunk in size once more.  A silver brow arched as the metal fellow considered that decision.

Rhys nodded.  “By all accounts, we should be going.  But this last one was draining, don’t you think?  I could use a rest before we see what next monster or villain stands before us.  Time will be waiting for us no matter what.  This is our best chance for a moment of respite.  The people of Verna will be very welcoming now that their monster isn’t going to be bothering them.”

“Not them, but maybe their livestock,” his companion muttered.

“In any case, they’re able to handle the hellhound from here on out.  With the orb fragment no longer influencing it, we’ve done our part.  Now, if you don’t mind, I wouldn’t mind getting back to Verna before midnight.  Perhaps the tavern is still open, and we could get some warm honey mead.”

Virgil followed Rhys back through the forest, the faraway flames dying out in the night breeze.  “As always, I’ll be watching you drink it, and wondering what it’s like to be able to taste something.”

While the two travelers conversed about their differences, the forest behind them grew quiet…

…except for a small, rippling portal, which started to grow once more.