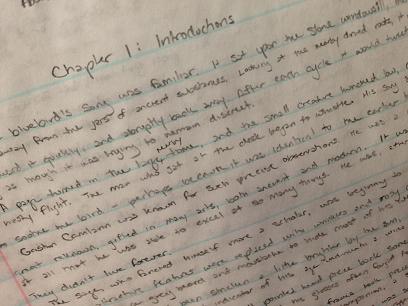 I love equating everything I do to an RPG.

In this case, I’m talking specifically about the series of five shorter stories I’m going to be telling over the next few months.  I’ve been saying for the longest time that this quintet was going to be a collection of novelettes – that is, they were going to be significantly shorter than I expected they’ve become.  As I push forward, however, it seems that each of them is developing a littler further than I intended.

I’m a firm believer in allowing a story to tell itself.  When each of these first three that I’ve been working on have exceeded the planned six chapter arcs that I anticipated, I wasn’t dissapointed.  It seems to me like the magic number is eight, but, as you can tell, I’ve been surprised before.

Therefore, the novelettes are hereby being upgraded to novellas.  There will be much rejoicing.

Because of this change, I’m going to adjust my plans of releasing them somewhat.  Originally, it was my intent to throw them up on the Tellest site in little two-bite increments.  The second week, you’d be able to see the first two chapters, the following week, I’d remove the first chapter, and instead add the third chapter.  That’s all very confusing, especially when you add two more chapters to the back end.  So instead, the game plan is to keep each chapter up for the featured novella.  You’ll have eight weeks of content, back to back, probably on Tuesdays (we’ll call them, Tale Tuesdays).  They won’t be removed from the site until the ninth week, when they get published to kindle.

As of right now, I’m committed to a late December or early January release for the beginning of this journey.  That would lead us to a Tuesday, March 4th publication of the first story.

It always boggles my mind how excited I get for this thing that just once upon a time started as a little speck of ingenuity in my brain.  I can’t wait to share it with you!