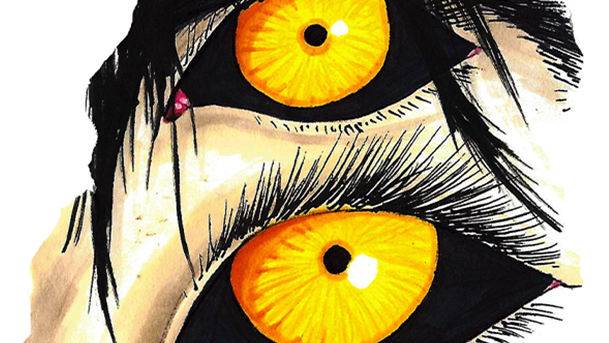 Greetings travelers of the Otherworld.  Recently, I had a chance to work with Felix Cipher, who has been creating the books in their Heroes of MidAria series, and recently released a retooled first book in the set.  I had the privilege of interviewing Cipher and figuring out how all the gears work in their world.  Read on to discover more about the author and MidAria.

Tellest: Hi there Felix!  I appreciate the opportunity to have a chat with you.  One look at your blog shows that you have a ton of work that you’ve put into the Middle Realms, so getting the time to chat with you feels extra special.  We’ve got a good amount of ground to cover, and I’m excited to help others get to know you better!

Felix Cipher: Hi! Thanks for giving me a chance to speak with you!

T: One of the things that I always try to learn about the authors I talk to is who helped to shape them as storytellers.  Who or what inspired you to write?

FC: I’m not sure if one specific person or event ever inspired me to write, though I believe my high school experience may have had a lot to do with it. I turned to writing when I wanted to vent about my own struggles through the eyes of someone else, and I had always grown up loving the fantasy genre. So, I combined the two, and writing actually became a major coping mechanism for me when life got difficult.

T: Do you recommend writing as a form of therapy?  As you write longer, does it help to separate your struggles from the character’s struggles?

FC: I would always recommend writing as a form of therapy. I’ve found that it helps me a lot to jot down my thoughts, and it helps me channel my emotions -both positive and negative- into something productive. The longer I write, the more I find that some of my own struggles run parallel to the struggles of my characters. However, their experiences are usually more exaggerated versions of what I have been through. 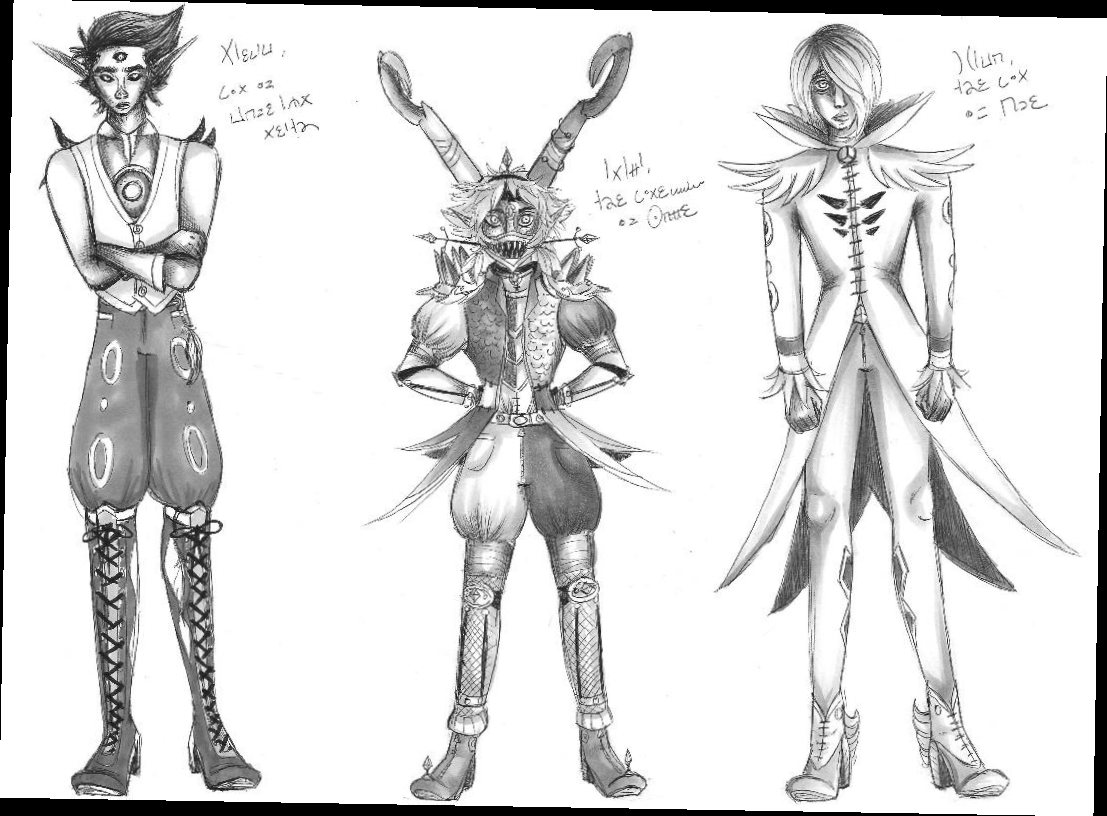 T: Has writing through your characters’ issues helped to ease any frustrations or stresses that you may have had?

FC: Very much so. It’s a great way to turn my personal struggles into something creative and imaginative!

T: I may be wrong, but it looks like you’ve also been doing a lot of art for the series.  Do you find one more enriching than the other, or is it one of those things where they both present value in their own way?

T: I think that it could be enriching, especially to readers who are trying to find themselves a little closer to you and your interpretations of your characters and the things within your world.  With that in mind, do you suggest a physical copy of your book over something like an ebook?

FC: I would definitely recommend getting a physical copy over an ebook. Not only is there more cover art to discover, but there are also a couple of hidden secrets for readers to figure out that can’t be seen with a digital copy of Heaven’s Demons.

T: Do you have any advice for your readers who may want a signed copy of one of your books?  How could they get a hold of your autograph?

FC: I will be doing more giveaways in the future, including a very special one here in the next few months or so, so that would be a great opportunity to get a signed book. I also hope to hold local signings once I am able to, but with the pandemic, it’s a bit difficult at the moment. 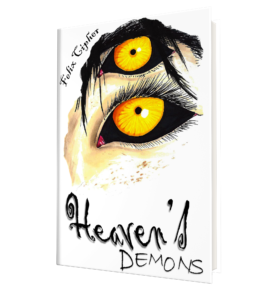 T: Heaven’s Demons originally came out in 2017, but you announced a complete rewrite in 2019.  What prompted you to want to revisit the original story, and what do you feel comfortable telling readers about what changed?

FC: I wrote the original version of Heaven’s Demons as a sophomore in high school, and ever since its initial release, I had been unhappy for a plethora of reasons. As I continued to mature over the years, I noticed many technical errors in my manuscript, from typos to poor flow of words, of which I had previously not noticed back in 2016 or 2017. My goal with the republication was not only to tidy up my work, but also to add a few small but significant plot points that are vital to the rest of the series.

T: Originally, you had also written Angels of Hell, which fit into the original storyline.  Does your new plan deviate enough to steer clear of Angels of Hell, or has that been changed to fit into your new MidAria as well?

FC: Angels of Hell is the second book in Heroes of MidAria, and I had originally begun the publication process in 2018. However, that project was put on hold when I put all my efforts towards fixing book one. I still plan to release Angels of Hell, as the plot remains highly relevant. The only thing I’m uncertain of is the time frame, but I’m hoping to have Angels of Hell released by no later than 2023.

T: These books were going to fit into a trilogy, but—and especially now, with the rewrite happening—do you ever find yourself stretching your thoughts and your imagination farther, and finding yourself wanting to expand beyond the trilogy?  Have you thought of prequels or distant sequels, or even spinoffs?

FC: I have indeed! I describe the main storyline books as a trilogy, though I do have a total of eight books planned for the series. Though, that number is subject to change in the future. From paperback short stories to an in-depth look at the Middle Realms, you can expect plenty of extra content.

T: Eight books is more like it!  What can you tell readers about the long-term scope of the project without spoiling too much of what’s going on in the earlier books?

FC: All I can say is that there’s much more happening than meets the eye. Even in Heaven’s Demons, which is very much an introductory tale to the world of MidAria, I’ve included many subtle details that hint to the future of my series. Though, plot points do start to become much more prominent in the coming books.

T: Is MidAria the kind of world you think you’ll stick around in even outside of this big saga you’re working on?  The world is pretty large and has potential for other side stories if you wanted to explore.

FC: I’ve made MidAria so vast for this particular reason. I can see more happening with the world in the future, but as of right now, I’m sticking with 9 – or, well, 8 books. Whoops!

T: What have you found to be most challenging in the writing and publishing process?  Is there anything that gives you a splitting headache when it comes to storytelling?

FC: The publication process is surely long and tedious, but perhaps the thing that irks me the most is editing my work tens of times over. Revising and editing are some of the most important parts in the writing process, but sometimes, it just hurts my brain to read the same story over and over again, trying to pick out flaws. Thankfully, though, I’ve started using text-to-speech features while looking back over my work. That’s been very helpful, because it gives me a chance to hear my own words being read back to me, and it provides me with a different prospective.

T: Are you a solo shop, or do you lean on other people to help with your projects as well?  And either way you work, do you have any advice for other writers who might be doing the same thing you are doing?

FC: I’ve always worked alone, but that’s just a preference of mine. I think the advice I would give to other writers like me would be to always write down any creative thoughts you may have, even if they don’t make sense with a storyline quite yet. I know I have personally had scenes in my head that occur much later along in the plot, and I wrote them down a few years back long before I was working on my fourth, third, or even second book. In the end, I’m glad that I got those thoughts into writing, as it helped me to structure my series.

T: I found your encoded page on the Heroes of MidAria blog, and it made me want to ask.  Did the secret code there come first, or did you give yourself the moniker before then?

FC: Both the secret code—known as the Ethereal language in my books—and my last name came about at around the same time. I’ve left behind enough clues throughout Heroes of MidAria to decipher the encoded page, and with enough effort, I believe it to be translatable.

T: Are there other secrets and easter eggs that you have in your story, or is that one cipher code that you have on your website just super special in that way?

FC: There are many easter eggs throughout my series. I won’t give out any clues, but they’re scattered all about. Some mare obvious, and others less so.

T: Where can people find out more about your books and your world?

FC: Everything you need to know can be found at https://heroesofmidaria.blog. Additionally, any further questions can be sent to me directly through the contact me page on my website.

T: Thank you to Felix Cipher for carving out the time to give us more insight into what’s going on in the world of their books.  With MidAria surging forward with reinvigorated passion, it’s a great time to check out the first book in the series.  Pick up The Heroes of MidAria: Heaven’s Demons on Amazon today!