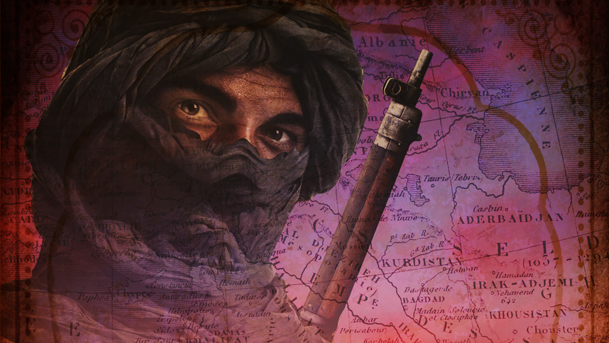 Howdy folks!  We’re moving right along with our reading, and taking another stop in the Otherworld.  We primarily deal in traditional and contemporary fantasy, but every now and then we get an awesome historical fantasy that takes you right back to classics you might have enjoyed as a child.  If that’s the kind of thing that gets you moving, we have a treat for you today!

Destiny’s War feels like an Indiana Jones or Uncharted fantasy.  The incredibly talented Pyram King sets his book in the middle of World War I in the middle east, so as much fantasy as the tale has, it’s also grounded in reality.  There’s something about that which raises the stakes and makes the obstacles that Marion faces feel all the more daunting.  Destiny’s War: Part 1: Saladin’s Secret has incredible layers of depth, and teaches you a lot along the way.  King has mastered his craft, delivering a story that feels like a classic excavated from long ago.

The world is at war. Deep in enemy territory, Marion discovers a secret that will tip the balance of power. Facing a mysterious enemy, time is not on his side. Will Marion make it out alive or perish protecting the secret?

The Great War erupts across the known world pitting empires against nations. The Middle Eastern desert becomes a battlefield as the Ottoman Empire battles against the pressing British Forces.

It’s 1917. By the time he’s eighteen, Marion is a reporter, a spy, and an archaeologist – but not necessarily in that order. After his mother died, he ran away from home to follow in the footsteps of Sir Richard Francis Burton, which he did both literally and figuratively.

Traveling with the Imperial Camel Corp deep into enemy territory, Marion discovers a history and a secret dating back centuries. The myths of Saladin, Sinan, Assassins, and Templars hide a truth of an ancient war.

Marion does not know who to trust when a mysterious new enemy seeks an artifact which may hold a secret that could tip the balance of power.

If you like Indiana Jones, the adventures of Lawrence of Arabia, and the mysteries of Dan Brown, then this series is for you.

Pyram King has an absolute hit on his hands with the Destiny’s War series.  Yes, another book is just around the corner, and you can learn more at the Destiny’s War website.  In the meantime, it’s highly recommended you get your hands on the first book in the series, as it’s sure to be one you’ll enjoy.  Join Marion as he embarks on an adventure for the ages.  Check out Destiny’s War: Part 1: Saladin’s Secret on Amazon today!