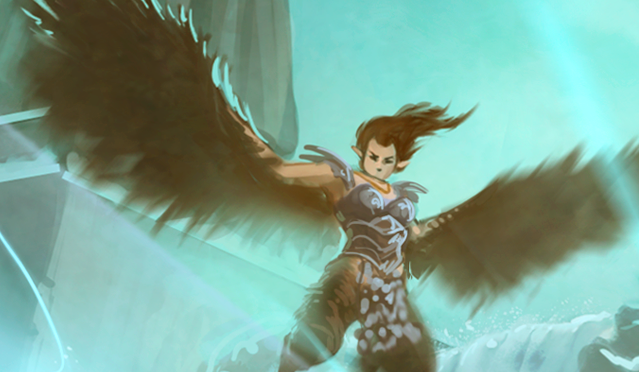 There are very few races on Tellest that can take to the air.  Among them are the harpies, a people who appear to be women with bird-like features.  They have feathers that sprout from their arms, typically from just beneath their shoulders to the wrist, where human hands are.  Many of them have tail feathers as well.  Their shapely legs will turn into talons at just beneath the knees.  Most harpies have very angular features.  Regardless, their torso’s and faces are very similar to that of a human’s.  There are some subtle nuances, however.  Irises are wider; ears can be slightly longer and pointed, sometimes feathered.

Though most encounters with harpies seem to imply that there are only females, there are, in fact, males of the race.  They just appear in smaller numbers.

Because of their anatomy, most harpies prefer to wear very little clothing.  This makes them a very perplexing social entity, because they appear to have no shame.  Even in battle, harpies will typically wear the bare minimum.  Oftentimes this appears as miniscule smallclothes or a think draping.  Most harpies need to be sewn or laced into their garments.

On the other hand, harpies tend to wear jewelry, or pierce their bodies in many ways.  Colder climate harpies typically tend to paint their bodies or attach jewelry with special adhesive, while others will pierce anything from their ears, to their navels to their nipples.

Conversely, there is a subgroup of harpies that identify themselves as the Kyrie that finds it almost sacrilegious to defile their flesh.  Yet, these harpies take great strides to enter battle with full suits of armor.  Due to their heavier, wider wingspan, they can accommodate the extra weight.  They also conform slightly to human norms, attempting to fit their clawed, bird-like feet into greaves and boots.

The harpies did not appear to Tellest until after the return of humans.  Thus, it is widely assumed that the two are somehow connected.  Because their features are so strikingly similar, many scholars believe that the strain somehow led to the facilitation of a bird-winged woman, who went on to spawn many more like her.

Harpies are extremely territorial.  While they often encounter members of the other races during their travels, they rarely pursue any kind of confrontation.  Many times, the landlocked journeyers below won’t even know they’re in the sights of the winged women above.  When someone is deemed to be intruding on their roost or even anywhere near it, harpies can become violent beyond all reason.

Despite their furious appearance in those moments of aggression, they are quite devoted within their communities.  Helpful to one another and nurturing, harpies are very tightly knit.  This of course leads to more propensity for violence, for their thirst for vengeance also happens to run high.

Due to the high volume of females within harpy culture, the winged women are typically in control.  Males are not to pick their mates, and often are given as gifts.  Even with that in mind, harpies typically retain a monogamous relationship with their mates.

Because male harpies are so rare, however, it is said that females will often kidnap humans to become their consorts.  The human traits are more recessive, leading to an ongoing line of harpies.

Among the races of Tellest, harpies are one of the few that lay eggs to birth their young.  Despite a very human-like anatomy, their biology still has some strange traits.  Harpies lay eggs about every six months.  A male will have to fertilize it while it is still in the female’s reproductive system, however.  It cannot be fertilized after it has been expelled.

Harpy young mature at an alarming rate.  Though the egg that a harpy mother will produce is typically about half the size of a human baby, it is surprisingly sturdy.  After birth, the harpy young will only take about twelve years to reach adolescence.

For unknown reasons, more females are born than males, which have helped to shape their society in a matriarchal pattern.  While females typically rule over their groups, males will stay at home to protect the roost and their young.

Despite their fury and their propensity for violence, wisdom is a widely respected trait among the winged women.  Typically, the oldest harpies become the most influential.  There are some that are known to commune with nature in some ways, and are declared matrons, regardless of their age.  These harpies typically choose their own flock and are usually awarded with one or more of the rare males as part of a ritual.

Harpies are also known to mourn for their dead.  It is said that the haunting winds that people hear are the cries of harpies in the skies.

The harpies are not on good terms with several clans of dwarves that they’ve encountered that lived within mountain ranges.  It has also been said that due to a shared home in Minoa, they do not get along very well with minotaurs.

There is a complicated relationship that the harpies have with avarians.  Because both races fly, they are bound to encounter each other from time to time.  Because avarians police the skies, sometimes some of the questionable actions the harpies endorse, like stealing food and livestock, they’ve come to blows with the other bird-like race.

Despite many of the conflicts with the goodly races of Tellest, there is one variant of the race that will oft protect them.  Kyrie watch after their human neighbors, and will often fight alongside them in order to keep them safe.  They often travel alongside raven familiars, and are one of very few groups of harpies that do not roost in high up places.  Instead, they typically dwell in the trees around lakes and rivers.  Often, they are seen living beside swans.

Harpies are well-spoken and intelligent.  They speak common fluently, but are keen enough to pick up on neighboring races’ languages as well.

Harpies tend to pass down their tales aurally.  Beyond crude drawings near their roosts, almost nothing is written down.

The harpies are one of the races of Tellest that, curiously, do not believe in any of the common gods.  Rather, they believe in various spirits that they invoke in their rituals, including spirits of the storm, rain and wind.

Known to many of the races of Tellest is the tale of Babayan.  She was apparently a monster of a harpy that hid in the shadows, or high in a thundercloud and would snatch those foolish children who didn’t give reverence to the skies.  She preyed on the foolish.  Even the harpies were frightened of her, and told the stories to their fearful young.

Thanks to the ability of flight, many harpies do not need technological advancements.  Their weapons and tools are very rudimentary, mostly because they can utilize their talons to great effect.

The harpies typically don’t express much interest in magic.  Rather, a select few are “chosen” by the air spirits, and are bestowed uncanny powers.  These chosen harpies are then called Matrons.  It is not unheard of to have several matrons within the same flock.  An example would be both a Matron of the Storm and a Matron of the Wind.

The Kyrie, thanks to their exposure to humans, are a little more exposed to the arcane arts.  They primarily rely upon clerical magic, but some are known to dabble in offensive spell casting.

Harpies will very rarely meet enemies head on because of their flight capabilities.  Still, when they need to meet a foe in battle, they tend to swarm and surround.  In the air, harpies are excellent warriors and hunters.

Over time, the avarians and the harpies have become intense rivals.  Avarians are the watchers of the skies, and they work tirelessly to protect their groundborne friends.  Because of the actions of the harpies, wars have broken out multiple times, where the avarians have tried to cull the other flying race in an effort to curb their crimes.