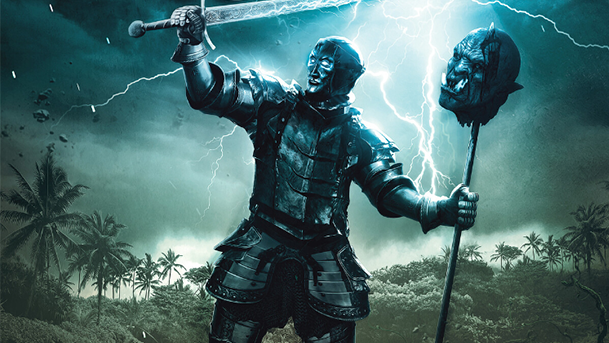 Hello there folks, and welcome back to another day of Otherworld goodness.  This year has been a banner one so far for great fantasy books, and we’re showing no signs of stopping anytime soon.  In fact, to go along with it, we have a great dark and gritty fantasy debut that will knock your socks off.  This is The Banner of the Broken Orc: The Call of the Darkness Saga: Book One.

It’s clear that author Aiden L. Turner has a great love for the fantasy genre.  He delivers a wonderful entry in The Banner of the Broken Orc: The Call of the Darkness Saga: Book One, which doesn’t shy away from the darkness that can be found in the genre.  Yet there is also light and hope in place, as Turner has created a rich world here that touches on everything from religion to ancient lore.  He also turns some of the conventions of fantasy on its head, exploring biomes that we don’t often see, and discovering familiar races there in spectacular new ways.

Monsters will rise from the depths. Monsters will sit on gilded thrones. Horrors unimaginable to waking eyes seek slaughter amongst peace-loving folk. Violent warriors, with scarred faces and bloody swords, will challenge the rising of the Darkness.

Before the beginning there was only darkness. Complete and unbroken darkness. Then He who is creation arose, and the darkness sickened Him. He brought forth His power and from His will came life. Beautiful, diverse and numerous. But with the birth of life the darkness became aware, knowing and vengeful. A struggle ensued, vast and without hope of end. A grand battle between the master of nonentity and corruption, and the lord of life and growth. In this grand battle, spanning both time and distance, champions shall rise, brave and strong of heart and body. But take heed fair reader and beware: the majesty and wonder of creation is only surpassed by the horrors of the Darkness. Not every monster has fangs and claws. Not every slave is bound in iron. Not even the purest of heroes is untainted by evil.

The world of the Elves is failing. No longer are they creatures of grace and connected with the energies of life. Cut off. Isolated. Vengeful. Cameos, chieftain, steps forward to be his people’s strength, yet he is plagued with doubt. There is darkness amongst his kind, hidden, yet bending the weak-willed to servitude.

King Kane the Cruel, first of his name, has undoubtedly earned his reputation. His cold heart, warmed only by his lust for suffering, now serves the one who calls his name in the deep of night. His dreams go far beyond his sadistic cravings and sexual barbarity. He dreams of wealth. He dreams of glory. He dreams of the darkness.

Gymir, Death Dancer in the old tongue, stands before a horde of the enemy. The battlefield before him is littered with the butchered remains of Goblin. His great sword has sung a song of slaughter, and his armour plate is scarred and stained with his enemies’ blood. From out of the jungles steps a greater Orc of monstrous size, a double-bladed battle axe in its hands. Its nakedness uncovered. Its savagery evident. It swings its foot-long tusks back and forth as it roars an incoherent challenge. Gymir, Knight-captain of the brotherhood of the Order of Light, smiles, for there is joy in battle. There is no fear in his heart as he runs to give battle with the servants of the Dark Lord.

On top of building a world that you’ll not soon forget, Turner also develops characters that you can’t help but cheer on and worry for.  With danger around every corner, you’ll be anxious to see what comes next, and the story surprises throughout.  If you’re looking for a fantasy that feels fresh and exciting, and leaves plenty of room for exploration for future releases, you’ll love Turner’s debut.  Check out The Banner of the Broken Orc: The Call of the Darkness Saga: Book One on Amazon today!

One thought on “Fantasy Promo – The Banner of the Broken Orc: The Call of the Darkness Saga: Book One”