Howdy folks!  It’s been a rip-roaring week, and we’ve got just the way to end it for you.  We’ll be making one last stop in the Otherworld, this time to witness an epic fantasy in the making in the world of Kal Maran.  Take a look at the excellent first book in the Shattering of Kingdoms series, The Mercenary Code.

Emmet Moss is writing a love letter to some of the champions of fantasy with his powerful debut, The Mercenary Code (The Shattering of Kingdoms Book 1).  His sweeping epic may have some familiarity, but it’s the edges of the tapestry that are filled with interesting events, attractive locales, lore that readers will love investigating, and of course, compelling characters with great interactions.  The world of Kal Maran is expansive, and worth exploring, and Moss shows off many intriguing parts of it in this substantial book. 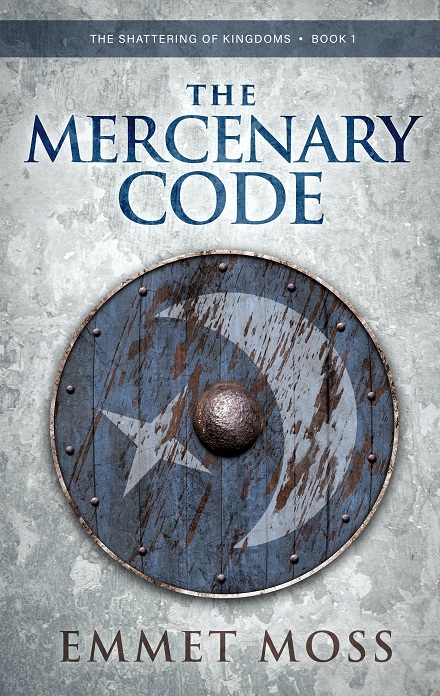 Break the Code. Shatter the World.

Centuries ago, the murder of a beloved king tore apart the Kingdom of Caledun. The land was plunged into chaos and thousands perished in the aftermath. A new order was established in an attempt to return Caledun to its former glory. It failed, but in its place rose the beginnings of the Code.

During this same period, the mystical caretakers of the Great Wood retreated from the world of Kal Maran, their disappearance an ominous harbinger of the suffering that was to follow. The Great Wood now grows out of control. Cities, towns, and villages have fallen before the relentless march of the forest. Without the former guardians to keep her tame, the wood has become a place of peril, and dark creatures of legend now hunt beneath its leaves.

The summer season is now a time of armed conflict. The fall of the old monarchy has brought about a ceaseless cycle of combat. Grievances are settled by the strict tenets of a binding Mercenary Code and the men who would die to preserve its honour.

However, change is in the air. Political rivalries have escalated, and dire rumblings of a revolution abound. Thrust to the forefront of the shattered land’s politics, a mercenary fights for more than just riches. In the north, a borderland soldier wrestles with his own demons and looks to find his true purpose. And in the shadow of the Great Wood, a young man’s chance encounter with a strange visitor gives hope to a land divided.

Those who enjoy returning to the same fantasy world again and again are in luck.  Moss has just released the third book in the series, with the fourth on the way in 2021.  Better yet, the author has further plans to write more adventures in the world of Kal Maran.  Readers who are fans of persistent fantasy worlds will have much to look forward to.  In the meantime, gather up this first book before you pick up its sequels.  Check out The Mercenary Code (The Shattering of Kingdoms Book 1) on Amazon today!