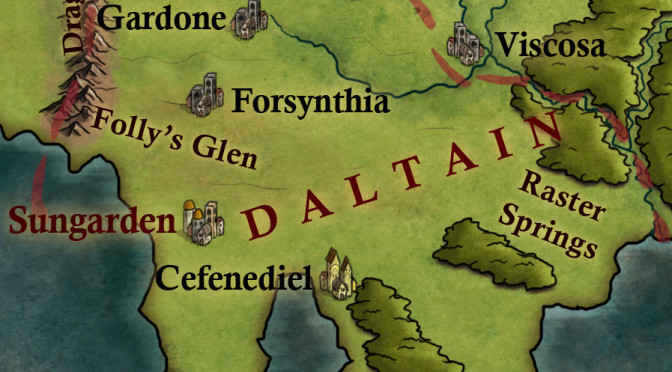 For a long while, Daltain was considered merely a portion of Raleigh.  However, a wealthy buyer named Dalton Blackshire was willing to lead a group of hardworking individuals and families, and purchased a relatively large plot of land in southwestern Draconis from the leaders of Raleigh.  Ever self-important, Blackshire named the fledgling country after himself.

Daltain is bordered by mountains on its west side, and the ocean to its south.  It also shares a border with Raleigh on its northeast.

Typically, weather that affects Raleigh is known to inhabit Daltain as well.  The winter months are not as taxing, though, as Daltain is farther south, closer to Tellest’s equator.

Daltain’s borders expand into the mountains, where they are carved into tunnels for certain inhabitants and citizens.  There is a small expanse of desert that stretches through Raleigh and into Daltain, but many travelers avoid it, as rumors of terrible beasts living within it persist.  Blackshire was a savvy buyer in that he correctly devised the area in the desert where Raleigh’s ghastly deathwinds would cease to blow.  He purchased the desert land there at a very meager price.

A dense forest sits relatively close to the ocean in the southeastern portion of the country.  There are a multitude of caves that lead into tall hills and small mountains in the western side of these woods.  In the center of Daltain, a river splits the country in half vertically.  A great wall stretches horizontally, splitting it that way as well.

Just like Raleigh, the ecology is not specific to Daltain.  There is an abundance of wildlife, however, as respect for nature is much more prevalent in that country than almost any of the others of Draconis.

Despite the purely financial prospects of Blackshire’s purchase of Daltain, over time, the land has prospered.  Typically, no race is outright ostracized, and in fact even some of the less hospitable races have found solace within the country.  That said, the majority is made up of humans, dwarves, elves, gnomes, minotaurs and werewolves.

Humans can be found just about everywhere, from the towns of Forsynthia and Sungarden to the White Keep of Gardone.  Dwarves often share the locations with their human allies, but they also maintain a strong presence wherever there are mountains.

The elves, while plentiful in the south, do not mingle very much with any of the other races.  Rather, they do their best to protect the forest kingdom of Cefenediel, and the magical Cordus trees that grow there.

Gnomes typically have free roam of the country, but they can be found most often with the dwarves, in an effort to study the earth and its properties.  To that point, the minotaurs also can be found with the dwarves, yet they prefer a more open living situation.  To some, it can appear that the minotaurs are the first line of defense for the dwarven clans.  They also have a strong presence in their capital city of Caledos.

The werewolves escaped from Gandarst many years earlier, and settled in southern and eastern Daltain.  Of course, because of their proximity to Warus, this has led some to speculate that the werewolves are just ragged kobolds.  This is not the case, however. 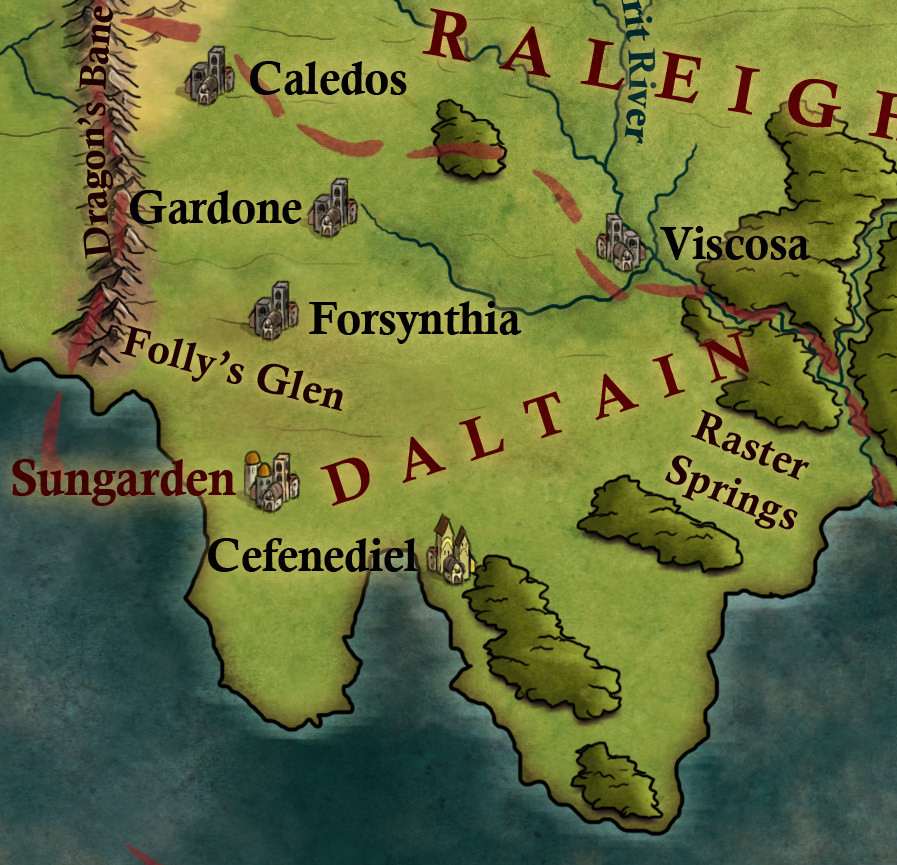 Dalton Blackshire was nothing if not a prodigiously diplomatic man.  Upon his purchase of the large plot of land in southern Draconis, he offered his hand and opened his doors to clever scholars and alchemists and sturdy laborers and craftsmen.  The gnomes and dwarves were ultimately the best fit for his plans of grandeur.

Of course, his scheme was most notably stretched to fit the advent of a new human empire, and his own brethren were at the forefront of the influx of civilization in the newly heralded country.

In the meantime, the elves quietly remained in their kingdom to the south.  The elven queen, Tarenda, bowed her head and allowed the human, dwarven and gnome civilizations to thrive beyond the borders of their forest.

The humans began building settlements outside of the mountains, drawing borders across the land and thrusting their flags in the ground.   Blackshire himself colonized a city called Sungarden in the southwestern portion of the country.  The wealthy capital of Daltain overlooks the southern seas, and much to the dismay of the country’s people, has maintained the miserly ways of the nation’s founder.

Other places in the country worthy of note were the city of Forsynthia, which opened its arms to students of the Arcane Arts.  Forsynthia is situated centrally in an area surrounded by places that have been touched by the aether.  To its west, Folly’s Glen is the site of the great magewar.  To its south, the elven kingdom of Cefenediel continues to flourish.  The magical Raster Springs are nearby as well.

North of the city, the White Knights of Gardone patrol the country, and keep it safe from evil.

Meanwhile, the dwarves make inroads into the western border of the country, developing deep burrows into the mountains.  Perhaps the most widely known of these underground communities is the Crissagelym, populated by the Fire Eye dwarves.  They have been arduously working at protecting Daltain from the advance of the creatures from the underworld.  It is said that their anvil was forged with the blood of demons that the dwarves cast out of their subterranean home.

The gnomes are also inhabitants of their tunnels, continuing their experiments.  They mostly entertain the discovery of newer and better alchemical practices, but they are also known to further the advent of dwarven machinery, specifically aiding them in boring the tunnels beneath Crissagelym.

Over the course of time, Daltain became one of the more peaceful nations on Draconis while other wars were bloodying the shores of Ippius and the mountains of Gandarst.  Extending open arms and hospitality, Daltain aided those needing refuge.

Due to racial tensions in the archipelago of Ippius, minotaurs were the first to accept the offer of a safe haven.  Humans, gnomes and even elves of southern Daltain helped the minotaurs to make their sojourn.  Their tribal, earth-loving ways had the minotaurs settling close to the dwarves, who have become a steadfast ally to them, allowing them to grow.

While this was occurring, the dwarves were assisting the werewolves from Gandarst who were displaced by the barbarian hordes.  Their exodus carried them to the eastern side of the country, where they protect Daltain from the creatures of the night that threaten from the marshes there.