Hey there folks!  How long has it been since a cover reveal?  If you answered “too long” you’re absolutely right!  I mean, really, it’s only been about a month, but with nine new Tellest books coming your way in the next two years or so, we need to get on the reveal train pretty quick, huh?

So let’s get right down to business then, shall we?  We’ve already shown you work from Lord of Thunder and Transformed, so it stands to reason that we should show you the next sequel in our Tellest Legends collection.

Arise is the follow-up to the very well-received Awake.  Where we looked at psychology in a fantasy world with the first book in this series, with dreams, guilt, post traumatic stress and so on, in Arise, we knew we needed to raise the bar somewhat.  With Venathryn cured of the dreamplague, we needed a new challenge for Maravek in the follow up.  He and Vandelas head to Versali-Virai, a land far away, to help the people there with an even greater threat that comes when they should be slumbering.

Here’s how we started piecing together the cover:

The first thing you’ll likely notice is just how busy the cover is.  There is a lot going on in this story.  It’ll be fighting with The Fall for the biggest cast, I’m sure.  Whereas Awake focused on just two characters (and only one on the cover), we have a quartet of powered individuals that grace the cover of Arise.

We opted to go with this variant of the original sketch, because it gives a more gloomy, monstrous feel.  Our characters are in for a pretty decent fight on account of the mob of villagers, the spell being enacted on the minotaur statue and the shadow creature in the back there.

Here, the landscape is put together a lot more.  Leo did a beautiful job bringing Versali-Virai to life in one of its darkest hours.  You can see the bazaar in the background there, and the gorgeous architecture even further in the distance.

The minotaur also gets a fresher coat of paint, and it makes him look plenty imposing.  It’s still coming together at this point though. 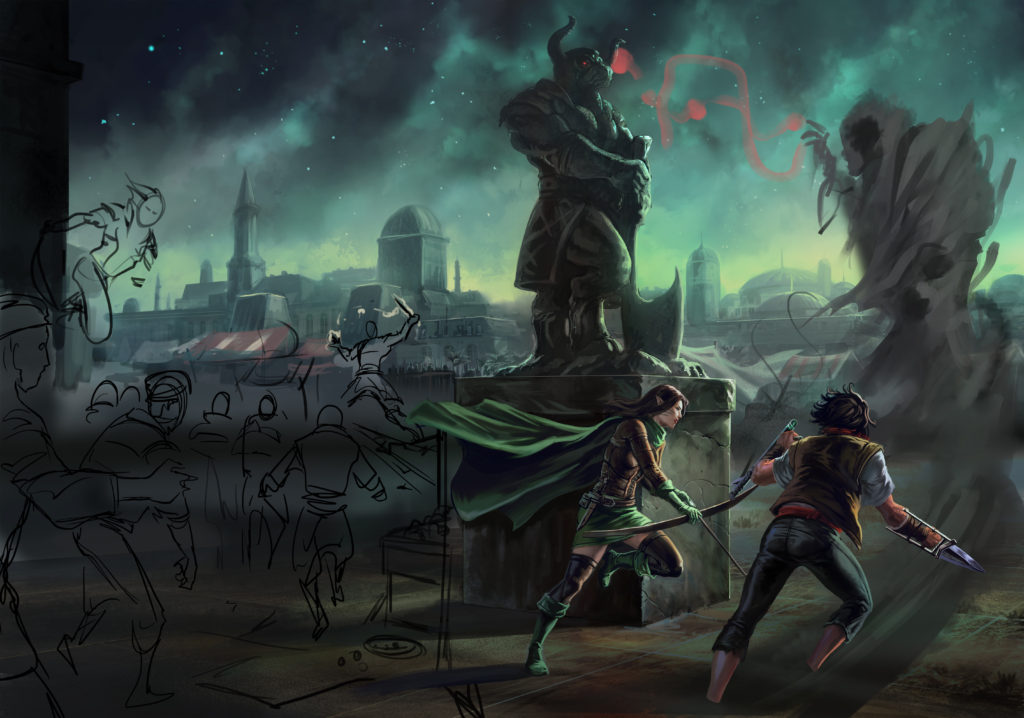 Two of our leads are fully realized at this point—well, except for Maravek’s feet.  There’s a good reason for that though!  Joining him on the front cover is Venathryn, our hero from the first book.  She went over so well for so many people, we had to figure out a way to get her involved, and we pulled some pretty cool strings to get everything working the right way. 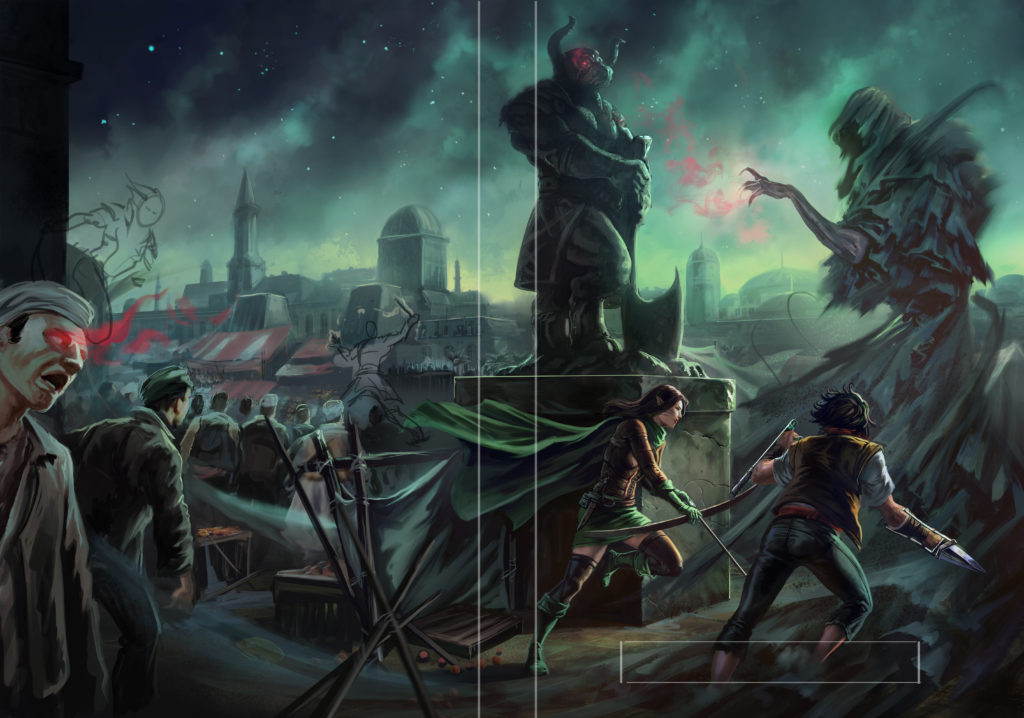 Both the crowd and the looming shadow are given some badass new looks here.  There’s a lot of that red magic floating around, so you can see that this locale is a bit more dangerous than a few goblins in a forest.

We’re almost to the end here.  Our other two leads, Vandelas and Faradorn, grace the back of our cover.  Vandelas was introduced in Awake as another elf in Venathryn’s sect, while Faradorn was introduced in the short story The City of Light and Darkness. 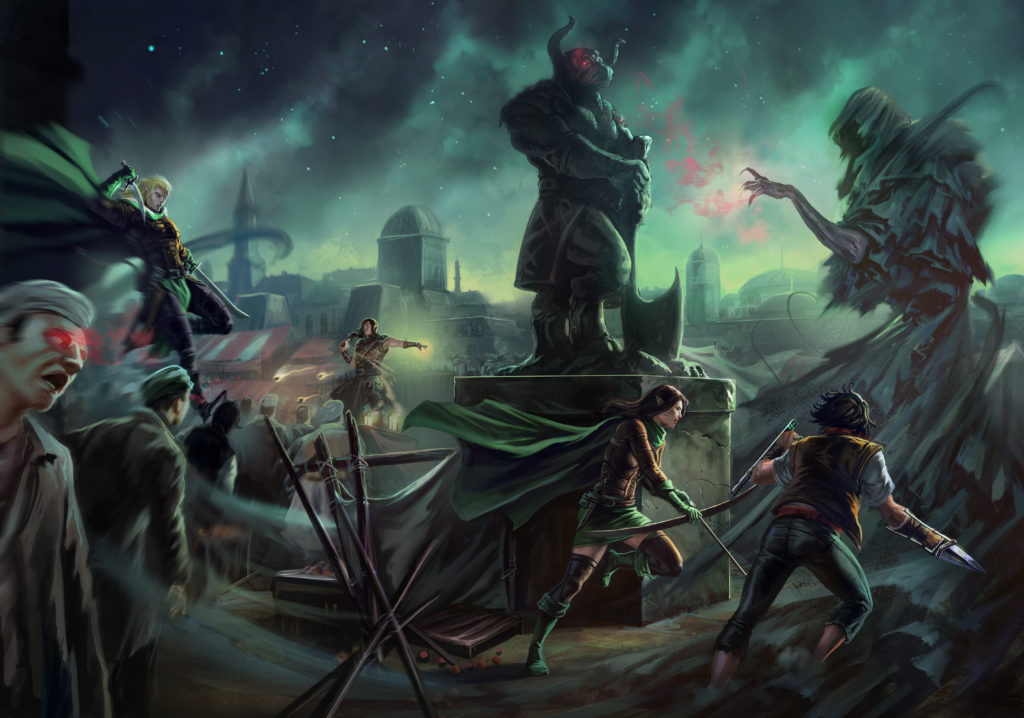 We had one huge change to make here.  With his grey hair, Vandelas looked a little too much like Geralt of Rivia (a favorite of Leo’s, mind you).  We gave him a blond main that made him look a little more like a classic elf instead. 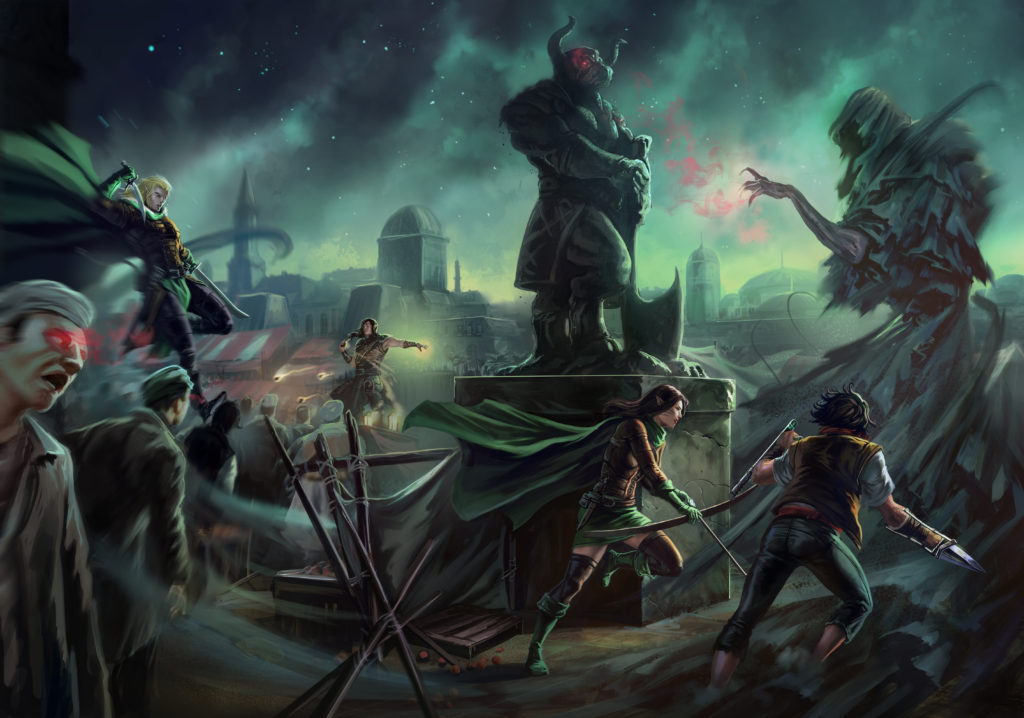 Here you have it, our final piece.  There were only a few more changes here—some lighting and texture shifts, but it’s important! Also, I forgot to mention it earlier, but you can see why Maravek’s feet weren’t finished.  He’s obscured by the shadow of that frightening creature in the back there.

That’s about it for now, but we’ve got another gorgeous cover coming your way in about three weeks.  You can’t say that Leo wasn’t prolific!