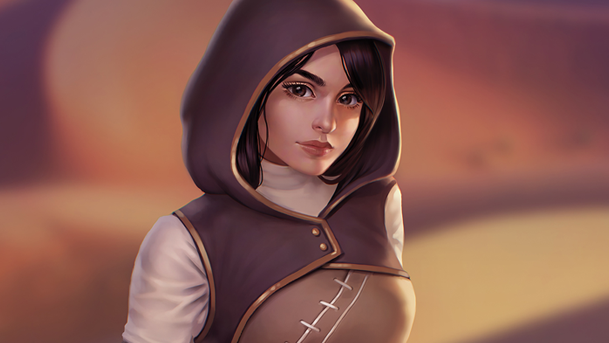 Hey there folks.  We’ve been spending a lot of time showing off established characters and adventurers who are going to venture into the Living Dungeon from the many different realms of Tellest.  But every now and again, we have to look to the future of the Tellest franchise for some sneak peeks at what is on the horizon.  Today, you’re going to get a little taste of what’s to come with a new story and a new character. 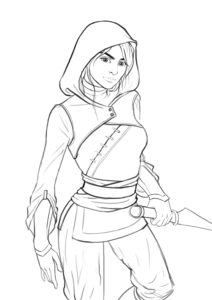 Nadia lives in Saveon, the same continent that our kaja dragonspeaker Kaiyonani calls home.  The continent is marred by a lot of desert, and they’re probably on different sides of it, so thus far, the chances of them meeting is pretty slim.

For Nadia and the people of her village, life can be pretty oppressive.  Food is scarce and hard to come by, and the only way to properly care for the village is to send caravans out to other establishments to trade.  One thing that her village does have is stone and metal.

Nadia is a bit of a tomboy, and as she’s growing older, she wants to join up with the caravans as a scout.  She’s a quick runner, and she’s got impressive stamina, so she knows she’d be a great asset for the team.  There’s one problem: her culture isn’t exactly warm and welcoming to women.  Her father isn’t a fan of her tomboy antics, and thinks her actions are somewhat inappropriate, so he sends her off to a nearby temple to become a sister of the covenant and work to appease a local deity, much to her chagrin.

Without giving away too much, Nadia discovers powers within her during her time spent at the temple, and takes on a new identity: The Desert Wraith.  It’s still too soon to talk about her story at greater lengths, but I hope you’ve enjoyed this sneak peek at one of our newest characters!