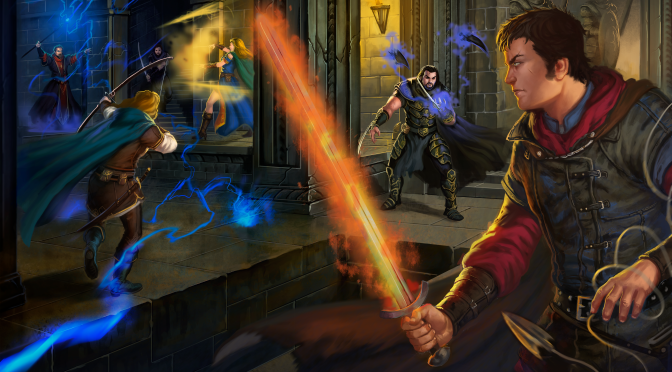 You know, technically this is the grand reveal of the new The Bindings of Fate cover!

This is going to be a pretty massive post, because Leo and I never worked harder than we did on this incredible cover here.  There was so much back and forth, and I felt it was important to get the protagonist just right.

When we were successful with the Kickstarter campaign, we managed to nab a stretch goal that would see us updating all of our older titles (that being the original trilogy).  Though The Bindings of Fate already has a half cover on the ‘zon, we knew we needed a full cover when we were ready to go to paperback.  Here was our process: 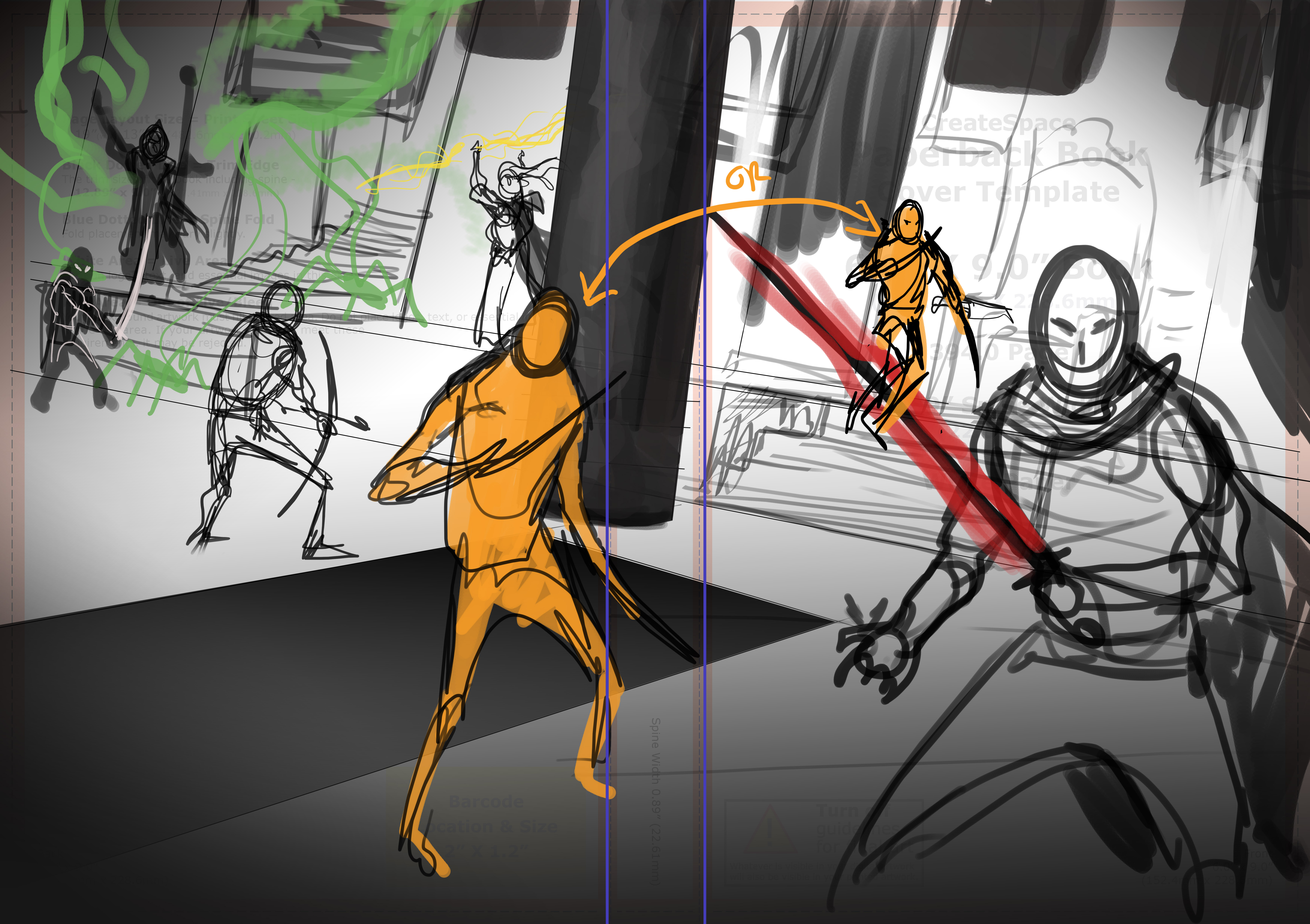 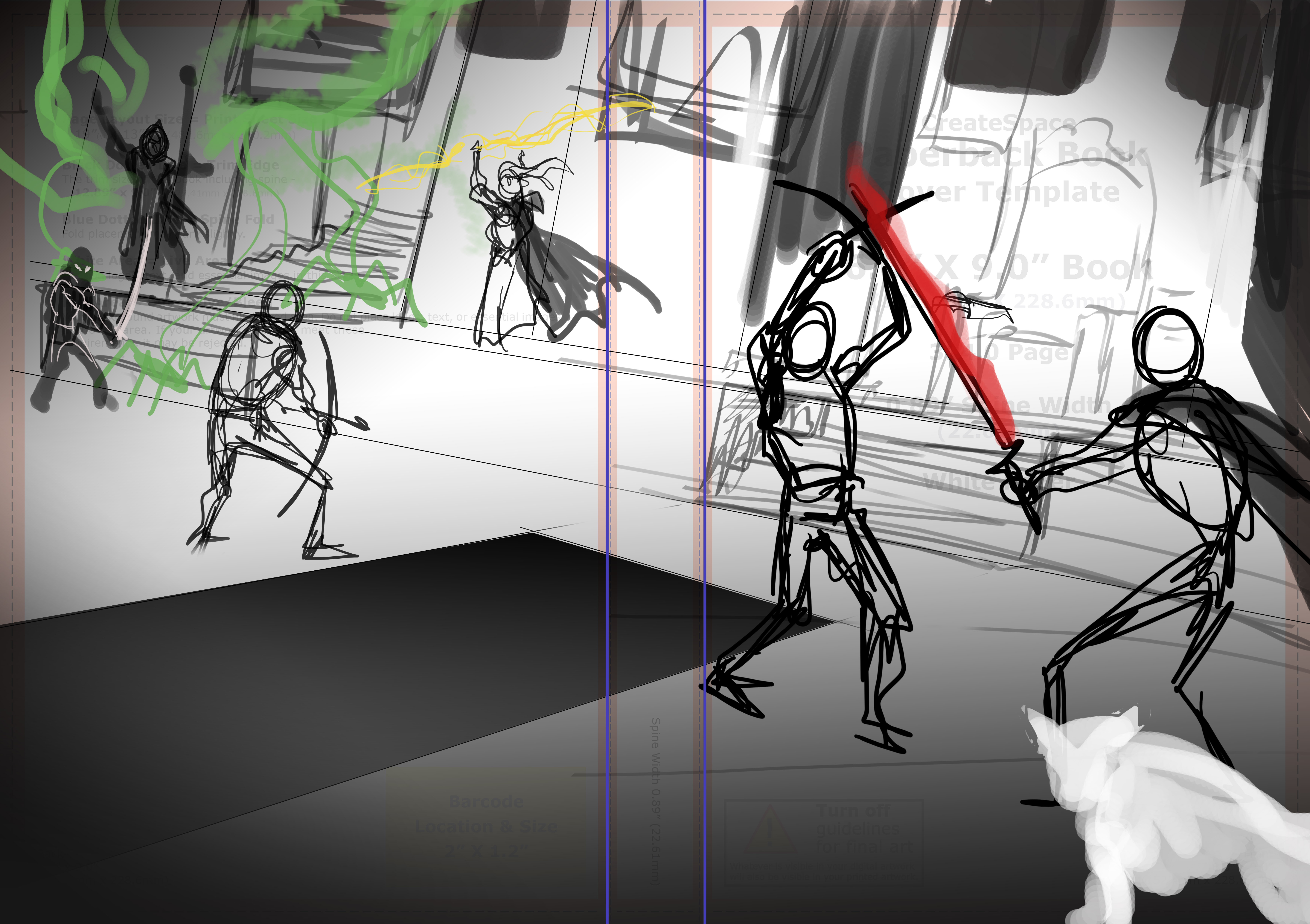 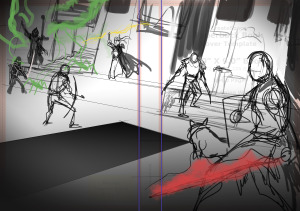 As you can see, we came up with a basic concept for what we wanted on the front cover.  This has been the front cover that’s been on my brain since I wrote the book, I just didn’t have the means to make the version I wanted to with my limited skills.  Leo managed to take what I had in my head like Dumbledore did to Harry in that one movie with the wizards.

If you’ll notice, the background doesn’t change at all.  We knew what we were going for as it pertains to all the players in back – it was the foreground and front cover that needed the most love.

The top two were the runners-up.  The first one was easy to discard, just because I didn’t like the idea of our hero looking straight at the reader.  That, and the antagonist – Raithly in this instance – teleporting to the back cover seemed a little jarring.

Our second choice was a little more dynamic, and most likely would have made the cut were our winner not so spectacular.  It features Kaos doing battle with Essex, and had the bonus of having Dirk in the foreground as well.

But that third one put Kaos in the spotlight, with Essex in the background.  It would have featured Dirk more prominently as well, but the final picture didn’t end up like that.  You’ll see the changes we made as things continued along.

Here, you can see the progress we began making.  At first, Leo did some magic on the whole piece.  The characters had more life, and you could really distinguish who was who in these particular sketches.  Steel Tip, Juramentado, Raithly and Adelia are preparing to do battle in the fight for their lives.

Kaos and Essex, too, are coming together, including the layout of the equipment and the armor.  Dirk is still an amorphous blob, but it looks wholly promising.  Even the locale itself seems so full of life here! 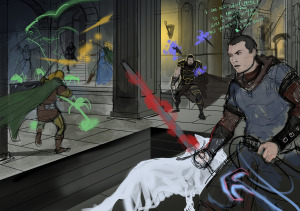 And here is where things are beginning to look spectacular.  The back is almost entirely done at this point, and the characters seem fully realized.  The castle has textures and lighting effects, and even the front of the cover has a background that really pops.

The only thing that really needs to be adjusted at all are the characters that we’re going to be focusing on in the book. 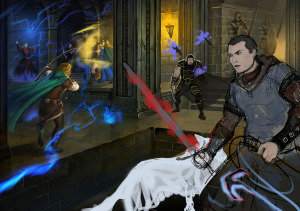 The cover really came together in that next step, but some sacrifices had to be made.  Dirk just didn’t fit into the overall picture, and we had to make a very difficult cut with that in mind.  Kaos and Essex, meanwhile, made some astonishing progress, including the display of Wildfire and the Sky Talon.

Of course, things just weren’t quite perfect yet, and we needed to rectify those things.  For one, there was a little too much Jack Black to our hero.  He looks a little bit too much like a hobbit in this variation, and Kaos is old enough and fit enough here where he shouldn’t have had as round a face as he did. 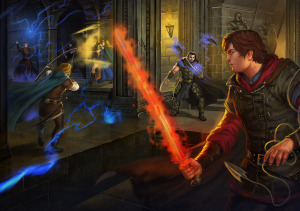 Leo proceeded to age him up and skinny him down a bit, and you can also see that the saturation was brought down a little bit.  I’m usually very flexible with these covers, and I think that Leo did a great job with it, as he always does, but I wanted to perfect it. 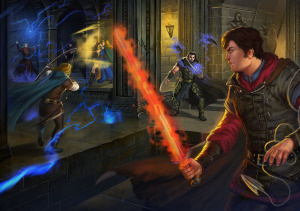 I had to bring in help, in the form of Rhianna.  You can see, here, the steps we took to alter him sufficiently, and give him the look we were ultimately going for.

The first thing we needed to do was dial back his jawline a bit.  He was still a little pudgy, which isn’t necessarily bad, but it wasn’t the view we were expecting to put out. 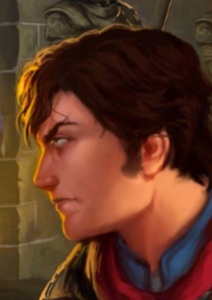 After that, we knew that we wanted to tighten the lips, raise the hairline and shrink the nose just a bit. 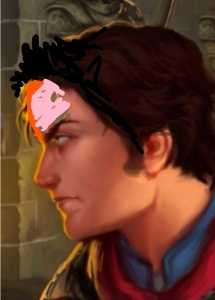 Here, you can see the difference from the original version to the variations we made.  And here’s a fun fact: all those changes that Rhianna made?  They were from her iPhone. 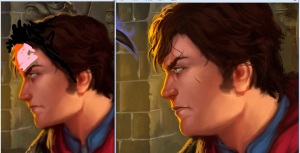 Leo was great about making those alterations, and before long, we had our finished cover.  With almost no more fanfare, I give you the completed piece for The Bindings of Fate: 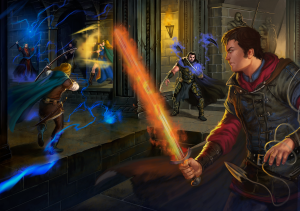 I’m incredibly happy with all the work that was put in here.  While we’ve always had our artists cranking out impressive cover after impressive cover, this one took a lot of effort, a lot of creative input, and it came out on the other side looking so darn good.