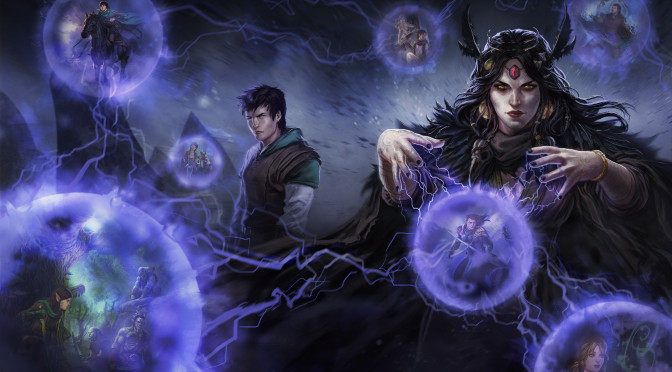 I am so very excited to show you the last big component of our Tales of Tellest: Volume one push.  I know it should have been a one year enterprise, but the Tales of Tellest grew a little out of control, and I can honestly say it was probably for the best.  You know when you’re expanding, you get those growing pains.  I think the same happens with a series and a world like Tellest, and the delays here and there made it possible to sort of age with dignity.  It gave us the time to really tackle things with the kind of poise and attention that we needed to give them.

There were a lot of ways that we could have gone at this particular cover, which brings all the stories we’ve created in the last 18 months into one package.  We could have had a series of characters all bunched together into one space, but as of stories that are in this collection, they haven’t actually met each other.  It would be disingenuous to put them all together if they’re introductions wouldn’t be made for several years.  So Leo and I determined that there would have to another thread that tied them all together.

That’s how The Keeper of the Void, the final story I’ve written for this collection, came to be. 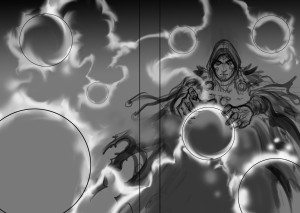 In Tellest, there are some things that are a bit beyond the existential. We’ve seen the Nexus, which connects the waking world with the afterlife, in addition to serving as a means for the gods to travel about the world in short bursts.  What we decided to do was add another layer of impossible to the world.  Whereas the Nexus affects space and mortality, the Void encompasses space and time.

Yes, time travel is a part of Tellest now.  In a lot of ways, it always was.  But we’ll get to that more later.  You can see that draft of the cover up there.  That’s the one we passed on.  We gave Leo the opportunity to create a character from scratch here, and he gave us two versions of a kind of “mad wizard” or “mad crone” to choose from.  We ultimately settled on our crone: 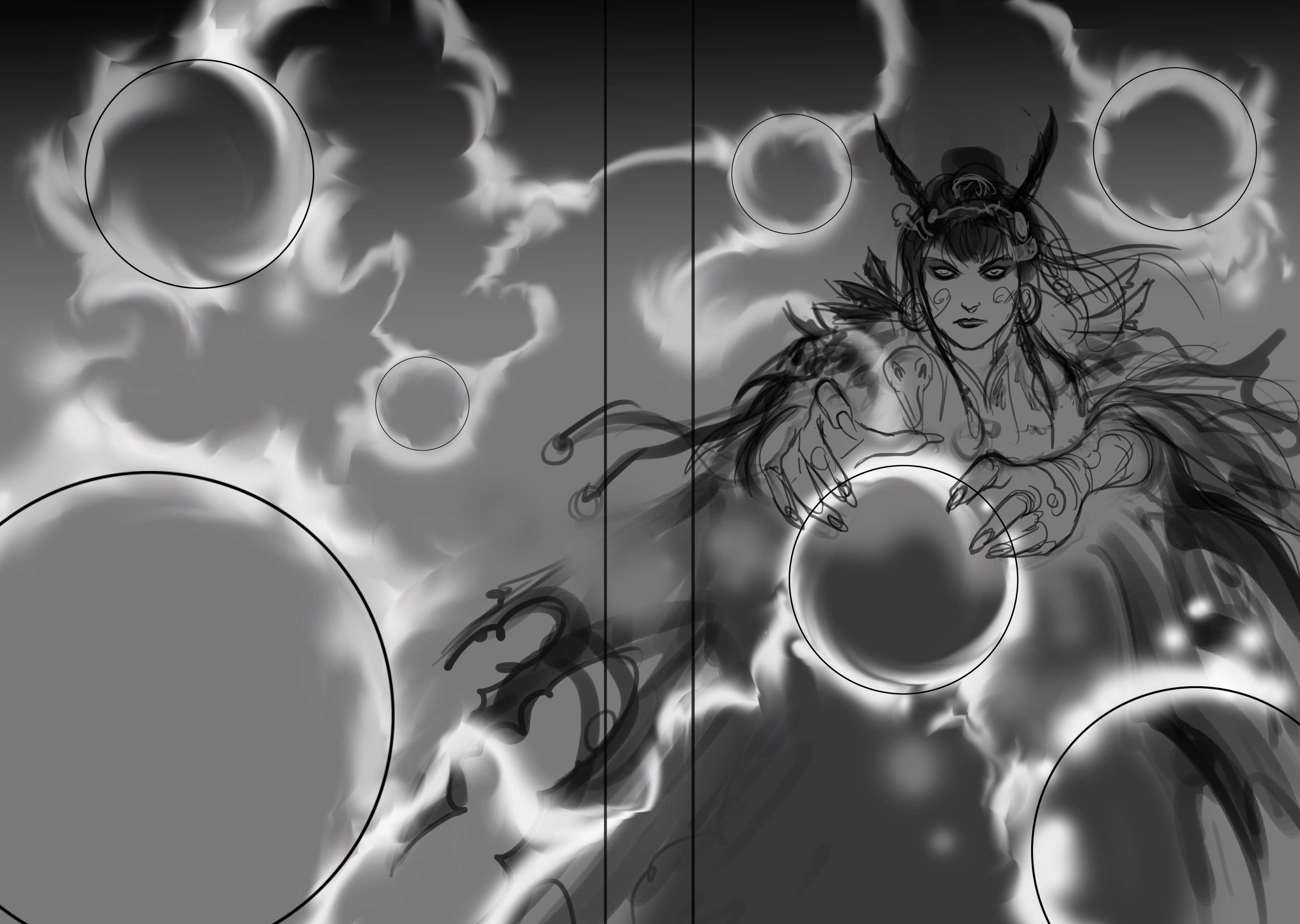 This is Nyrshia, the eponymous Keeper of the Void.  She’s not really female, but beyond the comprehension of mere mortals.  She (it?) chooses to represent itself the way it does so that she can interact with us on a level that we would understand.

You can also see the orbs in the cover as well.  These are the ways that we’ve bound all our previous stories together. 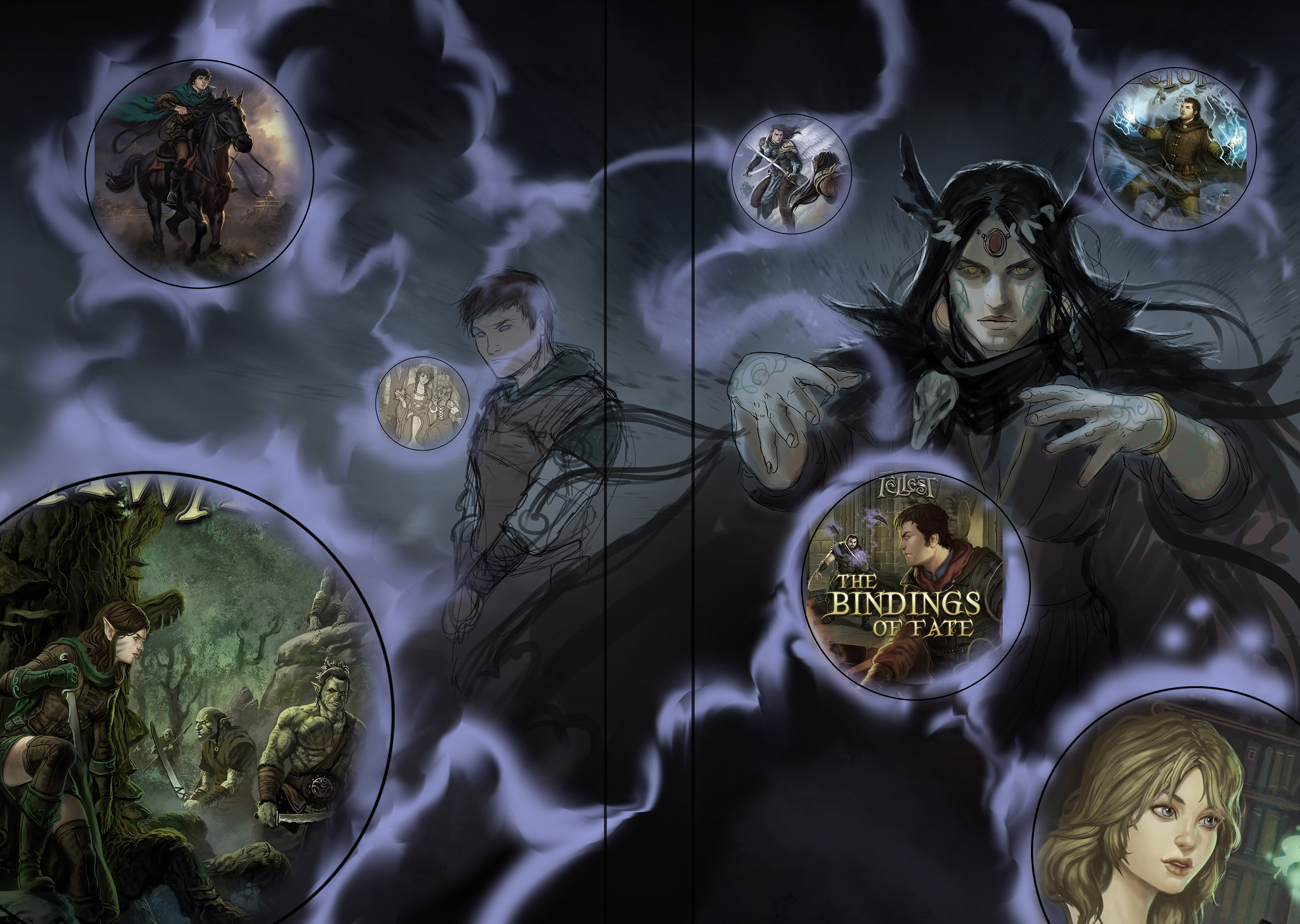 Here, you can see that idea beginning to take shape.  Since time is all relative, events sort of float around in the Void, ready to be observed—but rarely manipulated.

In this version of the cover, Nyrshia has been fleshed out a little bit more, and we’ve added the other big character to the story, a lad named Rhys who is a capable soldier that happens upon the Void.

The orbs are filled, as well, with the covers of the stories that we’ve written before.  You’ll see that The Bindings of Fate is in there as well, though it doesn’t fit in the Tales of Tellest collection—if we threw that in there, we’d have to put the other Child of the Stars trilogy books in there, and we’d be looking at around 1,800 pages worth of content, and this collection is supposed to go to paperback! 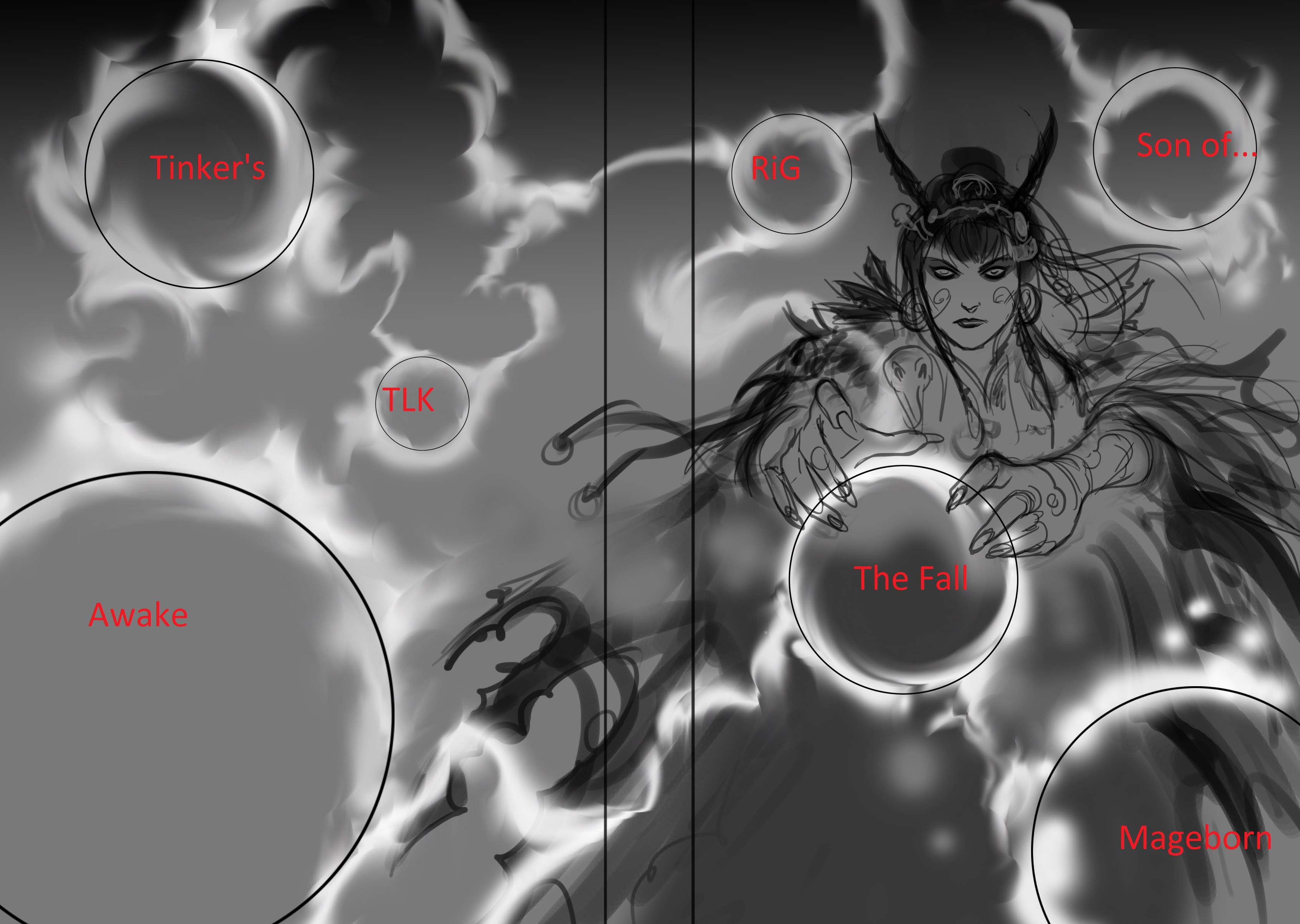 We took a step back to our monochrome cover just so that we could indicate which stories should have gone where.  We kept our most popular stories in the biggest bubbles, and eagerly awaited the unfolding of Leo’s own brand of magic. 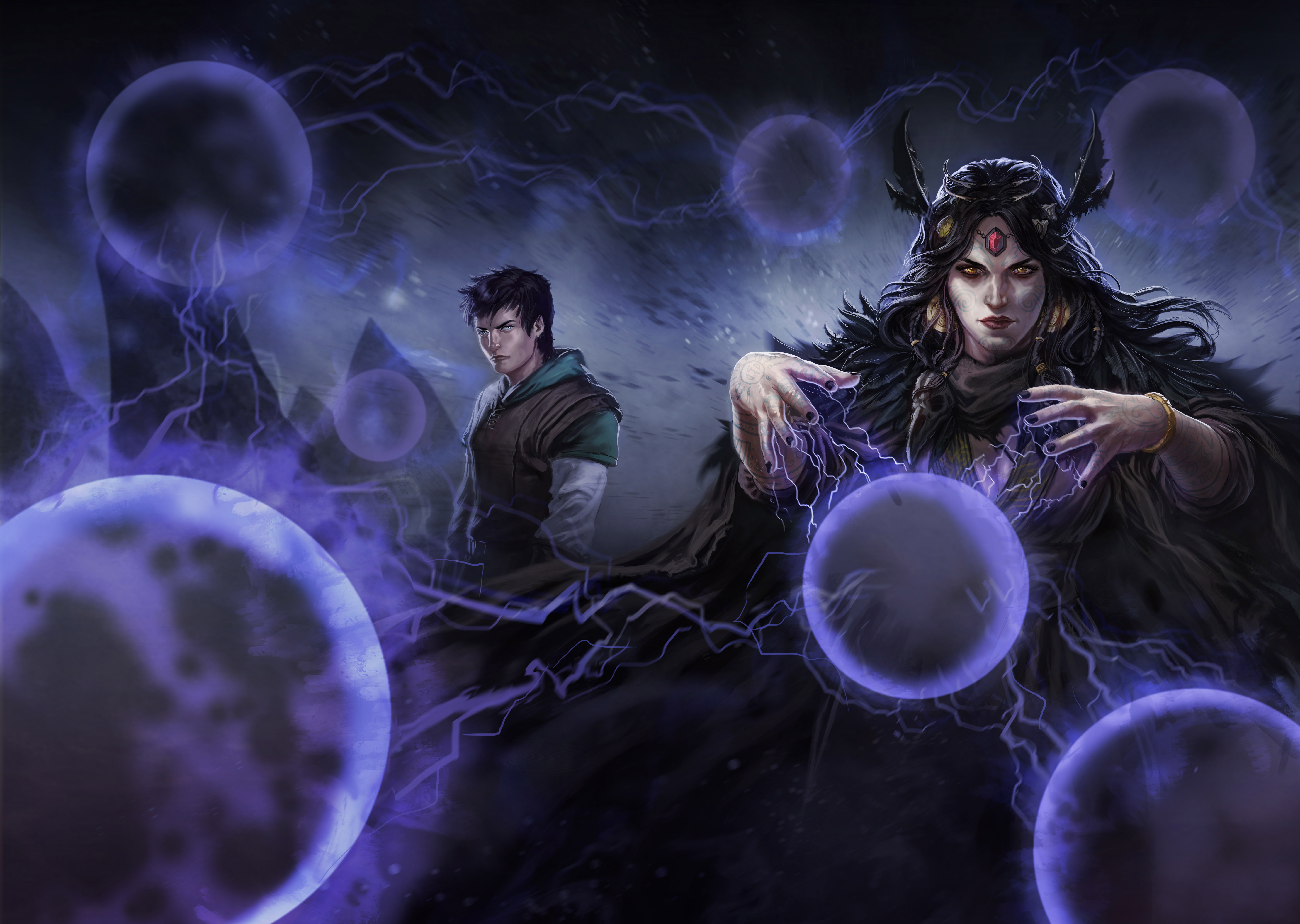 This was the finished version of the cover, sans filled orbs.  Nyrshia is a bit more imposing in her finished form.  Leo captured the look of this character so exquisitely as someone who could be so disarmingly fragile but so powerful to behold at the same time. Rhys, meanwhile, looks a bit more brooding. 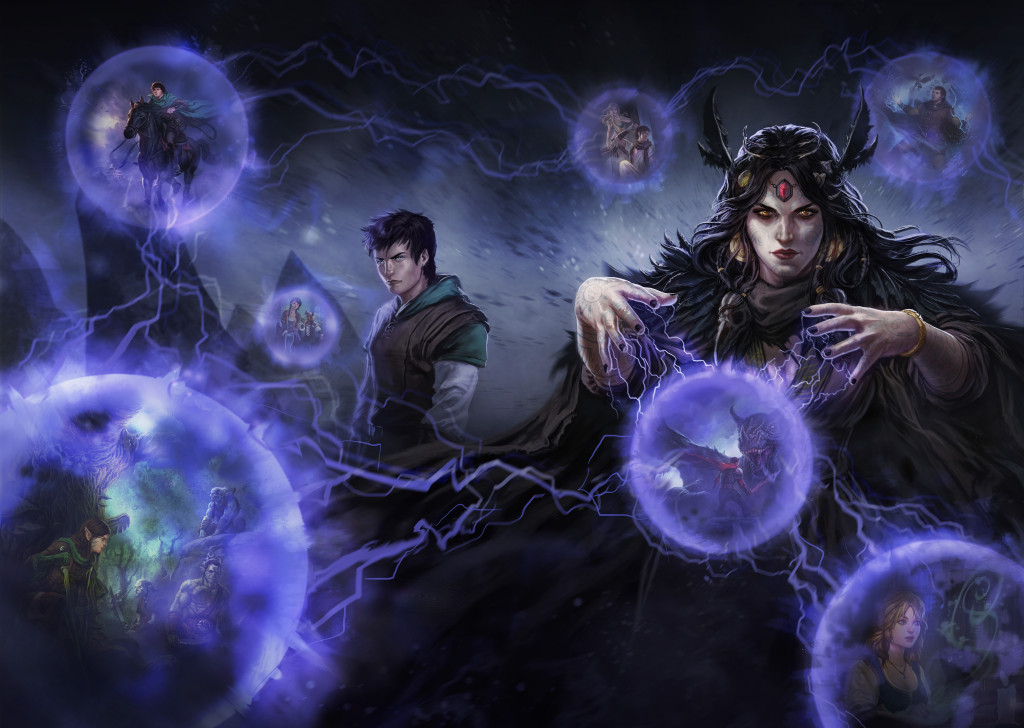 Now this is some beautiful work.  The orbs are being used in their entirety here to great effects.  And the stories inside them? Magnifique.  You can also see that Leo did some redraws of some of Kimirra’s older story covers for The Littlest Kobold and Remembered in Gold.  We thought that they didn’t quite stand up to the rest of the thumbnails on this cover, and asked Leo to spruce them up a bit.

Funny enough, we still have some times translating between Leo and I from time to time.  It’s very far and few between and he does some quick turnarounds, but you can see here that we accidentally used As Darkness Falls instead of The Fall.  You can tell that I have too many opportunities to use that word, especially when you consider that another short story in this very collection is called Fallen. 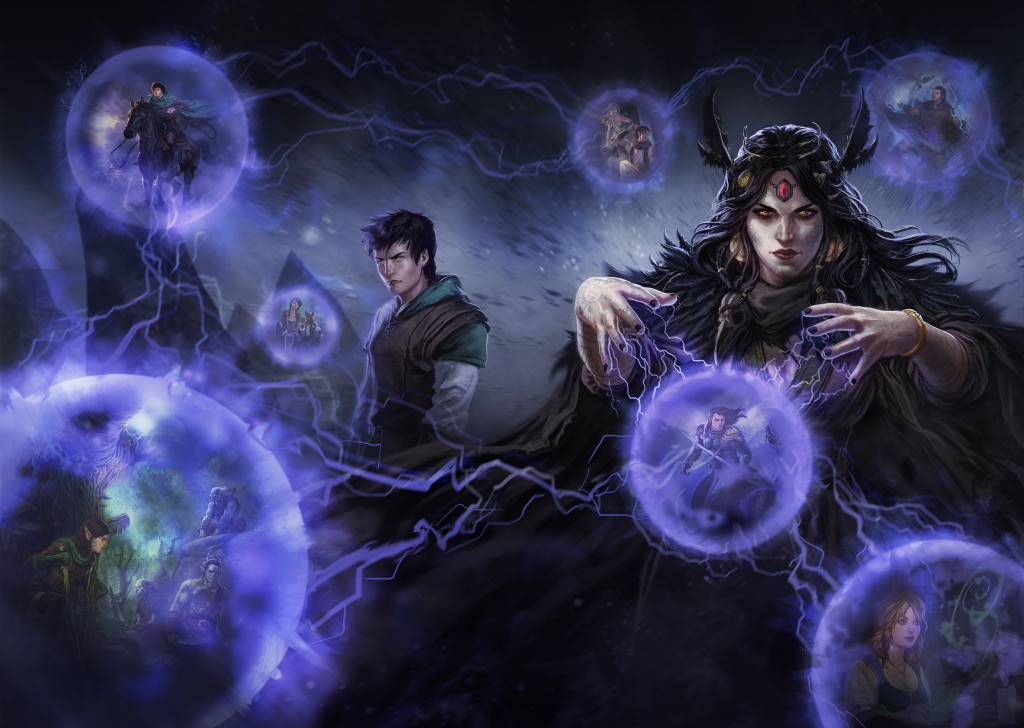 And here you have it.  The final version of our final 2014-2015 project.  Obviously we have to slap the title and back matter on there, and are working with Paul Davies to do so, but this is the Tales of Tellest in all its glory.  We hope you liked it, and we’ll come back at you with more great content in the weeks and months to come!

Like Loading...
|  Tags: Awake, Keeper of the Void, Mageborn, Son of the Storm, Tales of Tellest, The Fall, The Tinker's Tale