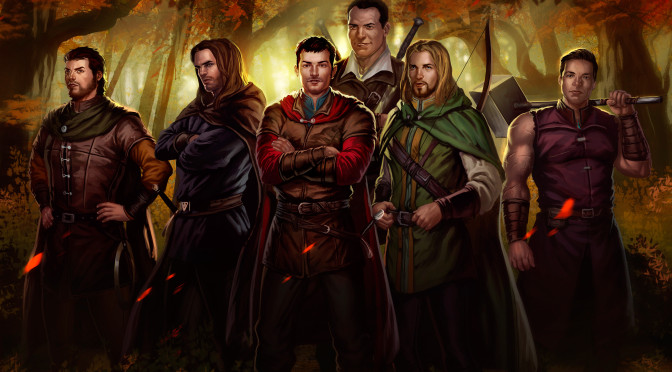 This is the final bit of the wedding related artworks that you’ll see from us!  I know, it’s very sad, but everything about our wedding was glorious.  There was only the tiniest bit of drama, and it doesn’t stand up at all to how amazing the whole experience was.  So don’t fret… just enjoy this latest piece of artwork.

One of the things that I wanted to do was make sure my groomsmen felt very appreciated.  They took me on an awesome bachelor party (white water rafting, could not be happier), and they all did a great job helping out the day of the wedding.

One of the things that I got them was a personalized flight paddle and beer glasses so that they had something practical (and a little nod to the rafting trip).  But I also wanted to show these guys how I see them.  They’re all heroes in their own way, and they’ve inspired me in ways that the don’t even know.  With that in mind, we ended up going to work trying to get a cool portrait done with the Tellest characters that they helped me to create over the years.

My initial aim was to try and get RedPear, who has always done an awesome job with the characters, to do this ensemble piece. Unfortunately, because of school related work, we were unable to collaborate.  She sent me to her friend Yanisaran though, who I’m happy to say took me up on the offer.

The first thing to make sure we had down was the way Eclipse looked.  He was a character who was only briefly seen in The Bindings of Fate, but began to play a big part in the second book an onward. Yanisaran took the references shot that I gave her and put together a decent sketch of the character: 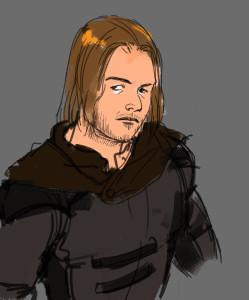 After that, it was time to put together the sketches of the full piece. 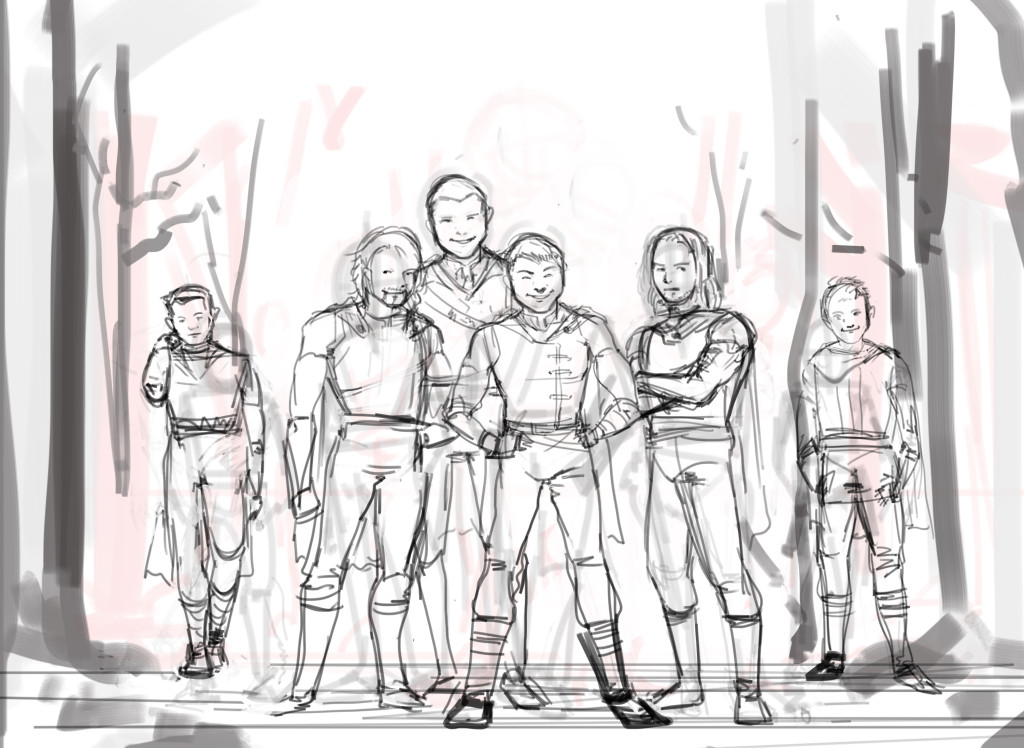 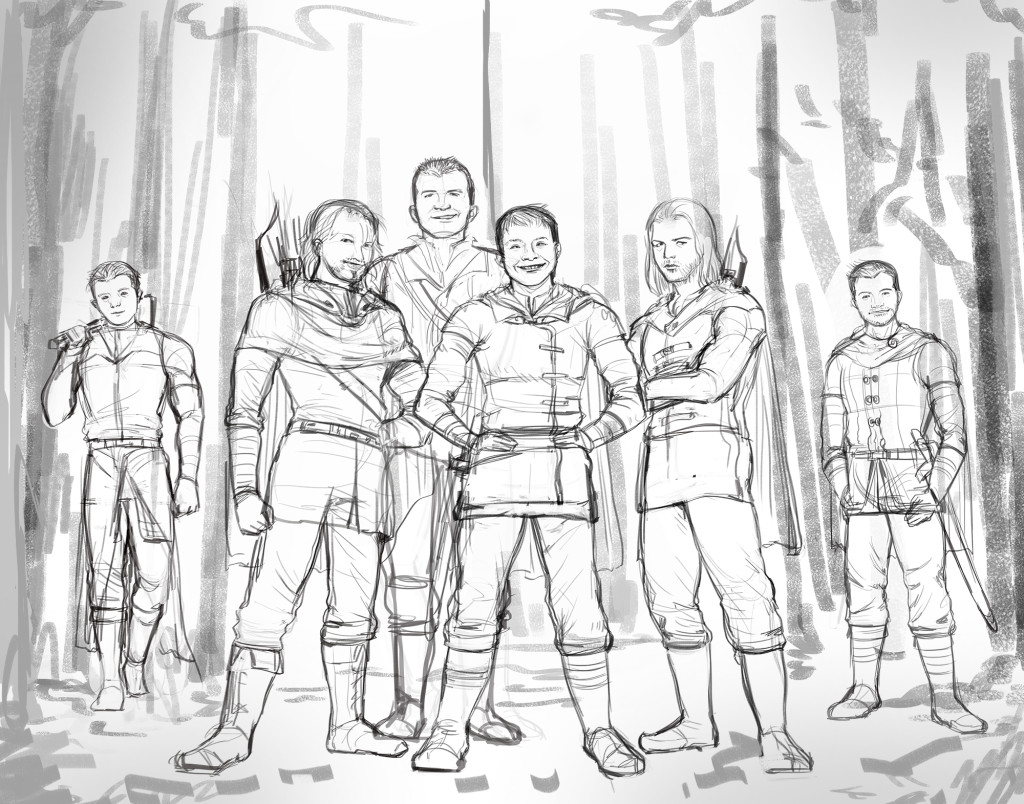 As it grew, we were able to determine more of what it was going to end up looking like.  One of the problems with some of these initial sketches is that you don’t necessarily know what’s open to interpretation sometimes, and what is aiming at going toward the final piece. 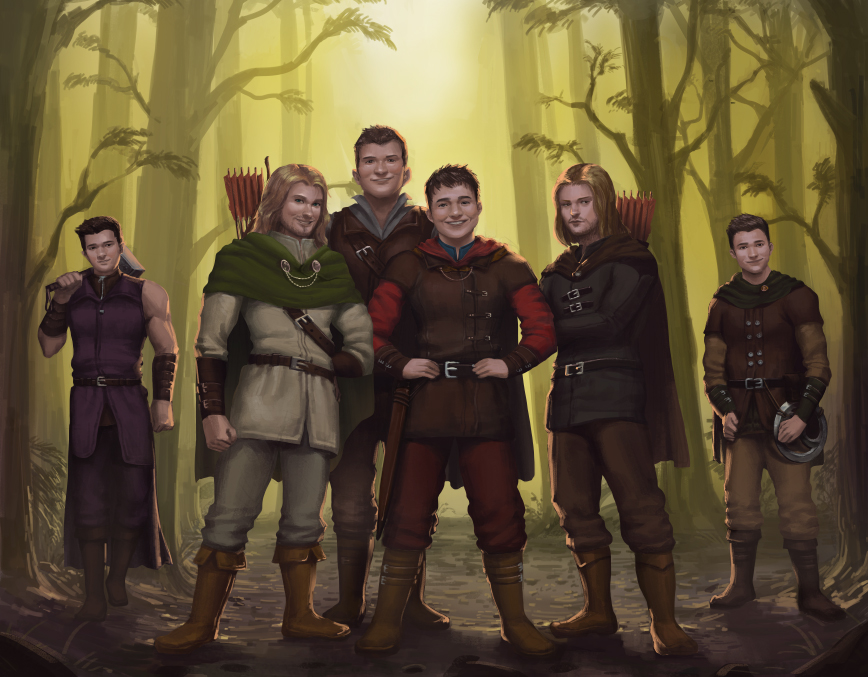 The outfits and everything ended up looking really, really cool, but you’ll notice that the characters didn’t quite end up looking like their counterparts in the other art that we had commissioned.  Yanisaran did an awesome job, but the characters looked a bit too young for the roles they were trying to fulfill.  Knowing that she didn’t have the time for any sweeping changes, I made an 11th hour, Hail Mary pass to Leo. 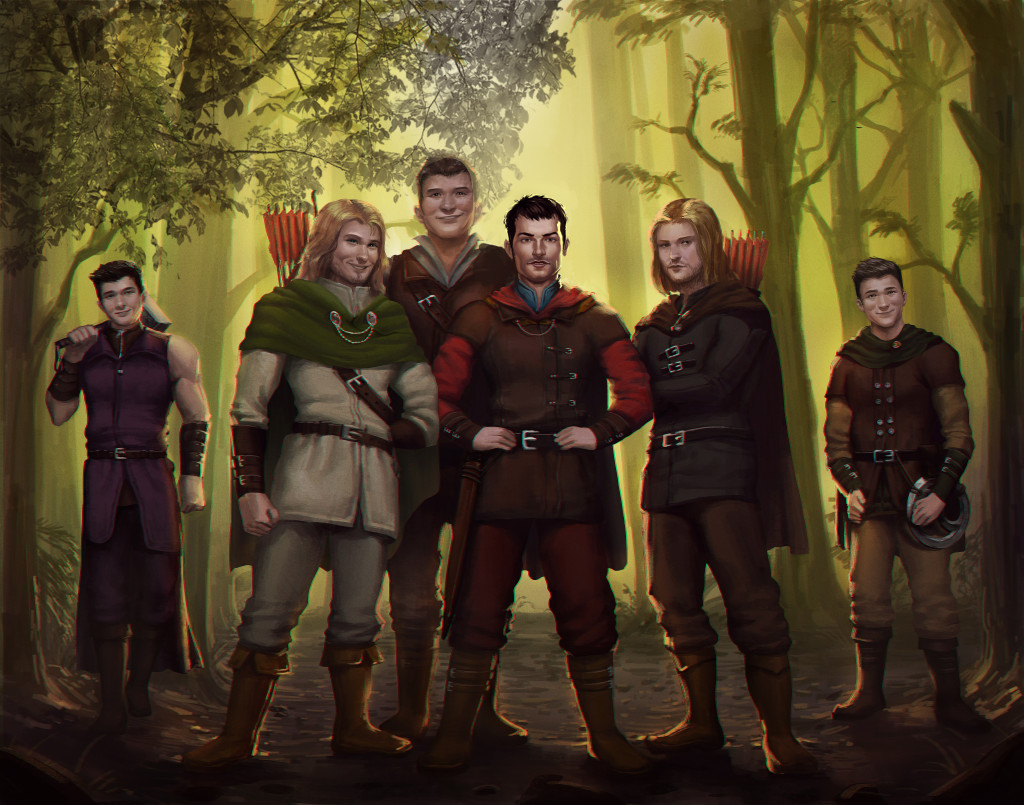 After a substantial amount of begging, I was able to convince Leo to take on one last wedding related task before the wedding… he managed to get all this done within a two week period.  He really saved the day.  While the original picture didn’t really need any triage—it’s a great piece of work—it just didn’t look too much like the people I was giving it to as a gift.  Leo had already worked with every one of the characters before, so I knew he had the capability to really put a decent finishing touch on the piece. 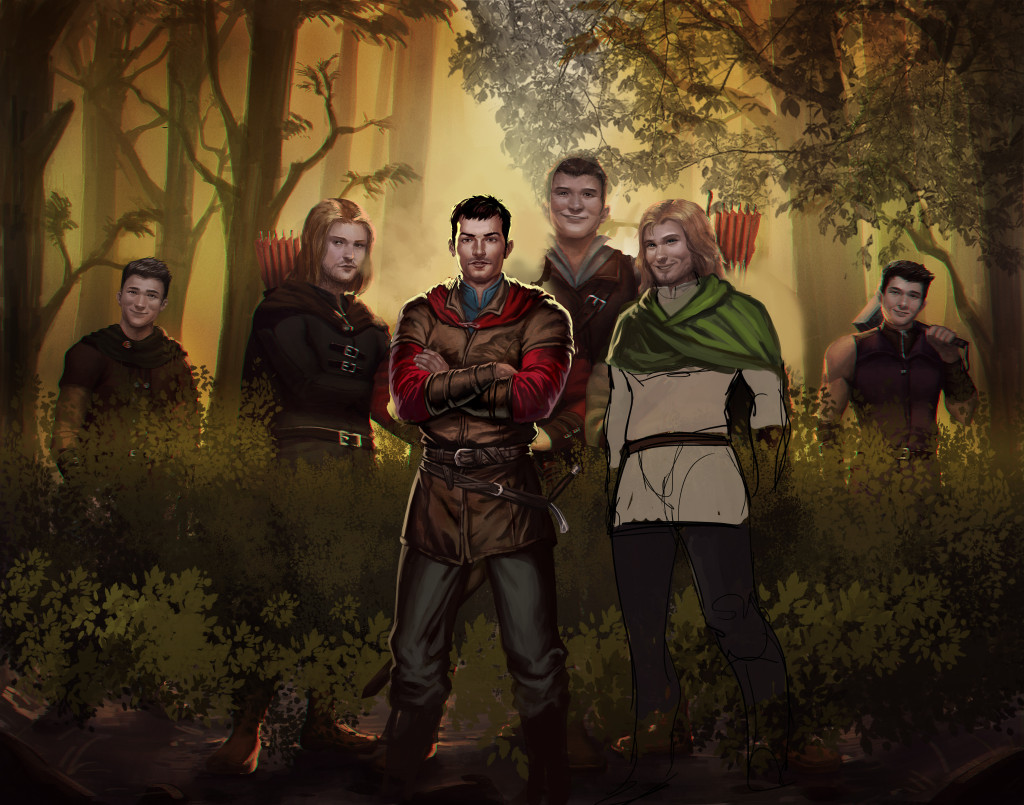 We realized early on that updating the faces meant that the bodies didn’t look quite right, so Leo went the extra mile and really pushed himself to get everything looking spectacular.  He really knocked this one out of the park. 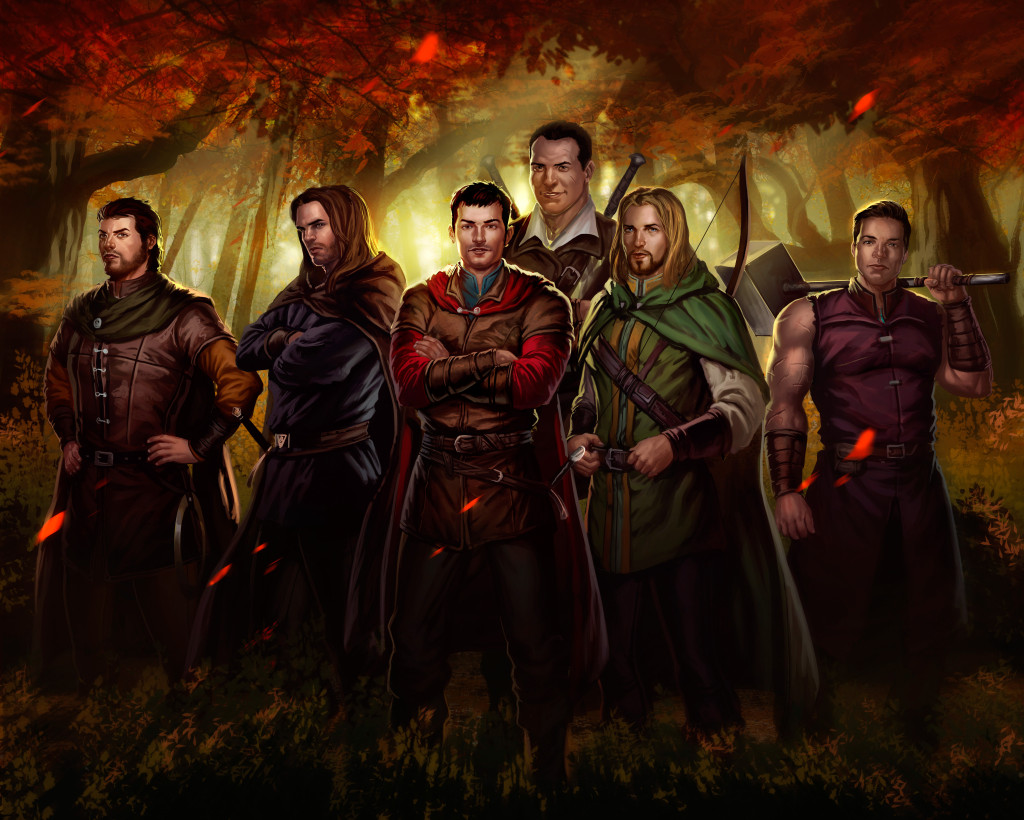 I’m also very happy to say that these ended up being a big hit.  I threw them in some decent picture frames and delivered them to the guys, and they opened them up the day before the wedding. 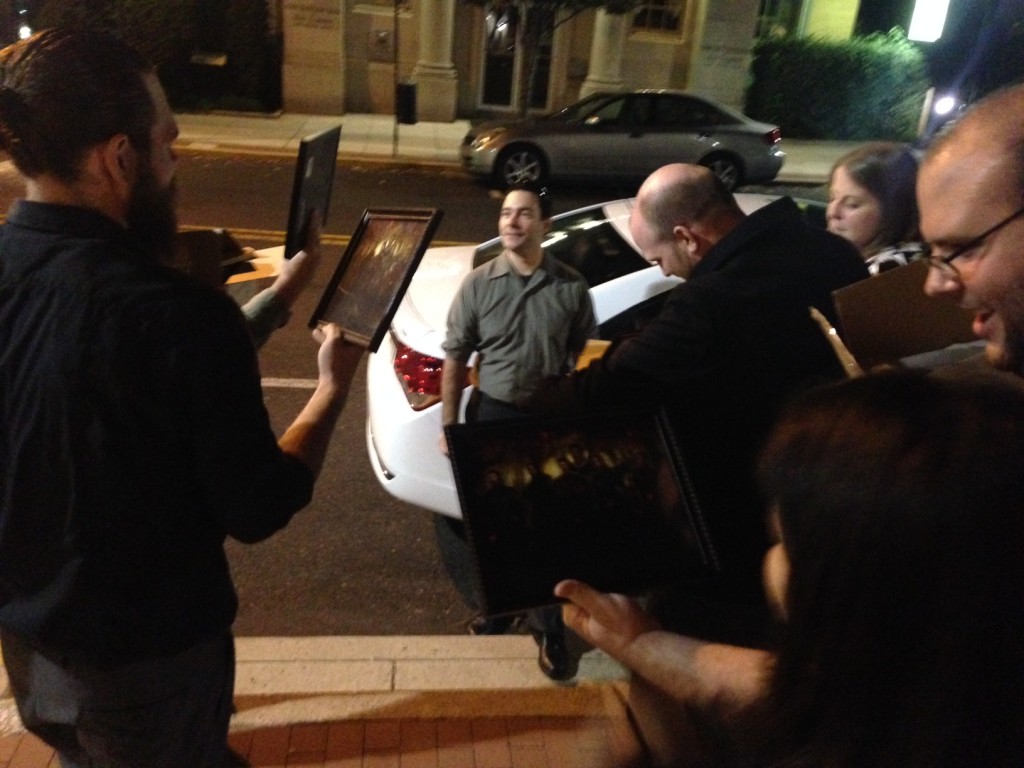 I want to thank all the artists for helping to make that such an awesome memory.  This was really an ensemble effort that goes beyond just what you see here.  It’s possible only because of all the work that people have been doing over the past two years with these characters, and I could not be more appreciative of all those labors.

I know one of the guys already has it hanging up in their house.

Let me send you off with one more picture.  This is all of the guys in real life (plus the happy bride, of course!): 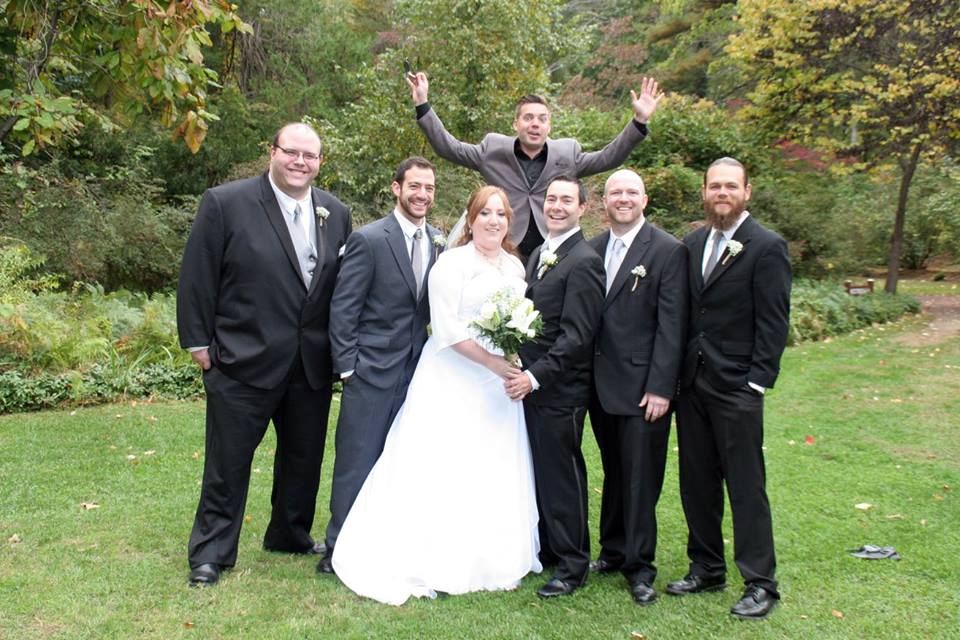