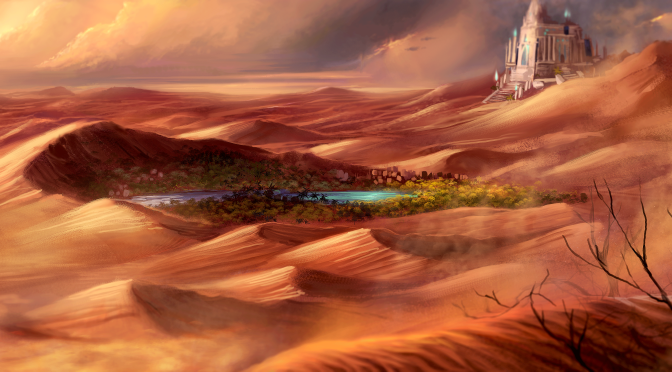 Happy Thursday to everyone out there!

It has been an especially long time since we had any environmental art, but all that’s about to change riiiiiightttttt… now.

The Bindings of Fate was a great way to establish a world that had been swimming around in my mind for seven or so years, but it was As Darkness Falls that really let me explore that place.  With three sets of heroes going off in their own directions, there was a lot of ground to cover, from Kaos and his roundabout search for dragons to Steel Tip, taking the first steps into Blacklehn.

What really jumps out at the end of that book was everything in western Raleigh, courtesy of Christopher, Holklund, Adelia and the newcomer, Hector.  Fostervilla was a magical, if tragic, city.  It was surrounded on all sides by either mountains or desert, and yet… somehow it thrived.  That is in no small part due to Deep Oasis, which Dena Helmi illustrated for us. 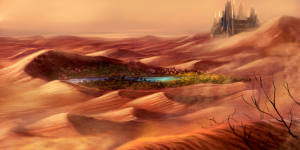 This version that we show here was the foundation for the piece.  It’s got a very gothic style temple in the background, which the people of Fostervilla would pray to Hudorian, the god of water, for life and fauna to grow and provide sustenance.

While that was all well and good, Dena went an extra step and gave us a version that would better depict the greek/roman style architecture that inspired the Tellest pantheon.  She also added the hellish deathwinds for good measure.

Enjoy this last environmental piece of the year.  We’ll be back with more in the middle of January!