Hello everyone.  It’s Monday, and that means comics.  The only problem is, at the moment, we’re actually out of completed pages! I’ve got most of Inner Demons written, but it’s been taking a little longer to get them storyboarded and inked than we originally thought.

One of the reasons for that is that Leo was practicing his hand at these comics before I came on board.  He was working on a very plot-thin premise just to see if he could pull off the style (and we can see that he could).  Along the way, he realized that he had a lot of fans of that “story” and he asked me if I wanted to craft something around it.

So, now we have two comic book stories, including Demon Hunter: 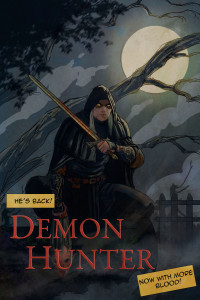 I’ve written a synopsis for this story, as well as the opening points of the tale.

One of the other reasons that we’ve had to step away this week is that we’re actively considering shipping this to comic publishers. We’ve got a couple of submissions out, for both this and Inner Demons (what’s with all the demons?).

And of course I can’t let Leo get away with not doing any Tellest-related work, so I’ve got him working his butt off on the new cover for As Darkness Falls – which just in sketch form looks amazing by the way.

Anyway, we’ll be back next week with at least one more page. Cheers!